CROSBY An arrest was made Feb. 17 in the murder of a Newport resident found Jan. 30 inside his home in the 17000 block of Lighthouse.
Armando Hernandez, 24, was arrested at his home in connection with the murder of Christopher Harrell, 32, by Harris County Sheriff’s Homicide Detectives.

According to the detective, Hernandez may have been just a casual acquaintance of the victim.
Christopher Harrell, 32, was found Jan. 30 by his mother and father when they went to check on his welfare. The couple had gone to the victim’s house following his supervisor telling his mother that Harrell did not report to work. Harrell had lived in the home since October.

Harris County ESD#5 Paramedics received a call at about 10:50 a.m. that Thursday. Seeing the victim was dead, they secured the scene for law enforcement.

Law enforcement sources, not homicide detectives, indicate two shell casings were found on the floor in the house.

Sources indicate there was evidence of illegal substances at the house. Sources hint that a relationship between the murder and the substances is possible.

Homicide Detectives reveal that a gun safe was found to be open inside the location but the shell casings of the murder weapon did not matched any of the guns found at the home.

Other law enforcement sources indicate some guns were stolen from the residence.

Detective Coleman confirms that apparently a Simple robbery. had occurred in connection to the shooting but would not reveal the manner (i.e. burglary, stick-up, or crash-in) or what items were stolen.

According to Coleman, We are still conducting a thorough investigation of this case. More arrests are possible. We put in countless hours of overtime on this case. Our squad did a first rate job in this initial arrest.

END_OF_DOCUMENT_TOKEN_TO_BE_REPLACED 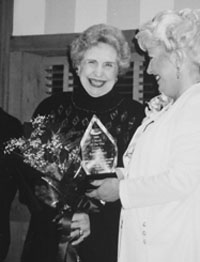 The Crosby/Huffman Chamber of Commerce held their Annual Awards Banquet on Valentine’s Day at The Monument Inn.

Frankie Pizano was entertaining as a Frank Sinatra sing alike.

Awards blustered with recognition of Business of the Year to Century 21 Life Changers, Inc., Employee of the Year to Diane Nash of Crosby Office Supplies, Jerry Prochazka was Volunteer of the Year as was Bud McCune of Huffman Lions, the President’s Award went to Luther Brady, Jr., and there were two Citizens of the Year  Earl Boykin and author /historian Edith Cook Cole.

Edith Cook Cole’s historic work for the Crosby/Huffman Chamber was told through her work Crosby’s Heritage Preserved  1823 to 1949, a book of historical memoirs taking readers back to early days of Crosby. That original edition was published in 1992 , financed by a donation from French Ltd. Corporation. In 2000 the Historical Committee reprinted Crosby’s Heritage Preserved underwritten by Crosby State Bank and the Chamber’s Historical Committee. It was printed by Grafikshop, a subsidiary of the Star-Courier. Proceeds from sales were dedicated by Cole to preserving historic sites in the Crosby/Huffman areas. Proceeds for her work now in progress, The History of Huffman are also dedicated to the Crosby/Huffman Chamber Historical Committee. Cole not only writes historical events but she makes it!

Earl Boykin was awarded his accolades from Don Hendrix, Superintendent of Crosby ISD. The history of service by Boykin to the Crosby Ambulance Service, Crosby Schools in numerous capacities including President of Crosby School Board, to his neighborhoods on boards for Newport Subdivision, to his country as an election judge, his church and his God were briefly outlined. His three decades of service were jestingly brushed off by Boykins as simply to tell his age.
Boykin’s accomplishments included serving as President of the Gulf Coast School Board Association last year.

Steven Myers submitted Bud McCune’s recognition as Volunteer of the Year Award. The long-time Huffman resident spent his life in service to those less fortunate through many volunteer efforts such as being a founding member of the Lion’s Club, where he is now District 2S2 Governor. A tireless advocate for special needs children, McCune has more than 30 years of service to helping students, the families and the community.

Venita Smith read the presentation as Jerry Prochazka was honored as Crosby’s Volunteer of the Year. His service as Principal of Crosby High School through turbulent years was punctuated by driving a school bus, coaching and a little custodial work. His efforts on behalf of the area soup kitchen in taking food back that Krogers was about to dispose of has become an integral part of area mainstay. He is remembered for his service in the military when most of his class went to war and his affiliation with the American Legion remains a reminder of his serious stance on service to the nation. His service to Crosby ISD includes being teacher, principal, on the Board and as Superintendent.

Employee of the Year, Diane Nash, was presented by Susan Armstrong of Crosby Office Supplies, Inc., her employer. Nash was recognized as pro-active, trustworthy, vigilant and fun. Her recognition is based on her flexibility, insight and dependability.

Don and Jan Cox with Karla Alexander are the owners of Century 21 Life Changers. The Cox couple started what is this year the Business of the Year as Newport Sales in 1976. Don opened Lake Houston Real Estate in 1978, later acquired a franchise with Century 21 and the company became Century 21 Life Changers, now in its current state of evolution, includes land and commercial real estate, a full service company. The long list of community service organizations the Cox family is involved in includes Kawanis, and every Newport Subdivision affiliation.

END_OF_DOCUMENT_TOKEN_TO_BE_REPLACED

BAYTOWN– Danny Long, athletic director and head football coach in Jacksonville ISD, has been approved by the Goose Creek CISD Board of Trustees as the new head football coach and campus athletic coordinator for Ross S. Sterling High School.
Longs career record at Jacksonville is 94-46, with seven district championships. During the other four of his 11 years there, his teams were the district runners-up.

In 2002, Longs team was the district champion and a bi-district finalist. In previous years, Jacksonville teams went as far as the area finals five times and the quarterfinals three times.

Following his acceptance of the Jacksonville position in 1991, Long led the Indians to the area finals, earning their first playoff victory in 19 years.

From 1986 to 1990, he served as assistant coach in Marshall ISD, where he was responsible for the varsity offensive line. The Marshall football team went to the state quarterfinals in 1988 and the semifinals in 1989 before winning the 5-A state championship in 1990.

In addition, Long served as regional director for THSCA from 1999 to 2001.

Long earned his bachelors degree in physical education from California State University-Long Beach and completed his masters in education and mid-management certification at Stephen F. Austin State University. He and his wife, Sarah, have one son, Joshua, who is 17 years old.

We are very excited to have Coach Long and his family joining us as part of the Goose Creek CISD team, said Dr. Barbara Sultis, GCCISD superintendent. He is recognized in numerous circles as one of the most accomplished coaches in Texas schoolboy football.

His record of achievement with student athletes is impressive, and he has a total commitment for the academic success of all students involved in athletics, she continued.

Long is expected to assume his new role sometime this spring.

END_OF_DOCUMENT_TOKEN_TO_BE_REPLACED

HIGHLANDS– Months of planning will come to fruition this Saturday, as the Pilot Club holds their annual Community Fair at the Highlands Elementary School. Festivities start at 10 am, and last til 3 pm.

The event lasts all day, and brings food and fun to all ages of the community. Proceeds from the event are used by the club all year long to fund their community improvement projects, scholarships, and other worthwhile activities both local and national.

Fish dinners will be cooked and served for $7.00 presale, or $8.00 on Saturday. Cooking will be done by the Henderson cooking team.

Other highlights include 28 arts and crafts booths, games by the Boy Scouts, Live entertainment acts all day long, such as the popular Highlands Toe-Tappers, Pic and Grin band, a raffle, information booths, Highlands Volunteer Fire Department, and the Blood Mobile.

The Silent Auction includes two signed balls: one is a baseball signed by Nolen Ryan, and the other is a basketball signed by the Houston Rockets “big” star, Yao Ming. This item alone is expected to bring a lot of interest and a crowd of people.

Other activities that are ongoing during the day are prizes for baking contests, and health screenings. In years past, thousands of young and old from the community have turned out, and spent the day having a lot of fun and sharing community spirit.

Speaking at last week’s Chamber of Commerce luncheon, spokesperson Teresa Cashion enumerated the uses that the proceeds have been used for in the past, and will be devoted to in the future.
She mentioned that nationally, the Pilot Club supports mentally impaired adults, through the Pilot Club Foundation. At the local level, the club has been active and effective in getting improvements in service at the Post Office, including Saturday hours and more parking.
Working with the County and TxDot, and the city of Baytown, they have been able to get the intersection of I-10 and Crosby Lynchburg Road, known as “Four Corners” landscaped with trees, shrubs, walls, and ground cover.

They have held a “Clean-Up Highlands Day” twice annually, with the cooperation of the County.
New teachers receive gifts and a welcome from the Pilot Club, too.

In the center of town, visual improvements have included developing a grassed park on the railroad property at San Jacinto Street, and at Christmas time coordinating banners to decorate Main Street.

Teresa Cashion, who has the distinction of being the first Miss Highlands pageant winner, said that this is only some of the areas where the Pilot Club has been able to improve the community. She also mentioned that many of the accomplishments are in conjuction with other groups, such as the Rotary Club, the Chamber, and local government.
All of this was a prelude to pointing out that the community needs to support the Fair, and have a good turnout and a lot of fun.