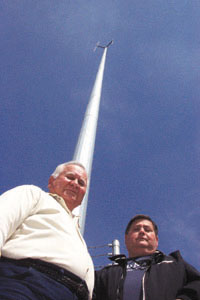 This tower, 199 feet tall, will provide clear and dependable communication for the Highlands Fire Department, whcih before had relied on relays from the Channelview VFD.

END_OF_DOCUMENT_TOKEN_TO_BE_REPLACED

CROSBY  A boy from Mont Belvieu was tragically killed while visiting his best friend’s house on Thursday, March 13.

Friends say the tragedy began as a get-together before an outing which was to include four-wheeling, last weekend.

Crosby ESD#5 responded to an accidental shooting call in the 5000 block of 6th Street at about 6:50 p.m.

Detectives say that although there were no signs of life in Travis Hawes, 12, LifeFlight Helicopter was summoned by medics to attempt a rescue. The helicopter was unable to fly because of inclement weather, so Crosby medics took the boy to East Houston Regional Medical Center in Channelview, where he was pronounced dead at 7:52 p.m.

Harris County Sheriff’s Detectives determined the youth had been struck in the right side of the chest by a .22 caliber bullet from a rifle.

Detective notes show that the son of Lanny Jeffcoat had been picked up from his mother’s Dayton home that day. The two went to Mont Belvieu and pick-up Travis Hawes and returned to Crosby. While at the Crosby home, a friend of the father visited. Shortly thereafter, a gunshot was heard coming from one of the bedrooms.

Detectives say Special Crimes Unit continues to investigate, and sort through evidence as to exactly what had happened, but all agree that there were multiple firearms in the bedroom where the two 12-year-old youths were playing unsupervised. As of presstime no charges had been filed.

END_OF_DOCUMENT_TOKEN_TO_BE_REPLACED

Deputies search for 4 after house robbery in ‘Old Crosby’

CROSBY  The Harris County Sheriff’s Robbery Division confirmed that a robbery of an elderly gentleman occurred March 12 in the Nelson Subdivision.

According to Harris County Sheriff’s Sgt. Pear, two men knocked on the Krenek Rd. door in the wee hours of the morning. When the man opened the door, the men entered the residence with a pistol in hand, they ordered the man to sit down in his living room. One of the men then went through the house searching. Shortly thereafter, the actors left with a small amount of cash.

Ambulance services from ESD#5 attended the resident following the robbery.

Witnesses tell investigators that the home was being watched earlier in the day by two men on bicycles.

The actors in the case of both the bicycle riders and the alleged robbers were described as black males under the age of 30 years.

Crimestoppers offers a reward of up to $5000 for information that leads to the arrest and conviction of persons perpetrating crimes. Crimestoppers can be contacted by calling 713-222-TIPS.

A burglary was reported on Church St. on March 11, again, witnesses tell the Star-Courier that two men on bicycles had been casing the building before it was broken into.