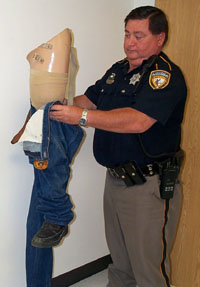 HIGHLANDS  Starting April 18 through the morning of April 23, the last of the full moon, Harris County Sheriff’s Deputies took action in three incidents that can only be termed bizarre.

An apparently trespassing ATV rider that attacked a resident when asked to pay to ride on his property may seem an over-reaction, but that incident and a nude driver lighting his crack pipe when approached by an officer seems no way to behave on Good Friday. A handy man that allegedly stole his employer’s prosthetic leg on April 23 sounds cruel.

On a sultry Good Friday Morning, about 4:30 a.m., Sheriff’s Deputy K. Thornton pulled a cruiser behind a pick-up parked on the off ramp in the 1700 block of I-10’s Westbound feeder road. Thornton reports he saw a piece of paper fly out the window of the 1988 Chevy truck  Don’t mess with Texas.

When the officer got up to the driver’s side window, the driver was buck naked  but then again, it was humid that night. What most got the officer’s attention was that the driver trying, with some exasperation, to fire up his glass crack pipe.

Now Deputy Thornton didn’t help with that lighting problem; instead, he asked the man to put a towel around himself and get out of the truck. Thornton field tested the pipe for cocaine and the result was positive. William Earl Horton, 46, of Houston, was charged with possession of a controlled substance.

That same day, close to 11:20 p.m., deputies were called to a private dirt driveway on Crosby Lynchburg at Barbers Hill Rd. about an aggravated assault.

At the location, officers met by a couple, the property owners, who reported being assaulted by several suspects riding 4 wheelers on their property without authorization.

The matron had been on the property, near the river, collecting money from riders who had been allowed to ride on their property for a fee. She reported to her husband that 20 to 30 riders from the north descended onto her land and responded to her demands for fees to ride with obscenities and proceeded down the river trail.

The husband, upon arrival at the property, blocked his front gate with his truck and waited for the group to return.

They returned , but in response to being told they needed to pay the fees to ride the members of the group stated they weren’t going to pay, and they were going to ride back the way they came.

The property owner reports at that time, as he stood near his truck, several of the group began hitting him in the head. His wife was punched in the left eye by a blond male with slender build, between 5’6″ and 5’7″, wearing a red and yellow motorcross shirt.

The property owner reports that a man of the same description as punched his wife, then ran over his foot and rammed the rear quarter panel of his truck. The four wheeler was described as possibly red in color and medium sized.

Harris County Sheriff’s Detectives are on the case now, anyone with information related to this case is asked to call (713) 967-5810.

On April 22, the last night of the full moon, at about 10:00 p.m., in the 600 block of Main St. in Highlands, an employee kicked out his employer’s residential window and made off with an old pair of blue jeans containing $43 in cash and his prosthetic leg worth $10,000, according to a 72 year old male complainant.

Harris County Sheriff’s Deputy Mike Smith was following up a criminal mischief call the next day when he was advised by the victim that the incident had involved the prosthesis.

According to Deputy Smith, the victim was upset because the loss of the artificial limb made it difficult for him to get around.

The victim named Mark Allan Hicks, his handy man, as the perpetrator of kicking in the window and snatching the jeans.

The complainant told Deputy Smith that he believed Hicks lived in the 500 block of Dell Dale. Smith went to the location and spoke with the mother of one of Hicks’ ex-girlfriends. She directed Deputy Smith to another location, a trailer park on Grand Street.

At the trailer, Smith rapped on the door and was answered by a woman identified as Hicks’ ex-girlfriend. After getting permission to step inside the trailer, Smith saw a man asleep on the couch. The ex-girlfriend identified him as Mark Allan Hicks. She further told the deputy that Hicks had asked a friend of hers to ride him to the complainant’s house and they both saw Hicks beat on the door, then kick out the window when no access was given.

Her statements to the deputy include that of the $43 from the jeans, Hicks gave the friend $20 for gas and threw the jeans with the leg out the window near the Monmouth exit on I-10.

Hicks was awakened to an arrest and from the back of a patrol car directed the officer where he threw the jeans.

Hicks’ bond was set at $10,000 for burglary of a habitation and was taken into custody at the Wallisville Substation.

Deputy Smith stated, When I returned his prosthesis back to him, he was teary eyed…that really touched my heart. I’m just glad I was able to help.