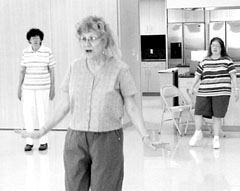 HUFFMAN After a year and a half, the I.T. May Community Center in Huffman is back and its bigger and better than ever before.

The center closed its doors in January 2002 for major renovations, forcing patrons to move to either the Crosby Community Center or the community center in Humble. The building reopened for use on June 2, 2003.

The first thing patrons will notice when they get to the community center is the size. During the renovations, the May Center expanded from 4,000 square feet to 18,000 square feet.

Rita Morrison, who works at the center, said that they now have three patios with ceiling fans and more rooms that are available for private party rental. Its a really nice place for families to get together such as baby showers or reunions. Morrison said that the center is also unique in its storage capability. We are the only Harris County community center with all of her storage upstairs. Previously, she said, the center was hampered by its necessity to rent storage space off-site.

Among the amenities added to the center are two full service kitchens, a computer lab and a ceramics room with a kiln. Future plans include installing a BBQ pit next to one of the patios. The building is designed to be in compliance with the federal Americans with Disabilities Act.

Michelle Thompson, the director of the center, said that while they will have more capacity to rent out space they will continue the programs that have become so popular to its users such as the May Belles and Beaus and the wood carving group.

Among some of the programs that will be offered this summer are gardening classes, baby-sitter first aid training, exercise classes and painting classes. Future plans include computer classes and GED training.

Beginning July 2 and lasting through July 25 there will be a childrens program. This program runs from 10 a.m. to noon on Mondays, Wednesdays and Fridays and will feature special guests include speakers from the Houston Zoo and the Ronald McDonald Magic Show.