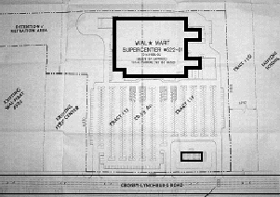 CROSBY  The local Reidland family allowed the sale of 20.21 acres of prime Main Street property to become a Wal-Mart Supercenter on June 2.

A new frontier has opened for the entire northeastern section of Harris County: demographic survey research indicates that the population of Crosby is destined to increase dramatically, a new subdivision is proposed for land to the west of the Supercenter, numerous businesses and property exchanges may hinge on the coming of a Wal-Mart Supercenter to Crosby.

The pioneer of this business boom and residential expansion is Don Cox of Century 21 Life Changers. Cox performed most of the work, solved arising problems and was foremost negotiator with C.B. Richard Ellis, the broker representing Wal-Mart Properties Inc.

Area construction contractors indicate that Wal-Mart has been taking bids to build the structure since at least as early as the middle of May.

The store is scheduled to be opened in the second quarter of next year, 2004 Cox explained.

There were numerous problems arising in negotiating the deal that the broker for Century 21 Lifechangers spent over one year handling. Initially, Wal-Mart was concerned with environmental integrity of the land. Following various laboratory investigations, the deal proceeded. Next an issue of where a proposed traffic light would be placed came to the forefront, the traffic light conflict nearly cancelled the deal. The disagreement centered on whether the TX DOT controlled light should be placed at the end of the parking lot or at a proposed roadway that would run east and west beside the property. Cox’s three month negotiation of a solution to the satisfaction of parties involved seemed to be his most proud moment in describing the dealings. Finally, issues arose over three natural gas lines somewhere on or near the property, two of the lines were abandoned and taken up, yet another had been capped. Easements were necessary and the owners of whatever pipe lines existed had to be located and make agreements.

Documents show the Reidland family originally owned about 384 acres in the vicinity. According to Cox, Allan, Gilbert, Kenneth, and the estate of Leslie, that is Ted and Rhonda Reidland, acting for Maudice Reidland, are the people that are really shaping the future of Crosby. According to Cox, each member of the family cooperated with each of his suggestions to facilitate the completion of the deal. As such, the family has bestowed upon east Harris County unlimited potential economic growth.

Those are the finest people in the world to do business with. said Cox.

There is about 250 acres open for residential development behind the property we are discussing. said Cox of a potential new subdivision.

So why would anyone believe that a potential growth boom is coming to this area? With Wal-Mart’s marketing effort in favor of this project, that’s a leading indicator in the commercial industry. They have confidence in this area. They have confidence that the growth is going to support it. They have confidence that there is a need for it or they wouldn’t put it here. Most of the time they put Supercenters only in high density areas. The company is expert in taking traffic counts and expected growth. I feel sure that Newport’s growth no doubt helped the company make that decision. I think it’s important to point out that with the recent bond election approval shows that the people of Crosby are wanting the better schools, economic and residential environments, nice new houses and all of that is related to growth. Crosby is going to have shopping that you don’t have to leave the area for nice things, that is going to bring in the restaurants, that’s going to bring other businesses, different franchises because of Supercenters, other companies have come to rely on Wal-Mart’s demographics studies.