Im pretty HOT, thanks to Gene Green and the Dems…

I was talkin to Miss Judy the other day and we got to comparin things today to what they were like when we were growin up.

We could, and had to, walk to school every day. Now, kids are picked up at every corner, in every neighborhood. God forbid the little darlings should have to walk a block or two sos the bus could make a few less stops! We took a sack lunch to school. It might have been baloney, but we lived, didnt we. Nowadays, the Government supplies free lunch, and breakfast, for anyone who wants it! (How do I get in on that one!).

Used to be that cities and counties built roads, supplied water and sewer, provided fire and police protection, and generally, stayed out of our way.

Now, the city and county geniuss build multi-million dollar sports stadiums for millionaire team owners, let them out of contractual agreements and then pay them for the early cancellation!

In the meantime, streets are falling apart, the sewer system money is gone, the county throws money away at the Central Plant because they had the money, on a vendors failure to perform, the big City is $150 million in the hole because of the mismanagement of the Genius of Lee. P. Brown, and the Gestapo taxing entities like the Appraisal District and certain school districts answer to no one with their teams of lawyers and conniving weasels.

Yes, Im pretty hot! I guess venting is a good thing sometimes. As you can see, there is plenty of stuff for this ol cowboy to write about!

Speakin of writin, I did a little research and found out why The Weenie, Gene Green was screamin about the redistricting plan for Texas. One of the three districts most affected and which will probably become Republican, is the district now controlled by The WEENIE himself.

Congreesman WEENIE, it seems that you are engaged in purely partisan politics! Now aint that cute! The pot callin the kettle black!

By the way congressman, in case you couldnt tell, I dont give a good rats rearend for you or your politics.

Now, the big question is, what will you do when you are defeated next election. I know, why not write about all your heroic friends! That should be real interesting.

STOP! See how these things make you crazy?

On to more pleasant things. Joe and Renee Anselmo just had their anniversary. Congrats, yall!

Many of you know Joe for his famous haircuts at the shop named after him. He loves his job so much that I saw him take a ten dollar bill from a customer..and give him twelve dollars back!! The best part was that the customer gave Joe a two dollar tip and Joe just said thanks! What a great place to get you ears lowered!

Spent much of the first of the week with good, honest folks- cowboy (and girl) poets, musicians, saddle and spur makers, radio DJs and other western folks at the Academy of Western Artists Convention and Awards Show in Ft. Worth. I hope to have a picture or two for you all next week.

I gotta go cool off, so last one out, make sure to shut the gate.

Just a Ridin,
Your Pard,
Lloyd

END_OF_DOCUMENT_TOKEN_TO_BE_REPLACED

HIGHLANDS– With a renewed vigor, the Highlands Chamber holds an awards luncheon and installation today, Thursday, July 10, at the Teapot Depot. Chamber members, the public, and friends of honorees are welcome and encouraged to come, according to outgoing president Wanda Asbeck.

Elections for directors have been completed, and at todays luncheon judges Mike Parrott and Tony Polumbo will swear in the new slate.

At the luncheon planned for Thursday, the Chamber will present awards to Peace Officers, Fireman, and Business of the Year. These will be announced at that time.

In addition, the Terry Davis award will be made. This honor goes every year to someone in the community that gives their time and effort to the improvement of the community in a selfless way. It is named in memory of Davis, who died after helping to clean up the community after Hurricane Alicia in 1983.

The new president, Charlie Farrar, is an officer at Woodforest National Bank in Highlands, and has been a past president of the Highlands Rotary Club and a Paul Harris Fellow.

END_OF_DOCUMENT_TOKEN_TO_BE_REPLACED 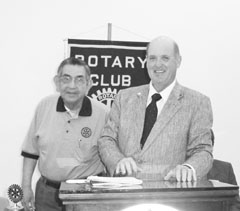 The banquet was held at the San Jacinto/Highlands Community Center. Over 100 persons attended, including officials from District 5890 of Rotary, which represents 55 clubs in the Houston area. This included Pat Mueller, Assistant District Governor, and DeLissa Simmons, Governor nominee for 2004-5.

In addition to swearing in new officers, a number of awards were made. Rotarian of the Year was given to outgoing president Joe Hausberger. By vote of the club, it was acknowledged that he had led an outstanding year. The award was presented by Gilbert Hoffman, a past president and previous Rotarian of the Year.

Hausberger was cited for his accomplishments: growth in membership by 20 per cent, contributions to the Highlands VFD radio antenna project, participation with other clubs in new Christmas decorations for Main Street, award of 8 scholarships to local students, support of the Little League and the Boy Scouts, a very successful Chili Feast fund raiser and raffle, participation in the Districts Convention, and winning of 1st place in their Art for the Hungry competition, participation in the Districts New Orleans convention, with the most members from any club, and plans to accept a new Exchange student for the coming year 2003-2004.
In his award remarks, Hoffman also noted that Hausberger had led the club with his own unique warmth and personality that made everyone feel comfortable and included.

Other awards that were presented included an Honorary Member status for Pat Lohan of the Chinquapin School, who for many years has been in chargeof Rotarys Interact Club at Chinquapin.

Also receiving recognition was retiring Treasurer Ed Palmer, who has held this position through about 15 presidents.

In a moment or two of levity, last years Rookie Dudes Chet Cotten and Stephen Miller retired, and the honor, so called, was passed to Jeremy Rosenkranz and Joe Hausberger, Jr. Also, Pat Robinson was awarded the Betty Boop award for best impersonation, and as she accepted the honor she showed us why she won.

Before the banquet, music was provided by The Baytown Big Band, and cooking was by the Henderson group and Charlie Ward and Stephen Miller and Robert Schmadl.

END_OF_DOCUMENT_TOKEN_TO_BE_REPLACED

HOUSTON  While most of us have long since given up on doctors making house calls, local ambulance riders got their new director to make wreck calls recently.

Dr. Matthew Minton, the new medical director for ESD#5 Ambulance Service in Crosby and Huffman, is serious about adequate patient care on ambulances and public health education. He is also part of the Texas Task Force On Medical Emergencies, now incorporated into the Federal Emergency Management Agency and is with the Harris County Public Health Dept.

If the reader had the misfortune of having to ride an ambulance from Crosby or Huffman in June and noticed a redheaded guy telling paramedics what is best to do, that was Dr. Minton.

He was welcomed to his new post officially on May 21. ESD#5 Board of Directors voted to make a change on that day that would potentially increase facilities for training, access new equipment and initiate county wide standards for paramedics.

The benefits of paramedics being under the same protocols is not just that in the event of a disaster the medications on-board an ambulance would be interchangeable and that medical treatment would be standardized at optimum levels but also it reduces cost because we come under the Harris County Health Dept., we would become immune to frivolous lawsuits. said Houston Hooper, Coordinator of ESD#5.

Minton expressed interest to the Star-Courier in initiating optimal standards for emergency medical services, public education through programs such as Shattered Dreams and County Public Health initiatives in immunization programs manned by paramedics.

Hooper explained potential benefits for the pact with the county as, The county is expressing interest in helping our immunization programs for school kids and in the event of a disaster, we can use equipment we could never hope to buy. Our paramedics will also have access to new training facilities and equipment.

END_OF_DOCUMENT_TOKEN_TO_BE_REPLACED 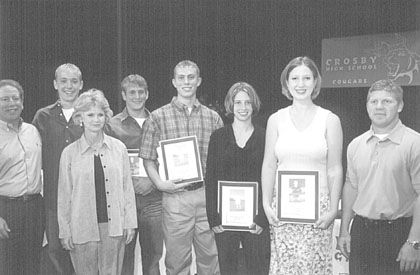 The Scholarships are in Memory of Jared Jamail, a student at Crosby High School who was killed in an auto accident. The scholarships are funded by an Annual Golf tournament in the Crosby area.