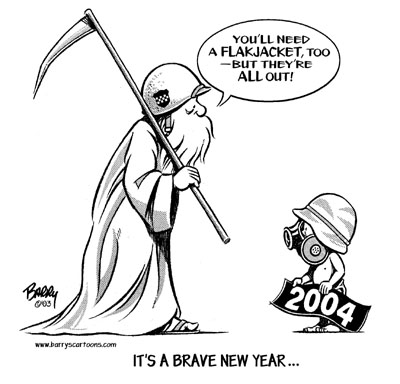 END_OF_DOCUMENT_TOKEN_TO_BE_REPLACED

CROSBY  Many here will glad to see 2003 over and there are those ready to greet 2004. The last year has been one of controversy and developments that are sure to change the face of Main Street.

One of the changes that drew most attention last year was that Wal-Mart Properties Inc. had found sufficient data about Crosby to purchase land and a Wal-Mart Supercenter behind and north of their current location is nearing completion.

Early reports from local developers indicated that the U.S. 90 to IH-610 was back on the 5 year plan, but later in the year it was learned that the plan has now been delayed a year or four. The project may now be completed in 2012.

END_OF_DOCUMENT_TOKEN_TO_BE_REPLACED 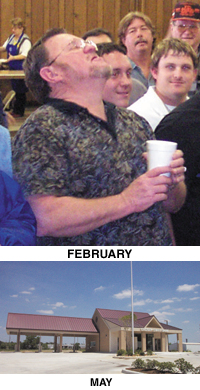 JANUARY
Thieves stole the tires and wheels off the Highlands Rotary Truck. Shawn Latta was named Baytown Police Dept. Officer of the Year.

The Huffman VFD approved land to build a new EMS station. Area school districts canceled elections due to a lack of candidates.

Cross Canadian Ragweed and Patrick Murphy were announced as headliners for the 2003 Crosby Fair and Rodeo. Highlands VFD battled a truck fire and hazardous materials spill which closed I-10 for six hours.

The Lynchburg Ferry was closed for three months for repairs and repainting. Crosby voters approved $45 million in schoolhouse bonds. Crosby veterans joined a protest in Dayton, where students were forced to attend classes on Memorial Day.

JUNE
Construction of a Super Wal-Mart was announced for Crosby. The 57th Crosby Fair and Rodeo was held. A record $11,000 was bid for the Grand Champion Steer.

Cases of West Nile Virus was confirmed in Harris, Liberty and Chambers Counties.

Huffman ISD announced a $22 million bond referendum. A community survey to determine the possibility of a YMCA in Crosby was held.

AUGUST
Congressman Christ Bell traveled to Israel as the guest of a Jewish political group to review tensions between Israel and Palestine. The Highlands Kawasaki Racing team set new track records at races in South Africa.

The Highlands Chamber of Commerce announced they would move Jamboree festivities to the Highlands Elementary School. Harris County said that they would do a feasibility study of the Lynchburg Ferry.

Huffman voters approved $22 million in schoolhouse bonds. The body of David Mixon, found in a Highlands canal, leading to the arrest of Chris Crow, of Baytown and Ollie Ford Jr. of Highlands.

Four were injured in a boating accident on the San Jacinto River. An armed robber struck at game rooms in Huffman and Dayton. Phillip Beck and Miranda Johnson were named Crosby HS Homecoming King and Queen.

NOVEMBER
Dr. David Hicks resigned as superintendent of Deer Park ISD. Crosby ISD announced they would begin an JROTC program in the Fall of 2004.

Crosbys Phillip Beck set a new state record for most receptions in a season.

END_OF_DOCUMENT_TOKEN_TO_BE_REPLACED

HIGHLANDS– Harris County Sheriffs Department homicide investigators are looking for clues which will lead the to the arrest of a person or person who injured a 13 year old Highlands boy in what is believed to be a drive-by shooting.

The incident occurred in the early morning hours of Dec. 18. Investigators say that at 12:54 a.m. they were dispatched to the 2000 block of North Battlebell in Highlands

Sheriffs deputies were told upon arrival by the mother that her son was in her bedroom talking on the telephone when they heard a loud noise. The son reportedly told the mother that he had been shot in the lower back.

Highlands EMS transported the boy to East Houston Regional Hospitals emergency room for examination. X-rays revealed that the boy had indeed a bullet lodged in his lower back.

A hospital spokesman said that because the bullet was in the fatty part of the back they chose to leave it in rather than remove it and the boy was released from the hospital.

The boy reportedly told deputies that since he was in the bedroom he could not have seen the shooter. He also said that he did not known of anyone who would want to shoot him and could not offer any possible suspects.

END_OF_DOCUMENT_TOKEN_TO_BE_REPLACED

CROSBY– A Crosby man was killed Friday, when his pickup left the road and crashed into a ditch.

According to the Harris County Sheriffs Department, Mark Emil Nicolella, 46, was driving west on Stroker Rd when he lost control of his GMC pickup as he tried to make a turn.

Investigators say that the truck drove into a ditch, breaking a fence post and coming to rest in a dirt embankment. Nicolella expired at the scene.

A veteran of the U.S. Navy, Nicolella was employed as a dispatcher for Last Trail Services.

A memorial fund for his daughter Ashley, has been established at the St. John Vianney Federal Credit Union, 625 Nottingham Oaks, Houston, Tx. 77079-6234.

END_OF_DOCUMENT_TOKEN_TO_BE_REPLACED 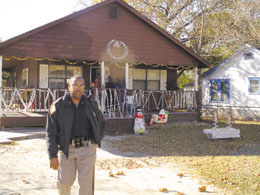 The Adopt-A-Family Program, which was coordinated by Deputy Bumpers, enabled indigent families to receive gifts for Christmas that they wouldnt have received otherwise.

The gifts were selected from the wish lists of each individual child. Some of the gifts consisted of dolls, games, bikes, clothes, etc. The families that received the gifts resided in Baytown, Highlands, Channelview, and the Cloverleaf areas.

Overall, the Adopt-A-Family Program was huge success this year. Everyone who participated expressed they were glad they were apart of such a positive program that touched so many lives.