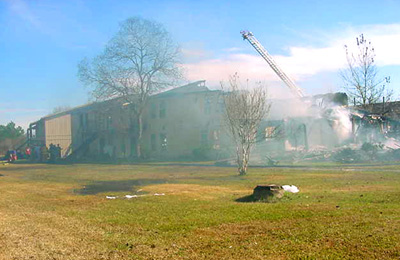 By LEWIS SPEARMAN
CROSBY  An apartment fire destroyed 16 units and displaced 9 families on Sunday morning.
Fire Arson Investigator H.W. Buddy Rice indicates Crosby Volunteer Fire Dept. responded to the blaze at 10:15 a.m. on January 11 to the Country Oaks Apartments in the 4015 block of US 90.
Nine adults, (eight women and one adult man) and ten children lost their homes.
A torrid inferno engulfed the entire two story wood sided multifamily dwellings located in the free standing structure on the northwest portion of the apartment complex, according to investigators. Due to building construction, the fire ravaged through the attic and sub-floor; the blaze consumed the building completely, Arson Investigator Rice indicated.
Observers say it was the northeastern end of the complex that burned.
Investigators say 10 fire departments, 30 fire trucks and about 100 firefighters assisted Crosby Volunteer Fire Department battle the blaze.
A firefighter sustained heat-related injuries during the battle. Arson Investigators estimated the damage at $500,000 but resident estimates are about $1,000,000.
According to Natishia Myles, Manager, the apartments management was unable to relocate the displaced families in the complex. Seven families are staying with relatives while two families were relocated to a hotel. Myles said, There is no need for any furniture  the families at this time have nowhere to put furniture. But donations of clothing, diapers, wipes for babies and toddlers, shoes, socks, underwear, toothbrushes with toothpaste, toys and nonperishable food items are needed. The children that lost their homes are ranging in age  an eight year old boy, a four year old boy, a to year old boy, a one year old boy, another child aged about one year old, two 10 year old children, two young boys whos ages are unknown, a young girl whos age I dont know.
According to Christy Orn of Realty Associates, Donations can be dropped off with us and well make sure they are taken to all the victims of this fire. 
Orns business is located at 302 Wahl Street, she added, Please remind our community that it is winter and these children have no clothes to wear.
Investigators determined that the cause of the fire was most probably due to a 4 year old occupant of an apartment playing with a cigarette lighter. Investigators from Harris County Arson Bureau examined the scene and conducted interviews.
Crosby Volunteer Fire Dept. returned to the scene that evening when prevalent winds rekindled the blaze inside the burnt out building.
There are no fire hydrants located near the apartment complex so water had to be shuttled in to combat the inferno.

END_OF_DOCUMENT_TOKEN_TO_BE_REPLACED

Teresa Campbell-Firefighter of the Year 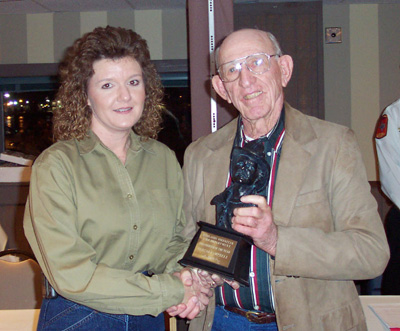 HIGHLANDS Deacon Tittel was back, not only as assistant fire chief, but also that emcee that gives away the gag gifts.
After a years leave, Deacons return almost overshadowed the more serious business of honoring the Firefighter of the Year, Teresa Campbell, and other top awards.
The event was the annual awards banquet and installation of a new board and officers, which was held by the HVFD last Saturday night at the Monument Inn.

Other major awards included the top ten reponders for the year, service awards for 1, 5, 10, 15, and 20 years of service, recognition of new officers and board, and elected and appointed positions, and truck lieutenants.
Special awards were: Citizen of the Year, Naomi Smith; Business of the Year, Kostka Wrecker Service; and Top Responder, Herman Bradford.
Junior Firefighter was recognized as Daniel Grabill, and Rookie of the year was also the top responder, Herman Bradford.
Chief Harvey Little reviewed the accomplishment and service history for the year. In particular he mentioned the radio equipment now located on our own antenna in Highlands, reduction of response time, improvements in billing, no major accidents or incidents in the year. Responses for the year were 1296 EMS and 308 fire calls, both figures up slightly from year 2002. Membership in the department now stands at 75, including 17 part time paid EMS crew members.
Assistant Chief Deacon Tittel reviewed the progress in training program, including a $2500 grant from the County, complete certification of all personnel at some state defined level, and new courses for driver/operators, and additional training in officer command structure, and water rescue.
EMS accomplishments were reviewed by EMS Chief Kacey Sammons.The included a $22,000 grant from TDH to upgrade the old ambulance chassis.