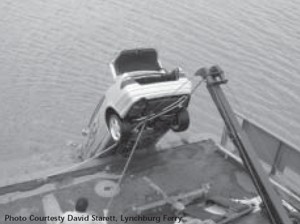 LYNCHBURG It was a dark and rainy night, as the story goes. And about 3 a.m., Nora Reyes,21, and a male friends were driving down Lynchburg Road to the Ferry, when they failed to stop at the docks edge, and plunged into the Houston Ship Channel.

They were able to escape from the sinking car, with the help of Ferry sailor Jason Farish, who jumped into the water and helped pull them to safety.

Officials have charged Reyes with driving while intoxicated, and she was booked into the county jail that night. The male passenger was not held.

[for full story, see your local copy of The Star Courier]

END_OF_DOCUMENT_TOKEN_TO_BE_REPLACED

Each year the Star-Courier is pleased to award its Star Citizen designation to a person who has contributed to the betterment of the community through their interest, commitment and hard work.

This year, the nominations were open to the public as well as consideratin by the editorial board of the newspaper.

There were a number of nominations, which have been distilled to one from the Crosby/Huffman community, Pat McPhee, and one from the Highlands community, Betty Michalsky.

We congratulate both of these outstanding citizens, and thank them for their contributions.

Pat McPhee is a financial planner who has represented the Edward Jones brokerage firm for about five years, in the Crosby area. He and his wife Barbara are well known in church, community, and civic affairs as well as having a group of caring and supportive friends.

McPhee serves the community on the board of the YMCA in North Shore, and in that function helps to oversee expenditures, fund raising, programs, and administration. He has also been a proponent of a YMCA in Crosby, if the community indicates it will support one.

Another important activity for both Pat and wife Barbara is their church, Crosby First Baptist. She is known for her excellent singing voice, and Pat is the teacher for a Sunday School class of Young Adults. He says this is the most important part of his life, adding I owe my success to my lord.

This success includes a life long friend, his wife, whom he went to high school with in Michigan. They came to Houston together in 1974, more or less for the adventure and a change from home. They moved to Crosby in 1978, and raised their daughter Mikele in Crosby schools.

Pat says he is blessed to live in a community such as Crosby, and thinks the Crosby school system offers the best education to anyone who will make an effort.

Pat is also an active Rotarian, with the Highlands Rotary club. He participates in all their community projects, but in his modest way says I think I always could do more.

Oh, he said dont forget to mention the informal morning breakfast club at the Crosby Dairy Queen. Now there is a fine group of citizens, who start my day right.

Betty Michalsky is a member of Pilot Club of Highlands, and was nominated by several people who are aware of how hard she works for the Highlands community, never stopping from one project to the next.

She has been active in the landscaping of the highway at 4 corners (S. Main Street and Interstate 10). She also worked on the landscaping around the gazebo and flagpole at the old railroad station site on San Jacinto and Main Street. She has appeared many times in the columns of the Star-Courier.

[for full story, see paper copy of The Star Courier]