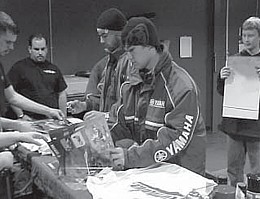 Nationally known Supercross Racers, who were in Houston to compete in Reliant Stadium, stopped in Highlands on Friday to sign autographs for fans at the Tejas Motorsports Shop. Seen above are David Vuillemin and Chad Reed. Also scheduled to be present were nationally known Tim Ferry, Ezra Lusk, Heath Voss, Mike Brown, Kelly Smith, and Danny Smith. All are members of the Yamaha Factory Racing Team. Tejas Motorsports hosted the event, which included a display of Supercross Bikes, and Refreshments and Door Prizes.

END_OF_DOCUMENT_TOKEN_TO_BE_REPLACED

By LEWIS SPEARMAN
CROSBY  When a local man became reported missing on Feb. 8, detectives began to investigate and a mounted volunteer force came to town to the rescue or find out what happened.

Mystery surrounds the disappearance of Tyrin Arcenaux, Monday, Feb. 9, at 4:00 a.m. his car was found on U.S. 90. His family had reported him missing on Sunday.

Harris County Sheriffs Detectives, Marine Division, and Texas EquuSearchMounted Search and Recovery Team have combed the vicinity and waterways where the car was discovered, but as yet there is no rescue or recovery. On Sunday, Feb. 14, Texas EquuiSearch was back dragging under the Beaumont Highway in hopes of locating a body. As of Tuesday, nothing has been found and hope is waning of finding him.

The Harris County Marine Division told Homicide Detectives that the 50º temperature of the San Jacinto River would indicate several days would have to pass before a body would float to the surface, and then possibly miles downstream from where it entered the water.

When Sheriffs Deputies released the car to the family , Texas Equuisearch Director Tim Miller looked on. In his account, a woman opened the door and took something from the front car seat. She then scampered away with whatever she had found there. Miller says he turned to a deputy and said, Well, we could possibly be looking at a murder in this case.

Well, our volunteers put helicopters (they are kind of expensive to operate,) 4 wheelers, horses, infra-red cameras, air scent dogs, and side-scan sonar to try and find him but we have yet to find a trace of him. said Tim Miller, Director and Founder of Texas EquuiSearch, Our first concern is to find the lost alive, then to recover the body, only when a loved one is found can the family begin the process of healing.”

[for full story, see paper copy of The Star Courier]

END_OF_DOCUMENT_TOKEN_TO_BE_REPLACED

CROSBY  If the Crosby ISD Board of Trustees and the Texas Education Agency give their blessings, students will have two less days of instruction in the upcoming school year.

The district is seeking waivers from the state which would allow them to begin the fall semester two days earlier and to reduce the number of instruction from the state mandated 180 days to 178 days.

Dr. Don Hendrix, superintendent of the district, said that when the calendar committee made the recommendation for 2004-2005 they asked for two days less of instruction for students. These two days, he said, will be used for staff development. In order to keep the Fall and Spring semesters within 10 days in length of each other, Hendrix said that it would be necessary to start the Fall semester earlier.

Under state law, a district cannot begin classes before the week in which Aug. 21 falls. Crosby ISD would like to begin classes on Aug. 12.

Hendrix said that this is not an unusual request and that it would bring Crosby in line with other districts such as Galena Park, Sheldon and Goose Creek, which have opted to reduce student instruction days for staff development.

The district is scheduled to have a public hearing on the earlier starting date on March 22, when the board is expected to vote on the issue. If the board approves the waver request, Hendrix said, they should have little problem with TEA signing off as well.

END_OF_DOCUMENT_TOKEN_TO_BE_REPLACED

Nancy Oliver has served on the Crosby-Huffman Chamber of Commerce Board of Directors since 1996. She was Secretary from 1999 to 2003; chaired the Nominating Committee; and served on many committees including Banquet, Picnic in the Park, Community Clean-up and Economic Development.

Nancy co-chaired the Community Center Committee that researched the need and requirements for a community center in Crosby and met with Commissioner Eversole to request the project.

The Star Courier honored Ms. Oliver in 1996 as a Super Star Citizen of 1996. She serves on the Board of Directors of St. Paul’s United Methodist Church, Baytown. A past president of Baytown Little Theater, she has appeared in several productions, as well as serving as chairman of the make-up for productions and newsletter editor.

She is the mother of two grown sons and the proud bragging grandmother of oneyear old granddaughter Avery.

END_OF_DOCUMENT_TOKEN_TO_BE_REPLACED

Missing Superbowl Stage may be in Crosby

CROSBY  An abandoned truck and flatbed trailer which once held the stage used by Janet Jackson and Justin Timberlake and was stolen from Houston was discovered in Crosby last week.

Harris County Sheriffs investigators said that a blue 1995 Freightliner truck and flatbed trailer were found in the middle of the road, with the engine running, in the 400 block of McKinney.

The truck was traced back to a business on Maxey Road in Houston. The business owner, Lonnie Whitaker, said that the truck held the stage and other equipment from the show valued at $50,000. The stage alone was valued at $25,000, said Whitaker. The case was turned over to Houston PDs Auto Theft Division for investigation.

Recently, a posting for an entry stage was posted on the Internet auction site Ebay.

[for full story, see your local copy of the Star Courier]