If it glows in the dark, don’t eat it…

Suppose to have gone fishing this morning, but the weather aint cooperating and in more ways than one. Put some new line on three reels the other evening, cleaned out my tackle bucket from last year and sharpened my knife that I take fishing. Itll keep until next time.

A nice mess of fresh fish sounds good even though we had fried fish yesterday at the Pilot Clubs Community Fair in Highlands, good too!

One needs to eat more fish anyhow. Getting to where the chicken flu epidemic is spooking a lot of folks and the mad cow thing is too. Course fish have their problems too – if it glows in the dark, dont eat it.

Eat more peas and cornbread I reckon; give me some tomato and a chunk of onion please.

Managed to get in the garden this morning before it started to rain and played in the mud a bit following the tiller.

Ground is still too wet for me to plant. As I was tilling, I looked out over my neighbors back yard, and flying above was what looked like a Purple Martin. More than likely a scout and it was looking for my martin house.

After I went over the garden, I tromped over in my 10 pound muddy shoes and put up the bird house on the pole. The plastic birdhouse is all cleaned out from last years nesting material and ready for a new batch of babies. I like to sit outback in an easy chair, drink my coffee, watch the purple martins and wonder what the poor folks are doing.

Had a small box arrive this past week in the mail. The Mrs. ordered four tomato tree starter kids. Although I have doubts about the things making, but Ill give it my best shot. Says the plants/tree produce two pound tomatoes each and should produce 60 pounds of tomatoes. All I have to say is I have to see it to believe it. If they all produce, that is 240 pounds of tomatoes.

Reckon Ill be eating a lot of tomato sandwiches. Ill eat my words with it if they all make.

Would not mind putting up a few quart jars of tomatoes this spring. They stink during the cooking process as I remember. Back when the grown folks did all that canning back in Georgia, I stayed outside trying to find something to get into.

Lots to do as a chap: a woodshed, smokehouse, tool shed, barn, corn crib with the mule shed behind it to check out.

There was a large hog pen down the hill from the house, but only ventured down there when it was time to slop the hogs or on the way to the river.

That was the reaction of Hargrave High School senior Andrew Cherry when he learned that his oil painting Beside Still Waters,was named Grand Champion of the Houston Livestock Show and Rodeo School Art Contest. Cherry is an 18 year old senior at Hargrave High School in Huffman. He is the son of Andy and Brenda Cherry.

The School Art Program began with an idea that became reality in 1963. Although expectations were that it would take several years for the program to grow, the Show received more than 700 entries that first year. In the past 38 years, the program has grown at a brisk pace and now involves more than 300,000 entries. This year, said Cherry, 535 pieces of art made it to Houston for final judging.

Participants range from Kindergarten through 12th grade and must submit an original project based on Western culture, history or heritage. Projects are generally created in the fall and then judged by qualified individuals from the Shows School Art Committee.

Cherry, who has competed in the contest since the seventh grade, said that he set a goal of winning Grand Champion before he graduated. I was praying this would be the one. Its a wonderful way to leave. I wanted to leave a legacy at my high school.

Cherrys entry features a horse looking into a pond at its reflection. Cherry said that he chose this subject because he knew to win he would have to do something that was unique and had not been done before.

The win for Cherry was doubly sweet in that this was the first time that he seriously painted with oils. Last summer, he won a scholarship to study at the Western Art Academy in Kerrville under instructor Jay Hester. When I go into oils, I fell in love with it.

The road to Houston was long for Cherry. Hargrave High art teacher Donna Hardin said that Cherry had to first win Best of Show in a district wide art competition before he could show in Houston.

Cherrys next big day will come on March 21, when the art auction is held. Last year, the Grand Champion art project was hammered down at a record $135,000. Cherry said that each year the price for the Grand Champion rises and he hopes this trend continues. For his effort Cherry is guaranteed 10% of the sale price or $10,000, whichever is higher. He added that he is hoping his take would come closer to $15,000.

After he graduates, Cherry said that he plans to attend the Savannah College of Art and Design in Georgia, where he will study painting, film and cinematography.

The difference between school and prison 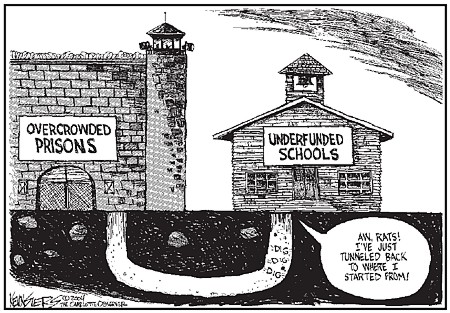