Easter: Made in China 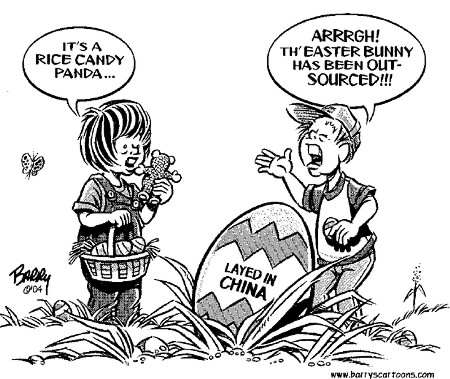 Get any April fool jokes pulled on you last week? As usual, one of the twins was up to his antic pulling them. He must get it from his mother because when I tried to tell her that Osama bin Laden had been captured, she told me that she had gotten her vanpool with that one.

Being it was the first weekend in April, we got on a bus trip to the First Monday Trades Day in Canton, Texas. Having rode on a bus good many times, I must say this one has the best air conditioner; Im taking a quilt next time.

Great weather for the trip and lots to see and eat there, not to mention the walking. One can rent one of the scooters by the hour but we did it the old fashion way, one foot in front of the other. So many scooters, pull wagons and shopping carts make slow walking. We avoided the buildings as they are so congested.

Went to where they sell the animals this trip. (My understanding is this is where the Trade Days first took place) That is a trip in itself or at least a good walk since it is not flat ground up there.

Such cute little puppies and some real pretty roosters too. The Mrs. had the nerve to suggest we could get a puppy and I said what for? She said it would give Four Dog some company.

Evidently she had forgotten that the Four Dog was found on side of the street in the rain when he was no bigger than a baking potato. After she looked and looked at the puppies and everything
else, she took interest in a Yorkshire terrier. She came back to me and told me they wanted $600 for the little fellow and she said it makes her appreciate Four even more.

Finally found the booth that sells the E Z Hooks. Thats like a long ice pick with a bend and curve at the tip to turn meat. I got three of them and chose the Bois darc (bodark) handle. Great for turning meat on a grill or pit. She concentrated on coffee cups but she says theyre for tea. At one time I went back to her and asked if she was trying to memorize everything in that booth. I love it when she rolls those round brown eyes at me.

Never did find any Bubba Teeth but I did manage to have mine with me. The Mrs. says she is embarrassed and refuses to be around me when I have them in. We did find a sitting bench later that day and I proceeded to smile at everyone that would look at me. Actually I didnt have to smile because I cannot naturally close my lips with that piece in my mouth due to the over bite.

It is so funny to watch the expressions on people when they notice my ugly teeth. They would look at me instantly look away, take a couple steps and look at me again with the funniest look on their face.

This one good looking lady looked and I smiled at her and she looked at me again and I smiled, she looked like she wanted to smile but held it. Id give a penny for her thoughts as I was busting out loud inside.

Lots of people tell the person who they are with to look at me and my teeth. It is so comical to
watch them whisper.