END_OF_DOCUMENT_TOKEN_TO_BE_REPLACED

BAYTOWN – T.J. Ford, star of the NBA’s Milwaukee Bucks, who grew up on the playgrounds of Highlands schools returned last week to give back to the community.

The T.J. Ford Foundation, in conjunction with LeapFrog School House donated $40,000 worth of of LeapFrog Personal Learning Tools and support equipment to Goose Creek CISD’s Pumphrey and Harlem Elementaries.

This past week, Ford was at Harlem with representatives from the school districts to present the grant.

The T.J. Ford Foundation made a $20,000 grant to the school which was matched by LeapFrog to purchase the equipment.

“The donation will allow teachers at Harlem and Pumphrey Elementary Schools to use PLTs in conjunction with the LeapTrack Assessment & Instruction System to upload data to school networks, conduct real-time formative assessment of each student’s progress. And reading and math, all these things are important in life,” said Ford. “If I had these things (LeapFrog), I would have been further than I am now,” he added.

Dr. Barbara Sultis, Goose Creek superintendent said that Ford still has relatives attending Goose Creek schools and it was this love of his family and education that prompted the donation. “I can tell of his compassion for his family.”

“Growing up, my parents stressed both the importance of education and giving to the community,” said Ford. “It’s critical that kids have the tools they need to receive the best education possible. I’m happy that LeapFrog SchoolHouse has teamed with me to help these students achieve success in the classroom.

As a child, Ford attended B.P. Hopper Primary, Highlands Elementary and Highlands Junior School. He later transferred to Willowbrook High School and attended the University of Texas before he was taken eighth in the NBA draft by Milwaukee.

After the check presentation, Ford stayed to meet with students and sign autographs for his fans.

END_OF_DOCUMENT_TOKEN_TO_BE_REPLACED

“Firefighter of the Year” by Highlands Fire Department 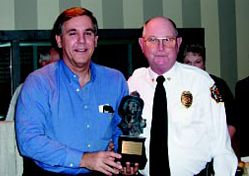 Highlands Volunteer Fire Department held their annual Awards Banquet and Installation last Saturday at the Monument Inn. The top award was given to Bobby Birdsong, who by vote of the membership was honored for “performing above and beyond the call of duty” as a volunteer fireman. Birdsong is also the Assistant Chief of the Department. Seen above, Fire Dept. Chaplin Jerry Ickes gives the award plaque to Birdsong, right. Other awards included Citizen of the Year, to Suzanne Bradford, Rookie of the Year to Nicholas Matula, and Business of the Year to Mark and Rhonda Sanford of Reeves Construction.

END_OF_DOCUMENT_TOKEN_TO_BE_REPLACED

Volunteers from the international humanitarian organization Global Peace Initiative (GPI), based in Huffman, recently sent one wave of relief workers and supplies to tsunami victims and are preparing to send more.

Equipped with a refurbished Boeing 747-SP, GPI is recruiting volunteers and money to fly supplies and medical workers directly to the affected areas. The first of what GPI hopes will be many flights is already on the ground with Houstonians on board.

According to Paul B. Joseph, GPI’s National Coordinator, GPI is the only non-profit with its own Boeing 747. Joseph said that initially some relief organizations were sending supplies by paying airline companies that could get the supplies only so close. That is why GPI offered the use of their plane for free.

The Global Peace One 747-SP can get closer to the affected areas because it has the ability to land on shorter runways than larger cargo or passenger jets. “We have the tool, the Boeing 747, but it costs money to go from the United States to Southeast Asia. Dr. Paul is always saying, We have the airplane. That’s a gift.That’s a blessing. But it does no good on the ground. We want it in the air,'” Joseph said. It costs $200,000 to purchase the 156,000 gallons need per round trip.

GPI is now working with aid organizations to fill the plane with supplies and trying to raise funds to cover the fuel costs. The group is fundraising in the local area of its home office as well as around the country. “We know that Houston has always come to the front of being compassionate in critical situations,” Joseph said.

GPI would like to see their plane being used for trips every few days with a minimum of 20 flights over ninety days. Flights originate out of Houston’s Hobby Airport loaded with 76,000 pounds of critical material.

The next flight will include inflatable boats and 90 specialized relief workers. The18 flotilla boat relief teams can bypass washed out roads and bridges and will help the most remote places that have not been receiving the materials and medical support they need. GPI Houston teams will establish relief camps for subsequent supply shipments of food and medicine.

For future flights, GPI is gathering cookware. Their team on the ground in northern Sri Lanka – the first relief team to reach some of the hospitals in the rebel-controlled area  are indicating that food and medicine is being dropped in sufficient quantities. However, all of their pots and pans were washed out to sea in the tsunami, and the need is critical for utensils in which to cook the food. According to GPI, the people are so desperate that many are trying to eat the rice uncooked, which is creating a whole new set of health problems.