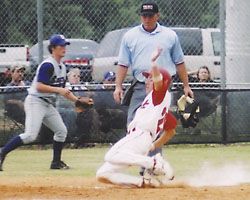 CROSBY – The Crosby Cougar Baseball team won district 19-4A with a 4-1 victory over the Dayton Broncos Friday afternoon at Cougar Field.

Just as Mike Scott did for the Astros in 1986, Sophomore Trey Buck pitch a no hitter in the deciding game to win the district. Buck was dominant as he struck out 10 Broncos to pick up his fifth victory.

Senior Dusty Ashworth had a key triple driving in a run to help the Cougars secure the victory.

Timely hitting and exceptional defense led to the victory as the Cougars were a perfect 9-0 at home this season.

The Coogs also won 20 games in the regular season- a first for Crosby baseball in a long time. The Cougars are now playoff bound, as they have a bye in the first round of the Texas High School State Playoffs. They await the winner of District 17 Third place finisher- Longview Pine Tree vs. the runner-up of District 18- New Caney.

The games against one of these opponents will be the weekend of May 12th. Sites and date yet to be determined.

The Cougars played a warm-up game vs. Barbers Hill at Barbers Hill Tuesday Night, as they prepared for their run at a state title.