Narnia bridges the gap between child and adult entertainment well 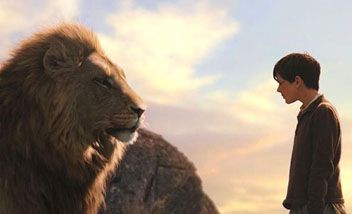 The Chronicles of Narnia: The Lion, The Witch and the Wardrobe
Running time:
135 minutes
MPAA rating: PG

The first film adaptation of the C.S. Lewis classic, The Chronicles of Narnia: The Lion, The Witch and the Wardrobe, can be described as part Lord of the Rings, with a dash of The Passion of the Christ and The Lion King. Its a little bit fantasy, a little bit Sunday school  and director Andrew Adamson (Shrek) keeps the two parts well-balanced.

The story begins with an air raid on London during World War II. The four Pevensie children: Peter (William Moseley), Susan (Anna Popplewell), Edmund (Skandar Keynes) and little Lucy (Georgie Henley), are evacuated and sent to stay in the country house of Professor Kirke (Jim Broadbent).
One day, while playing hide and seek, Lucy discovers a mysterious wardrobe in one of the many rooms of the professors sometimes-foreboding manor. As Lucy burrows deeper into the ominous armoire, she finds herself transported to the magical world of Narnia, where she stumbles upon a curiously out-of-place lampost plonked down in the middle of a snowy forest, and a shy faun named Mr. Tumnus (James McAvoy).

Lucy learns from the faun that Narnia has been put under a spell by the wicked White Witch (Tilda Swinton), who has banished Christmas and cast the world into 100 years of winter.

Lucy returns to tell her siblings about Narnia, but as she is the youngest, no one believes her. That is, until the four children have to escape the wrath of the housekeeper by hiding in the wardrobe, where they are transported back to Narnia.

The next-to-youngest child, Edmund, seduced by the White Witchs offerings of sweets, betrays his three siblings and winds up imprisoned with Mr. Tumnus.

Peter, Susan and Lucy, with the help of Father Christmas and a married couple of talking beavers, travel through the frozen wastes of Narnia in search of Aslan the lion (Liam Neeson), who will help rescue Edmund, and aid the children in fulfilling a prophesy that foretells the children will someday rule the world.

While the film is not up to the production standards or maturity of The Lord of the Rings, Narnia is an entertaining and often moving film for children, but still has enough to keep parents occupied.

What impressed me most was the performances by the children. Georgie Henley, who plays Lucy, is a joy to watch, and the other children do a far better job than Id expected. Also Tilda Swintons performance as the White Witch is Oscar-worthy. She creeped me out. Seriously.

The special effects are pretty good, but the CGI on Aslan wasnt as good as it shouldve been. He didnt look like a real lion; he looked like something belched out of a computer. But thats a minor quibble. I heartily recommend this film.