By LEWIS SPEARMAN
CROSBY  Two suspected drug dealers from Barrett Station with a gun in their Cadillac against deputies with drawn pistols allegedly, put some excitement in last Thursdays Main Street drive home beginning at 2:49 p.m.
According to Lieutenant John Denholm of the Harris County Sheriffs Homicide Division, a buy bust, (an undercover narcotics officer attempts to purchase illegal substances then other deputies close in to make and arrest) turned violent.


Denholm stated that the suspect vehicle hit an undercover officers car, then two deputies on foot, followed by hitting the marked vehicle, before crashing into the black truck. Two deputies were hit and slightly injured by the Cadillac and then it rammed a marked patrol car resulting in another officers shoulder being injured. The patrol car was spun around. The final crash was after multiple shots were fired into the Cadillac.
Two of the deputies waited until after the walk through to go to the hospital. Crosby Medics for ESD#5 took the other by ambulance to Hermann Hospital.
At least two of the officers had on vests that plainly stated Harris County Sheriffs Office.
Three deputies opened rapid fire hitting both suspects and a couple of nearby cars, the two suspects were flown by Lifeflight to Hermann Hospital.
Denholm seemingly defended why this particular area was targeted, There is a lot of dope activity on FM 2100, it has always been busy. We are not to far from Barrett which has always been a problem area. Of course too, here is a lot of dope in Highlands and Crosby.
After a hearing in the 338th District Court on August 28 more information came to light on the suspects.
Yantsey Gonzales, 29, of Magnolia Street, according to Denholm, has eight prior arrests including possession of a controlled substance.
Gonzales is currently in the hospital and on parole. A motion to revoke his parol has been made by the state Department of Corrections. He has been charged with Possession of a Firearm and Possession of 200 to 400 Grams of a Controlled Substance, namely cocaine, and Delivery or Manufacture of a Controlled Substance.
Charles Ray Lewis, 21, of Pecan Street, has been charged with Delivery or Manufacture of a Controlled Substance, Aggravated Assault of a Public Servant, and has had three prior arrests. Lewis is being held on a No Bond. at 1200 Baker Street after he was released from the hospital.
This Officer-Involved in a Shooting is being investigated by the Harris County Sheriffs Office Internal Affairs Division, the Harris County Homicide Division and the Harris County District Attorneys Office.

END_OF_DOCUMENT_TOKEN_TO_BE_REPLACED 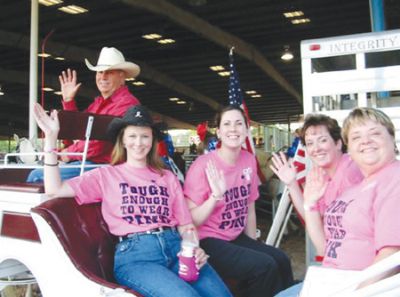 CROSBY  The funds, raised at Tough Enough to Wear Pink night at the Crosby Rodeo have been designated for breast cancer research.
This year the toughest guys and gals wore pink shirt including rodeo participants for the first time at the Crosby Fair & Rodeo on June 9. Those that wore the shirts were counted and sponsors donated funds to match that number to go to the American Cancer Society.


Recently, Shirley Rogers of the Crosby Fair & Rodeo handed a check for $2,500 to Michelle Hicks of the American Cancer Society, on hand for the check presentation were Belinda Berger, Community Resource Credit Union, M.A. Bengtson, San Jacinto Methodist Hospital and Halena Hellums, Director of the San Jacinto Methodist Cancer Center. To raise the funds, Community Research Credit Union and San Jacinto MH kicked in 50 cents each for every pink shirt that came through the gate on the night of June 9. Added to that was a donation of $400 from Crosby Fair & Rodeo and the public for a total of $1,196. To make it to the $2,500 goal (needed to dedicate the contribution to research,) San Jacinto Methodist Hospital kicked in another $1,304. According to the sponsors, the event will be repeated at the rodeo in 2007 with even greater success predicted.