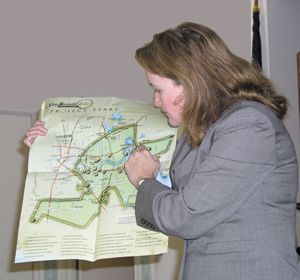 By BOBBY HORN JR.
LYNCHBURG An effort by Harris County Precinct 2 Commissioner Sylvia Garcia to recognize the historical significance of sites throughout East Harris County, got a vote of confidence from her colleagues last week.
Garcia says she was pleased that the Commissioners Court has approved measures allowing her plans for the Project Stars Historical District to advance.

The Project Stars Historical District is a joint effort between Harris County and the private sector.
The project, Garcia said, will serve as not only a tourist attraction but give an economic boost to the area. The project was the results of a quality of life survey conducted by Garcias office in 2003.
During the Dec. 5 Commissioners Court meeting, separate items passed which allow for bids to go out on two projects which Garcia says fit into overall plans for Project Stars.
The first item approved will add improvements to Precinct Twos David G. Burnet Park.
Many people may not be aware that David G. Burnet was the first President of the Republic of Texas, said Garcia. I plan to improve access, and eventually build a representation of his home at this site.
The second item provides for a series of historical signs recognizing the importance of the Lynchburg area in local and Texas history.
While the historic Lynchburg Ferry has a well-known place in Texas history as a result of helping to evacuate Texians during the war with Santa Anna, there is so much more to the entire settlement of Lynchburg, Garcia said. Not only in relation to the Battle of San Jacinto, but going all the way back to early settlers and the indigenous people of the area.
The signs will be similar, in terms of the information provided, to State Historical Markers that dot many Texas roadways, she said. And, she added, the signs would also fit within the framework of Project Stars.
Future plans include creating photomurals on oil storage tanks along Highways 225 and 134.
The murals will depict scenes from the Battle of San Jacinto and later capture of Gen. Santa Anna in what is now known as Pasadena. In total 26 historical sites will be recognized along what Garcia has termed the Independence Parkway.
Plans are also in the works to restore the Lynchburg Cemetery and have it recognized by the Texas Historical Commission.