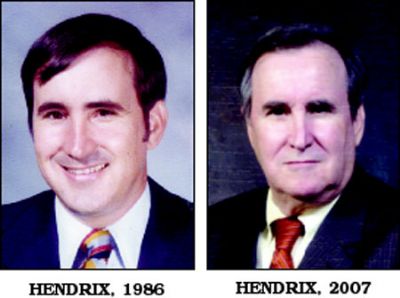 By BOBBY HORN JR.
CROSBYA driving force behind the academic success of Crosby ISD will step aside this fall after giving the district the past 21 years of his life.
During a meeting of the Crosby Board of Trustees, Dr. Don Hendrix officially announced his retirement as superintendent. The retirement, which will go into effect in November, caps a 43-year career in education.
This is not, in anyway, anything other than an amiable separation, Hendrix said, stressing that he enjoys working with the current board and that he feels happy with the direction of the district and that his decision was not based on the state of Crosby ISD.
I was once told that you will know it the end has come, and now I know, Hendrix said. For some time, Hendrix said, he knew his health was in decline. In the fall he had some heart issues, then a fall on a just-mopped floor at the administration building. There was a time when I could have caught myself, he said. But I couldnt.

Then, an incident in December, convinced Hendrix that he should reevaluate his position with the district.
I was at the Crosby post office, he said. The floor was wet and I went down hard. I thought I was going to hit my face, but I caught it on my shoulder. Then I found I could not get up. Laying there on the floor, with people around me. I knew it was time.
Before coming to Crosby, Hendrix served as assistant superintendent of instruction at the affluent Alamo Heights school district in San Antonio. Though by this point he had already earned his Ph.D. from the University of Texas, he was the only one of six finalists for the position that had not previously served as a superintendent.
The Board, under the direction of then-President Earl Boykin, however, looked past this and hired him with an unanamous vote.
Coming to Crosby, Hendrix knew that he was coming into a difficult situation.
He found that the students in the bottom of the academic scale could not read or do math well while those he were on the higher end were not challenged to take courses that would prepare them for college. In 1986, four students at Crosby High scored over 1,000 on the SAT college entrance exam.
We want out kids, when they leave Crosby, to be able to go onto any college campus in this country and compete on an equal footing with the other students, he said.
The district was also facing overcrowding at its campuses. The Drew campus alone, he said, was serving over 900 students, many in portable buildings. In 1986, there was only one grade being taught south of Highway 90. So why werent more buildings constructed? The community, he said, had deep scars remaining from segregation in the 1970s. Patrons argued over where to build the schools and how to service the students. The three pervious bond referendums had failed; the last one by a 3:1 margin.
Forced to bring any building program before a federal court for approval, Crosby came up with a plan to satisfy all the patrons: two identical elementary campuses on either end of the district with a middle school/ high school complex geographically in the middle. Despite the challenges, he said. I knew that we could turn things around.
Returning to Crosby was a sort of homecoming for Hendrix. As a youth he attended Highlands Elementary before moving to Deer Park. His success on the basketball court at Deer Park earned his a scholarship at San Jacinto College. He then left the Gulf Coast for Stephen F. Austin State University, where he earned his Masters degree.
I never made it a goal to come back to the area, he said. I stayed away from 1967 to 1986, going where the jobs came up.
During this 19-year span Hendrix went from being a basketball coach and government/ history teacher at a district 15 miles from the Mexican Border to upper class San Antonio. Hendrix also earned a fellowship from the University of Texas, which included an internship at the Texas Education Agency.
In the early 1970s he was recruited by Crystal City ISD Board president Dr. José Ángel Gutiérrez, as the only Anglo administrator in the district. Gutierrez was a founding member of the Mexican American Youth Organization (MAYO) in San Antonio in 1967, and a founding member and past president of the Raza Unida Party, a Mexican-American third party movement that supported candidates for elective office in Texas, California, and other areas in the country.
These opportunities, he said, taught him that academic success is not dependent on the wealth of the district but by parent involvement and by motivating students.
To this end, Hendrix set goals at Crosby to implement a solid reading program, full-day kindergarten and half-day pre-K program, and pre-Advanced Placement programs starting as young as the seventh grade.
While attending classes at the high school, Hendrixs son Dean made an observation that made an impact on how these programs were developed.
The kids here are smart,  he observed, But they dont know very much.
In addition to adding a fourth year math requirement, Hendrix said that he pushes each student to take as advanced classes as they can and not to settle for minimal skills.
He also said that he was proud of the work done for the special needs students.
One major change of the district, Hendrix noted, was the move to single-member districts in the early 1990s. Led by the late John David, Bill Fontenot and Gerald Blankenship, the move allowed for more minority representation on the board and cut down on the fighting in district, which had handcuffed Crosby prior to Hendrix.
Sheryl Shaw, the current board president, said that Hendrix would be remembered for his leadership in promoting academic excellence at all levels of the district.
Despite his successes, Hendrix said that there are areas where he felt he had not been successful. He said that he would have like to do more to motivate the students who fell in the middle between the remedial and the upper academic levels. He also said that he wished that he could have hired a curriculum director earlier rather than taking on the task himself.
When you try to do too much, you short sight something, he added.
Shaw said that the board is expected to meet later this week to set the perimeters for the search to replace Hendrix. The first order of business will be to decide whether to look internally for a replacement as Goose Creek and Dayton did or go outside the district as Barbers Hill did last year. 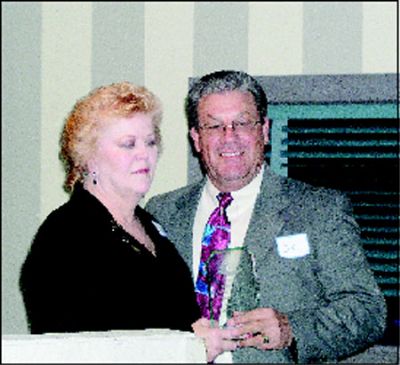 CROSBY Good food, fun and commaradarie were the keynotes to this years 2007 Chamber Installation/Awards Banquet, held last Saturday evening at the Monument Inn.
The Crosby/Huffman Chamber of Commerce annually awards outstanding citizens and members with recognition awards for their contribution to the community and the chamber.
Emceed by president Steve Coon, festivities were enjoyed by a crowd of over 120 persons. His keynote remarks included the importance of involvement, and its benefits. To illustrate the point, he gave an award to owners of the remodelled Dairy Queen in Crosby, and new members of the chamber. This award went to Mr. Lee Amin, his nephew Taimur Monsour, and other family members who were present.

The other major awards were as follows:
Employee of the Year, Kelly Dowlen;
Volunteers of the Year, Shalonda Dawkins of Community Resource Credit Union, and Ryan Konarik of Balance Chiropractic Center;
Citizen of the Year, Joe Anselmo and his wife Renee;
Business of the Year, United Community Credit Union;
Non-Profit of the Year, Crosby Church and its pastor, Keenan Smith and wife Lorrie; and
Special Presidents Award, Janice Kolin of SNE Realty.
In his remarks, president Coon thanked Don & Jan Cox for their work in organizing the banquet, and Crosby Florists for their donation of flower bouquets at the tables.
In addition to the awards, the evening included the swearing in of new and returning board members and officers, by State Representative Joe Crabb, as follows:
President, Steve Coon; 1st VP, Justin Brady; 2nd VP, Bob Ward; Treasurer Dianne Fleming; Secretary, Wendie Grant; and Parliamentarian, Keenan Smith.
Board members sworn in include:
Mike Amador, Susan Armstrong, Don Cox, Shalonda Dawkins, July Hain, Don Hendrix, Jerry Jones, Douglas Killian, Janice Kolin, Ryan Konarik, Larry Koslovsky, Kenny Shaw, Venita Smith, and John Sparks.
In noting the accomplishments of the Chamber in 2006, Coon highlighted the fact that they had moved to a new building, with the assistance of Dan and Jean Jones as landlord. 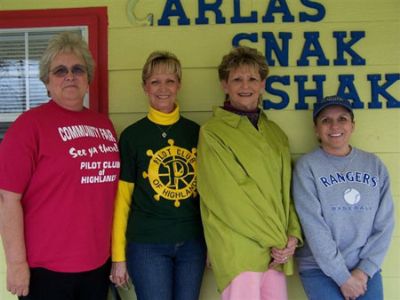 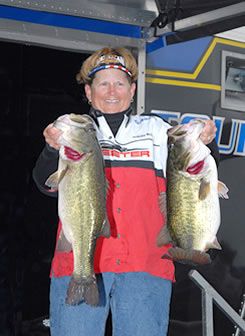 Juanita Robinson, 57, set two Women’s records during the Mercury Marine Women’s Bassmaster Tour’s season opener in Lake Amistad (Del Rio, TX). It was the first champion win for the Highlands native who began bass fishing with her husband in the 80s.
At the beginning of the third and final day of the tournament, Robinson was in eighth place with a two-day total of 30 pounds, 8 ounces. She trailed the leader by 8 pounds, 2 ounces, but by the end of the day she had caught five additional fish for a one-day total of 26 pounds, thus setting both the women’s single-day and three-day records. Her three-day total of 56 pounds, 8 ounces beat the record set last April by more than 23 pounds.

“It’s wonderful to catch 56 pounds. I’ve never caught 26 pounds by myself.” Robinson said.
On February 10th,Juanita Robinson took home a crystal trophy, $1,000 from Purolator for weighing in the biggest bass of the day, as well as a Triton/Mercury rig valued at $50,000. She will also be featured in next month’s “Field and Stream” magazine.
When asked what she would do with her trophy, Robinson looked at it and joked, “I’ll probably sleep with it tonight.”
Robinson will next compete in the Women’s Bassmaster Tour Championship on Alabama’s Lake Mitchell on Feb. 22-24.
“I’m going to go to Alabama and win that sucker too,” Robinson said. “Last week was a dream come true but it was just the beginning.” 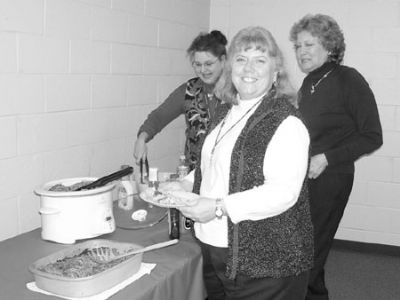 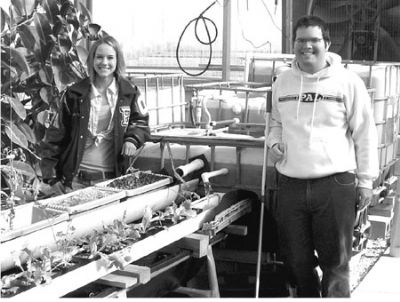 Recently, two students of the Barbers Hill FFA Chapter, participated in the San Antonio Stock Show & Rodeo, Agri-Science Fair.
Both seniors, Brian Bender and Ali Steadham conducted their research over the chapter tilapia fish project. Since November, the Agriculture Department has been utilizing the High School greenhouse corner for the project.
Using three 350-gallon polytanks for the fish. The drop tier system will provide the needed oxygen levels.

The third tanks flows into three gutters which provide growth space for cuttings, seedlings and our tomatoes. The gutters drain into a cattle water trough filled with plastic coke rings and algae to clean the water for the next step.
The cattle trough has a PVC pipe riser with a screen that allows only the top level to drain into a lower trough, much like a live well in a boat.
A sump pump is in the lower tank that cycles the water back up to the highest level tank to start the process all over again.
They have placed first in District, 4th in Area and 3rd overall at the San Antonio Show & Rodeo event. The project will continue throughout the school year with a fish fry and fresh tomatoes. To see our project in progress click on http://www.barbershillffa.com/Pictures.html