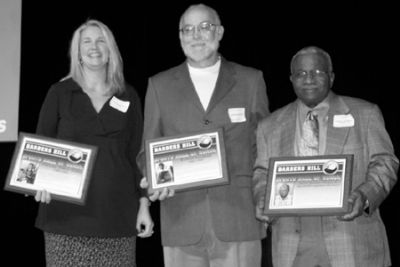 Robert Neylan
1965  1969
On the gridiron, Neyland was a member of the 1967 District Co-Championship Team and 1968 Bi-District Championship Team (he also served as captain of the squad). He was All-State in 1968; a member of the Texas High School North-South All-Star team in 1969; was All-District 1967 & 68 and recipient of the Team MVP Award in 1968.
After graduation he went on to play two years at Stephen F. Austin University. Neyland was also a Two-year letterman in basketball, averaging 12 points per game. He was a varsity letterman in track.
Christie Tilton Hahn
1989  1993
Hahn was a member of the 1990 Bi-District Championship Team; member of the 1992 Bi-District Championship Team; member and captain of the 1993 State Semi-Finalist Team; TGCA North-South All-Star Game 1993; TSWA All-State Team 1993; All-Regional 1992 & 1993; All-District 1990, 91, 92, & 93; District MVP 1992; All-Regional Tournament Team 1993.
In 1993 she had a Field Goal Percentage of 63.3%, averaged 14.5 points per game 14.5, and 8.5 rebounds per game.
She also played four years of basketball at Texas Lutheran University.
Norris Hotshot Thomas, Jr.
Special Recognition Honoree
The son of pioneer Chambers County sharecropper parents, Norris Thomas, Jr. attended a one-room school on Hatcherville Road in Mont Belvieu for his elementary education.
Rather than be bused to Liberty County schools, his parents paid a friend to take him to George Washington Carver High School in Baytown, where he excelled in football and track.
Following graduation in 1949 he married Jester Marie and was drafted into the Korean War where he served honorably.
In 1965, when Barbers Hill desegregated the schools, Norris was a key community leader in assuring a peaceful transition. His children, by their participation and excellence in athletics, also contributed to the successful desegregation of BHISD.
His eldest son, John Henry (66), was one of the two first black athletes to wear the Eagle blue and white. His daughter, Cynthia (67), played basketball and tennis at BH, and his other daughter Sheila was a 1972 graduate. His youngest son, Randy (83), played baseball and was quarterback and MVP in football.
Hotshot continues to be a leader in various areas of the community including an active church role and volunteer community service.
In addition to the three, the hall of honor also recognized four inductees from the 2000 class. When the hall was formed in 2000 there were so many individuals and teams inducted that there was not time to properly honor each of them. Since then, the hall has returned to recognize those again from the inaugural class. Recognized this year was Eva Susie Bradford, Golden Gordon Speer and the 1954 and 1955 Class A Regional Champion football teams.