Arrest made in 97 Indian Shores murder 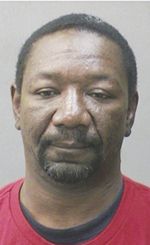 By BOBBY HORN JR. and LEWIS SPEARMAN
CROSBY An anonymous tip has provided the Harris County Sheriffs Office the break they needed to solve a 10-year old murder that occurred in Indian Shores, according to Lt. John Martin.
Frank Daniel Johnson III has been charged in the 337th District Court with the murder of Leonard H. Jacobson.
On Aug. 26, 1997 Jacobson, 75, a golf pro at the Indian Shores golf club, was found bludgeoned to death inside the pro shop where he had worked for the past 16 years.
Witness reported seeing a black male with dark skin, between the ages of 30 and 40 years running from the scene just after the body was discovered around 3 p.m. At the time of the murder, Johnson was 35 years old.
HCSO Spokesman Lt. John Martin said that two bloody fingerprints were found at the scene, but that they did not have anything to compare them to.
The break in the case came on April 23 of this year when homicide detectives received an anonymous tip that Johnson had committed the murder.

At the time Johnson was in the Harris County Jail charged with burglary and intent to commit other felony. Martin said that Johnson had broken into his ex-wifes residence and attacked her with a pipe wrench.
Noting the similarities between the two assault cases, detectives compared the bloody fingerprints from the Jacobson case with Johnson and found a perfect match.
During the initial interview, Johnson denied committing the murder. However, when confronted with the fingerprint evidence he confessed to the act, giving detectives a detailed account of the assault.
Johnson said that on the day of the attack he went to Indian Shores to play golf. He said that he was upset over a recent divorce, the death of a family member and the death of a close friend and that he thought a round of golf would lift his spirits.
He said that he hung out at the pro shop for a while hoping to join a game. Eventually Jacobson confronted him about loitering and ordered him to leave.
He (Johnson) said that this just set him off, Martin said. So he went to his vehicle, got a large ratchet wrench and began to hit Jacobson.
Johnson said that he then ran away, leaving the wrench behind. When he returned shortly thereafter he found other witnesses at the scene. He said that he even talked to some of the witnesses, telling them that he was leaving to get some ice for Jacobsons wounds, but did not return.
Martin said that Johnson has a criminal history. In July 2004 he was convicted of a felony theft charge in Baytown. He was sentenced to four years deferred adjudication. Apparently Johnson did not follow the rules of his probation because in December 2006 a motion was filed to bring Johnson back to court for sentencing.
Johnson remains in jail with a $50,000 bond on the murder charge. No bond has been set for either the burglary charge or the theft charge.