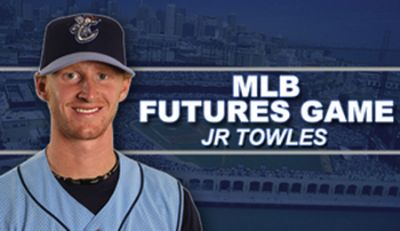 By LEWIS SPEARMAN
CORPUS CHRISTI  Justin Towles played catcher throughout the Crosby Sports Association and Crosby High School teams as he grew up here with his sights set on one day playing for the Houston Astros.
That dream moved two steps closer to reality as he was promoted last May 14 to AA League with the Corpus Christi Hooks; and he was recently chosen to play in the 2007 XM Satellite All-Star Futures Game. The game will play be July 8 at AT&T Park in San Francisco and airs at 3 p.m. on ESPN 2.
The most dangerous batting catcher in AA leagues now, Towles is the only representative for the Astros in the Future League. Towles will play on the U.S. Team, the League game represents 12 countries.
He won the Atlantic League Home Run Derby. In Class-A he was hitting .346 with a .549 slugging percentage at Lexington last season.
Towles has 19 runs, five doubles and three homes in 27 games with the Hooks. He is hitting .299 with an impressive .400 on base percentage. He is tabbed as the sixth-best prospect in the Astros organization.