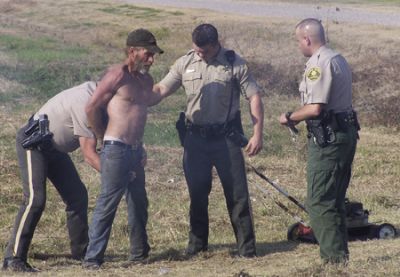 By LEWIS SPEARMAN
CROSBY  Precinct 3 Deputies wrapped up two breaking and entering cases this week and have steadily been working to solve the most prevalent and costly burglary threat for businesses and charities, copper theft.
Ken Jones deputies arrested a man on Nov. 2 that closely resembles the burglar videotaped inside B&G Package Store (East of Newport on FM 2100) taking the collection jar money for the Clothe-A-Child program.
Burglaries had been reported at an auto parts store, Shipleys Donuts, Blockbuster and Ace Hardware and the Cloth-A-Child donation money was taken from collection jars. Thus, the burglar was handled as the Grinch.
Sergeant Jasen Rabalais (a burglar buster of local note) had found a door to the package store pried open and actually set the alarm off himself attempting to see if the burglar was inside. The burglar was not but had simply absconded with the loot from a charity jar near the doorway.

Captain Gary Jones says Just a little while ago we ran a felony warrant on a suspect involved in burglary and maybe some other thefts of jars of money that have been setting on some of the counters of different businesses for charity. We took him into custody without incident, the way we always preferno injuries, nobody hurt. Now he is on his way to the station and we intent to execute the warrant.
Acting on several tips from neighbors and at least one Crimestopper tip, the deputies in plain clothes and uniform moved en masse onto a trailer not connected to power or water at Runneburg and Brodt. The suspect was mowing the lawn when deputies surrounded him and when they emerged with pistols drawn the suspect simply lay on the ground as instructed. With acres of open field around and lawmen all around, there was little else to do.
Deputies found a few items of clothing that he appears to be wearing on the surveillance video. They found some items not taken at the burglary but they are obviously stolen items that do not belong to him.
Observed were various types of leather and latex gloves and a black overcoat.
One of the items includes a dispatch radio tagged by Houston Police. Captain Jones indicates his department is working with other departments to determine what items found might have been reported stolen in other cases across the Greater Houston Area.
William Michael Stolich, 41, will appear before Judge Susan Brown in the 185 District Court on a third degree felony burglary of a building, according to one of the arresting deputies, Corporal Mike Connor.
The Corporal is quite a boon to Precinct 3 having himself come from the Harris County Prosecutors Investigative team to work in Law Enforcement, according to detectives. Connor has already dedicated numerous volunteer hours to undercover stakeouts of various charities around Crosby in quest of the copper burglars.
Deputy Gainey conducted the plainclothes surveillance of the suspect before the uniformed deputies closed for the arrest.
The stolen money would have gone to Clothe-A-Child, still needing contributions under the banner of Crosby Care, which in cooperation with local schools, selects participants from a long list of applicants, and based on need, shops at local department store for clothing and one toy. According to John Satherly of Crosby Church Clothe-A-Child just recently conducted a third annual benefit golf tournament at Sanctuary Golf Resort and Spa in Huffman and raised $10,000 for the program with 100 golfers and various sponsors. J.P. Mike Parrott won the tournament.