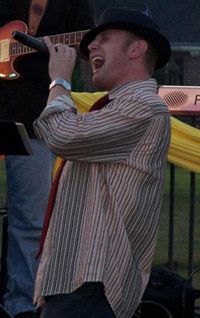 By BOBBY HORN JR.
CROSBY– Friends and family of Crosby product JJ Worthen knew that he had a good singing voice even before he won Channel 2s Gimme the Mike Houston contest in December 2004. Now, they can listen to him anytime they like.
Worthens full-length debut CD Devotee went on sale to the public Dec. 16. A CD release party is planned for Jan. 5 at Warehouse Live, 813 St. Emannuel in Houston. The doors open at 6 p.m. with the concert starting at 7 p.m.
While he was trained in classical music, industry experts say that his music is an innovative mosaic of pop, rock, jazz and funk. He performs and writes for numerous genres, and has a deep respect for music and musicians that educate as well as entertain.
Devotee shows this blend of styles in the tracks Nobody Knows, Overmedicated, Miami, and Satelliteas well as the title track Devotee.
A graduate of Houston Baptist University with a degree in music theory and composition when not in the studio Worthen can be found singing for the Lord at Riverpointe Community Church in Richmond.
Through his music and ministry, Worthen has touched lives around the world. He traveled with the ministries of Focus and Refuge from 2003 to 2006.
During the summer of 2000 he toured with the Continental Singers, traveling through 14 states in the Northwest United States.
In the summer of 2001 he traveled to England and Scotland with the First Methodist Church of Houston, Downtown to sing in the International Church Music Festival in Coventry, England for BBC Radio.