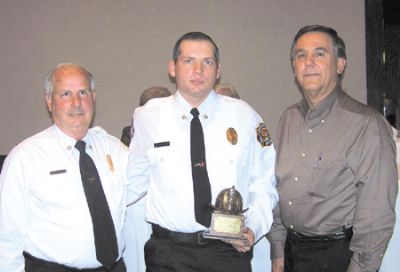 HIGHLANDSÐ The Highlands Volunteer Fire Department once a year relaxes just a bit, and holds a recognition banquet to honor the hard work and dedication of its fire crews.
Last Saturday night the department met at BradyÕs Landing restaurant for this occasion. The agenda included awards presentations, reviews of accomplishments in various categories, and plans for the coming year. Chief Harvey Little guided the ceremonies, and announced the awards.
Other presenters included Sam Tittel on training accomplishments, and Tracy Neathery on EMS status.
While the Highlands department took the night off, coverage of their responsibilities was provided by Crosby VFD, according to Little.
The top award each year is Firefighter of the Year, voted on by the members of the fire department from their ranks. For the second year in a row, Glenn Chisholm was bestowed with this prestigious honor. Chisholm was cited for performance above and beyond the call of duty as a volunteer. The award is given in honor of Cecil Kelly, a Highlands volunteer for 42-1/2 years before retiring in 1996. Kelly was on hand to see the presentation, made by Jerry Ickes to Chisholm.
Recognition was also given to the Highlands Rotary Club as Business of the Year, for their support of the department.
SheriffÕs deputy Anthony Thompson was cited for bravery, when he entered the burning Olde Cedar Inn to help evacuate patrons during the fire.
Chief Little presented service pints, and special awards to Chaplain Beau Rosser, and Jeanette Thompson and Samantha Hughes for their work. Citizen of the Year was Brian Remkes.

END_OF_DOCUMENT_TOKEN_TO_BE_REPLACED 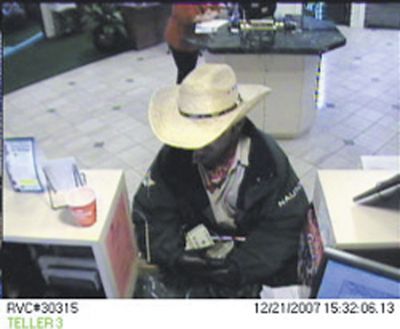 BAYTOWN The FBI Bank Robbery Task Force is seeking the publics assistance in identifying the Cowboy Bandit who threatened to be carrying a bomb during the robbery of a Baytown bank earlier this month. The task force has released photographs which depict the robber and the alleged bomb he used to threaten tellers at the Woodforest National Bank located at 6209 Garth Road in Baytown.
At approximately 3:32PM on Dec. 21, the lone white male entered the bank wearing a cowboy hat, lace-up boots, jeans and a red bandana tied around his neck. While displaying an object resembling a homemade bomb, he passed a note to tellers which read This is a bomb, hurry up, give me money now! The teller complied and the Cowboy Bandit calmly picked up the object and walked out of the bank with the cash. Bank surveillance photographs depict the Cowboy Bandit and the alleged bomb he carried into the bank. The alleged bomb was described as unknown objects connected with colored wires and black tape.
The Cowboy Bandit is described as a white male, approximately 22 to 29 years old, 507″, with a medium build and an unshaven mustache, goatee or beard. He wore a cowboy hat, red bandana, dark colored Nautica brand jacket, light colored shirt, jeans and lace-up boots. He also wore black gloves and dark glasses during the robbery. The Cowboy Bandit possessed a unique tattoo on his neck which displayed the initials PB or PNB in red ink. Tellers advised the tattoo may have been homemade.
Crime Stoppers is offering up to $5,000.00 for information leading to the charging and arrest of this bank robber. If you have any information regarding this case, please call the Crime Stoppers Hotline at 713-222-TIPS (8477), or the Houston office of the FBI at 713-693-5000.

END_OF_DOCUMENT_TOKEN_TO_BE_REPLACED 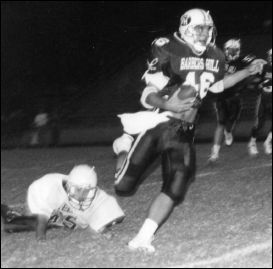 MONT BELVIEU Barbers Hill Sports Hall of Honor will hold its annual induction on Saturday, Jan. 12 beginning at 6 p.m. in the Sports Hall on the campus of Barbers Hill High School.
The BH Sports Hall of Honor committee chose Jeff Jones as the only inductee for the sports hall induction. Curt Ball will also be honored as a Special Recognition Honoree. Randy McCollum, Bill Kilgore, Joe Kilgore and the 1958 Regional Champion football team will all be brought back for special recognition as Highlight Honorees.
Inductee Jeff Jones was an outstanding all-around athlete for Barbers Hill High School from 1990-1994. He was a 3-year varsity basketball player who earned District Newcomer of the Year in 1992, defensive player of the year in 1993 and 2nd Team All-District in 1994. In track, he was a two-year varsity letterman. He also lettered one year as a varsity baseball player.
Jones athlete prowess was most notable on the gridiron as a member of the Barbers Hill Eagle football team. He was a 3-year varsity letterman, was named District Newcomer of the Year and 2nd Team All-District in 1991. He was named 1st Team All-District, 1st Team All-Greater Houston, 1st Team All-Region and Honorable Mention All-State in 1992. As a senior, Jones earned the title of team captain, team MVP, 2nd Team All-District and 2nd Team All-Greater Houston in 1993.

Jones had impressive career stats on the gridiron as he rushed for 3,696 yards, which is the Barbers Hill High School record; had a single season rushing total of 1,556 yards, another school record; had 55 career touchdowns, which still stands as the school record; and had a total of 23 single-season touchdowns, a tie for the school record.
At the collegiate level, Jones played at Sam Houston State University and was a 3-year letterman from 1995-1997. He also received the Big Hit of the Game Award in the SHSU versus Texas A&M game and again in the SHSU versus Nicholls State game in 1997.
Special Recognition Honoree Curt Ball grew up in Barbers Hill and quickly became a die-hard Barbers Hill Eagle. He lettered in football, basketball and track, but his primary sport was football. He was a valuable contributor to the undefeated 1940 and 1941 championship teams. Ball served on the first Barbers Hill Sports Hall of Honor Committee and provided invaluable information and financial assistance that has helped to make the BH Sports Hall of Honor a unique and valuable asset for the school and community.
Highlight Honorees for the evenings festivities will be Randy McCollum (1959-1963), Bill Kilgore (1960-1964) and Joe Kilgore (1962-1966). The 1958 Regional Champion football team, who were coached by Lloyd Kelley, Rod Purswell and Bruce Smith, will also be recognized as Highlight Honorees. Members of the team included David Cross, Al Mills, Kenneth Tilton, George Abbe, Raymond Fitzhenry, Chris Tilton, Leroy Stevens, Brian Honsinger, Woodrow Carroll, Douglas Dugat, Ken Hargraves, Jerrell Troutman, Richard White, Douglas Williams, Lee Wiley, Miller Lee Casey, Lynnwood Klaus, Hal Lyn Hooks, Leonard Mock, Paul Podraza, Carrel Smith, Milton Reeves, Vernon Moorehead, Lee Goodman, George Henry, Thurman Williams, Mike Lansford, Wilbert Weckwerth, Floyd Hill, Steve Barrow, Jerry Follett and Ronnie Duhon.
The Barbers Hill Sports Hall of Honor began inducting members in 2000, when they inducted 21 members, recognized five Special Recognition Honorees and inducted 13 teams. Since the initial induction, 18 other individuals have been inducted into the BH Sports Hall of Honor, one team was selected for induction; and seven Special Recognition Honorees were recognized.
The public is invited to join the festivities on Saturday, Jan. 12 beginning at 6 p.m. in the Barbers Hill Sports Hall of Honor, which is located near the south rotunda entrance into Barbers Hill High School. Tickets may be purchased at the door.

END_OF_DOCUMENT_TOKEN_TO_BE_REPLACED

By BOBBY HORN JR.
LIBERTY COUNTYMarch 4 will be a busy day for local elected officials and political hopefuls as candidates from both sides of the aisle will battle for a spot on the November General Election ballot.
LIBERTY COUNTY
In the Democratic Primary Sheriff Greg Arthur will face Eugene E.T. Merritt. The winner meets Republican Henry Patterson in the fall.
Tommy Chambers and Mark Beausoleil are seeking the Democratic nomination for county attorney. Wes Hinch is unopposed on the GOP side.
Running for Constable of Precinct 3 are James Cooper and Danny Frankum. The winner of the Democratic Primary will face James Miles in November. There are three candidates for the Democrats for Constable of Precinct 6. They are Royce Wheeler, John Joslin and John J.D. Davis. No Republicans are running for the seat.

Murrie Gene Kinney, Jr. is challenging current Democratic Party Chairman Nancy Archer. Her Republican counterpart, Lester Ray Wisegerber, is unopposed in his reelection bid.
Alan Foster will challenge John Otto, the state representative for District 18, in November.
CHAMBERS COUNTY
The only countywide race that will be decided in the March Primary will be for sheriff. Joe LaRive, who won the post in 2004 as a Democrat has switched to the GOP. He will face Hugh Sigers, whom he beat in the 2004 general election.
Running unopposed as Republicans are Gary Nelson, commissioner of precinct 3; Cheryl Lieck, county attorney; Margie Henry, county tax collector-assessor and Caroll Wilburn Jr., precinct 1 judge. Commissioner Mark Huddleson, a Democrat, is unopposed in his reelection bid.
EAST HARRIS COUNTY
One race that will directly impact Eastern Harris County is Precinct 3 constable. Ken Jones, the incumbent, faces two challengers in the Democratic Primary. They are Randy Rush and Bill Norwood. The winner draws Republican Tony Lewis in the fall.
There are six candidates vying for sheriff. Incumbent Tommy Thomas faces Paul Day and Michael Plagens in the GOP Primary while on the other side Adrian Garcia, Charles Massey and Guy Robert Clark are seeking the Democratic nod.
District Attorney Chuck Rosenthals decision to not seek another term has opened up a horse race in the Republican side. Seeking the nomination are Jim Leitner, Kelly Sieger, Doug Perry and Pat Lykos. C.O. Brad Bradford is the lone Democratic candidate,
Ed Emmett, who was appointed to fill the unexpired term of county judge, faces a challenge from fellow Republican Charles Bacarisse. The winner faces the winner of the David Mincberg-Ahmad Hassan battle.
State Rep. Joe Crabb will have to beat fellow Republicans Martin Basaldua and David Davenport if he wants to keep his District 127 seat. Joe Montemayor awaits the winner in the fall.
District 4 State Senator Tommy Williams will face Michael Galloway in the GOP Primary.
Local Congressmen Gene Green (D-29) and Ted Poe (R-2) have no primary opponents. Green will face Republican Eric Story in the fall while Poe has no Democratic opponent.
Ron Paul (R-14) is running for two elected offices. In addition to his presidential bid he is also seeking the Republican nomination for Congress. Friendswood City Councilman Chris Pedan is standing in his way.