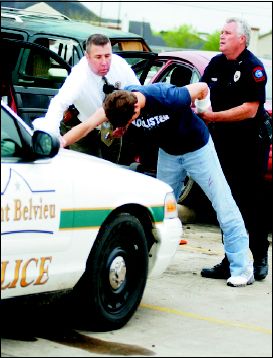 By GINA HARVEY Special to the Press
MONT BELVIEUFifty three Barbers Hill High School students in conjunction with the Texas Alcoholic Beverage Commission and local law enforcement and emergency personnel will be participating in the Shattered Dreams program March 11 and 12 in an attempt to bring about awareness of teenage drinking and driving.
The two-day school-based program promotes responsible decision making by high school students in regards to drinking and driving by showing them how irresponsible actions can end all dreams.
Unique in its design and powerful in its impact, Shattered Dreams is an educational experience that reminds us all of the dangers associated with drinking and driving. It reminds us that too many young lives have already been lost and countless others severely impaired because of the tragic consequences of underage drinking and drinking combined with driving.
The Shattered Dreams program involved a dramatization of an alcohol-related crash near the high school campus at 8:45 a.m. on Tuesday, March 11, complete with police and EMS response from the Mont Belvieu Police Department and Mont Belvieu Fire Department, Cove and Beach City emergency responders, emergency room treatment, family notifications, and the arrest and booking of the driver.
The crash scene drama played out in front of all juniors and seniors at Barbers Hill High School during the school day.
Throughout the day the other elements of the docu-drama unfolded. To give students a better understanding of the number of DWI-related deaths, an individual dressed as the Grim Reaper or a DPS officer appeared periodically throughout the school day to select a new victim.
The victims were taken out of class, made-up in white faces and dressed in black t-shirts to symbolize death, and then returned to their classrooms to continue their day. Obituaries written previously by parents were read aloud to the students in the room by law enforcement officials. By the end of the day, every student had one or more dead classmates present in the classroom or cafeteria with them to show a visual reminder of just how many lives are lost in a single dayone every 30 minutes in America.
On the morning of March 12, a wrap-up assembly and funeral will be held to feature those who played roles in the previous days drama, including the crash victims, the drunk driver, their parents and participating law enforcement and medical personnel. Impact statements from community members whose lives have been affected by teenage alcohol use and drunk driving will also be presented to bring closure to the program and reinforce its dual message for the teenage audience.
Counselors and other grief professionals will be available to students, parents and staff members as needed the day of the crash scene and the next day after the funeral assembly. The impact of the Shattered Dreams program typically has an emotional impact upon its participants and those who witness the events.