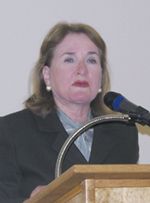 By BOBBY HORN JR.
HIGHLANDSHarris County Commissioner Sylvia Garcia, speaking to a packed house last week, said that road and bridge projects were one of the key priorities for East Harris County. Garcia spoke at a Town Hall Meeting held at the Highlands Community Center.
Other topics of discussion included illegal dumping and railroad quiet zones.
Several road and bridge projects are either in the works and will be in the near future. Garcia said that $667,000 has been budgeted for roads in Barrett Station. In Crosby, a $2 million drainage study is being conducted. T he county, she said, also has plans for work on the Burwell Road bridge, a road study for North Battlebell Road and $1 million was spent on construction on North Main and Wallisville Road.
One of the biggest projects happening in the precinct, she said, is a $8.8 million project for Thompson Road. Currently in the design phases, the county intends to improve the roadway between Ellis School Road and Spur 330 (Decker Drive).

She acknowledged that more road projects are needed, but that finances were tight. In the 2007 Bond Referendum voters allocated $39 million over five years for road and bridge projects. To put this in perspective, she said that is cost anywhere from $3 to 8 million per mile top build a road.
During the open discussion part of the meeting, the topic of traffic signals was brought up and a request for a four-way light at FM 2100 and East Canal was made. Garcia said that he would order a traffic study to see if it was warranted and if so would work with the TxDOT toward moving the project forward. I am seriously looking at red light cameras in unincorporated areas of Harris County, she added.
Quincey Allen, with TxDOT said that while many of the local road and bridge projects falls under state jurisdiction the department is unable to commit to any future projects.