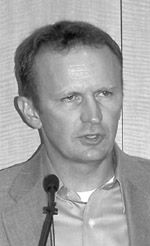 By BOBBY HORN JR.
CHAMBERS COUNTY– I made the decision as a father, not as a superintendent, said Dr. Greg Poole, of his decision not to bring his injured son back to the scene of an accident that took place in the early morning hours of April 26.
Poole, the superintendent of Barbers Hill ISD, said that he got a call around 3 a.m. saying that his son had been involved in an accident. When he arrived he found his pickup truck smashed against a utility pole and his 16-year old son bleeding from the mouth.
Poole sent his son to the hospital with his wife while he waited at the scene for authorities.
When a D.P.S. Trooper arrived, the trooper told Poole that he wanted him to bring his son back to the accident.
I told him I wasnt going to do it and that I would be responsible for his (the sons actions). He said that if I didnt bring him back I would be interfering, he said. I do not think I was interfering but he saw differently.
Poole was arrested on a charge of Interfering with a Public Duty, a Class B Misdemeanor. He was booked into the Chambers County jail, where he stayed between two and three hours. Poole said that he was released on a personal bond.
I did not try to use my position and there was no altercation, Poole said. I just did what I thought was right.
There have been rumors that alcohol was involved in the accident. Poole denied this. There was a lot of heavy rain and he hit a slick spot on the road. He just got his license and he doesnt have a lot of experience. He added that investigators found no evidence of alcohol at the scene.
Poole has not shied away from the issue either. He said that soon after it happened he sent a letter home to parents and posted a letter on the districts website
For two years I have represented Barbers Hill Independent School District is as positive manner as possible and it pains me more that you know to bring negative publicity to our district, Poole wrote in the letter.
Poole said that his son received a concussion and had some tissue damage in his mouth but that he was thankful that he wasnt hurt more. We are lucky to have our son alive and everything else pales in comparison to the joy we have that God spared his life, Poole wrote to parents. He also asked that parents keep his family in their prayers.
Pooles next court date has not been set.