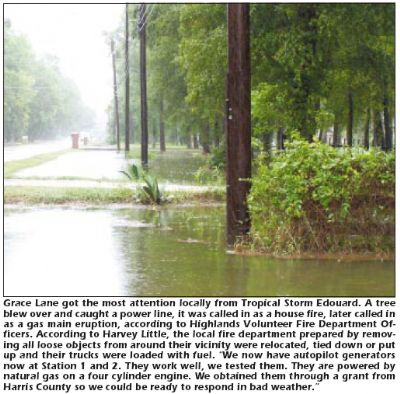 TEXAS COAST  Although heralded in categories as high as three, Tropical Storm Edouard was a panty waisted, fizzling fop that tinkled to the Texas shore in the wee hours of the morning, tipped over a few elderly trees onto power lines and whimpered.

The storm was light in the lightning and its 35 m.p.h. winds were not of the orientation to spawn tornadoes. But it wet Highlands with a rainfall of 6.82 inches, according to resident Letha Strouhal.

When they dont evacute Galveston Island, we usually dont have a bad one coming our way, flatly stated a native resident that declined to be named.

Forecasters said Edouards center could make landfall near Galveston, which is in the peak of its tourist season, when the citys population of about 60,000 doubles. No evacuations were ordered and local officials in the storm-seasoned town were merely urging caution. About 50 miles northwest, Houston officials asked residents to safely store large, heavy items outside their homes to prevent possible flying debris.

Before the storm Kroger, Arlens and Wal-Mart sold lots of canned meats and water. Gov. Rick Perry issued a disaster declaration for 17 Texas counties that could be in Edouards path. The state activated a number of emergency teams, including calling up 1,200 Texas military forces and six UH-60 helicopters, the State Operations Center said.

The Texas coast banks on tourism at the summer, even with 100-degree warmth and high humidity. Some 48 million visitors to the Texas coast spent almost $16 billion last year.

In many ways, Edouard could be termed best storm ever since a high pressure dome laid seige to most of the state and brought on drought conditions in July.

Edouard had maximum sustained winds near 60 m.p.h., and higher gusts. When it was crawling along at about 7 m.p.h., forecasters said conditions were in place for the storm to intensify and reported a drop in the centers pressure. In the early morning hours, very fortunately, its westward speed increased to 15 m.p.h., taking it out of empowering warm water.

Warm water is said to be the source of building winds for hurricanes and tropical storms. As winds drivnig the strom increase in velocity, the storm had less time to brew.

News that Edouard was not going to stop the flow of oil and gas induced the stock market to drop the cost of a barrell of oil again to $118.

The areas were lucky, those cans goods will last a long time, hopefully the fifth tropical storm of the season will be the last.