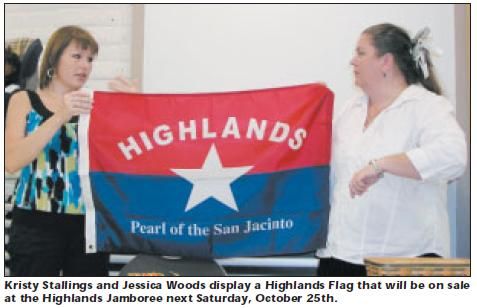 Highlands Chamber of Commerce held their monthly luncheon last Thursday, with a full program of information on the 52nd Annual Highlands Jamboree, the upcoming election in November, and over 100 services and programs offered by the Harris County Sheriffs department to the community.

Chamber representatives Kristy Stallings and president Jessica Woods told about the change in date of the Jamboree to Saturday, October 25, because of Hurricane IKE, and the wealth of events, some new, that will be present at the Jamboree.

The day will start with a Fun Run (1K and 5K) and a Bike Ride (12K) at 7 am from the Community Center. Everyone is welcome to enter, all participants that register early will receive a t-shirt. Walkers are also encouraged. Fees are Adults $15, Youth $10, Couples $25, and Families $45.

At 10 am, the Parade will go down Main Street, from Hopper School to Jones Road. The Parade Marshal will be the winner of the Terry Davis Award, James Brazzil, and the Organization of the Year will follow, the Highlands Rotary Club.

The parade theme this year is ONCE UPON A TIME and will consist of fire and police vehicles, business and organization floats, non-commercial floats, marching units and bands, classic cars, and much more. Judging and prizes will be awarded to the best units. Awards will be presented for Best of Theme, Best of Show, Best Non-Commercial, Best Commercial, School Spirit, and Antique Cars.

The Chamber has announced that the parade will take place, regardless of the weather, so prepare!

From 11am to 4pm, the Jamboree will take place at the Highlands Elementary School, both inside and outside. Crafts Booths, live and silent auctions, Karaoke, Kids Games, Food Booths, and entertainment will all be part of the celebration. Cub Scouts and 4H will be present, and a Blood Mobile from St. Lukes Hospital will be present. This is especially important this year, since the hurricane depleted many of the blood supplies in the area. The goal is to raise 25 pints of blood during the day, so please help.

New events include a Little Miss and Mr. Highlands Pageant, and since it is close to Halloween, a Costume Contest with secret judges. BOOO. All winners of the childrens pageant will get to ride in next years parade, and everyone will receive a trophy. Entry fee is $35, ages are from Birth to 5th Grade.

Proceeds from the Jamboree, except as noted, go to benefit the Chamber and its ongoing programs for the community. Some of these include the Holiday food drive and dinners for about 60 families, Christmas Tree Lighting in the Park and on Main Street, Cookies and photos with Santa, Partners in Education and much more.

Trautman said she is running to bring ethical leadership to county government, and ensure fair tax appraisals for all homeowners. As part of her community outreach and involvement, she pointed out that her campaign literature mentions active membership in several Chambers, including Highlands, Humble, and Crosby/Huffman.

Pat Lykos spoke about her experience as a judge, police officer, and attorney. She promised to restore public trust and confidence to an office that has been notorious recently for misdeeds of the previous district attorney while in office. She also promised reforms to the prosecutors office, to build back its reputation, based on ethics and professionalism. She is in favor of a regional crime lab, community justice centers, and a revamping of the jail system, so that there is more room for serious offenders and less serious crimes can be referred to treatment centers.

McCool emphasized that he wants to work with groups and individuals and schools in the community to provide information on safety and crime prevention.

Matt Forastier described the Life After Ike celebration to be held Sat. Nov. 15th at the Sterling- White Chapel grounds with community participation. 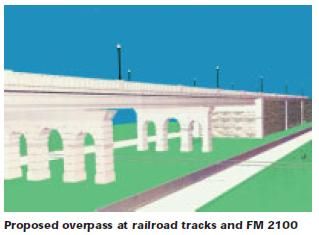 CROSBY  The proposed bridge over the railroad tracks at FM 2100 has been delayed again, this time the letting date is August of 2010, according to the Texas Dept. of Transportation (TXDoT) Public Information Office.

The delay is part of the Active Funds Authorization and the Project Planning Schedule. Samuel Anabae made the announcement.

That office was unable before press time to state exactly when the decision was made, what prompted the decision or how tentative (or likely to change) the decision was. There have been two delays already, first estimates were from September of 2008, next for January of 2009. This time they are on the active status for funding.

Connecting U.S. 90 to IH-10 and IH-610 continues on schedule. Consideration for the proposed Grand Parkway to be a toll road has been put forward, so the local outlook for being able to swiftly cross from Highlands to Huffman is bleak. The delay will however help the schools avoid transportation delays and an immediate cost increase in 2009. Still on the books for proposed projects is a Southbound exit ramp at FM 2100 which was to be let in September of this year.

Another consideration for the delay may lie in the local railways themselves. The Lafayette Subdivision Phase II was built in the 1860s by Texas and New Orleans Railroad, it is now owned by Union Pacific Railroad. It is the railroad that crosses FM 2100. One TXDoT study indicates Increased traffic capacity of the Lafayette Subdivision for current anticipated growth is essential., and A second main line of tracks from Dayton to Dawes will improve mobility. But the total plan would require $117, 000, 000. But No public benefits were identified.

The Overpass at FM 2100 and the railroad was to cost about $12 Million but that cost has almost certainly increased.

On October 14, Governor Rick Perry, (R.) in Austin, speaking to Associated General Contractors of Texas Equipment and Trade Show called on the legislature to address issues on transportation and infrastructure inadequacies. The Texas Governor stated that funds from the gas tax that go to the Department of Public Safety are needed for roads. He cited the funds as amounting to $1.2 Billion for every 2 years.

Perry says that the infrastructure of Texas roads is overwhelmed by more than 1000 people per day moving to the state. He indicates that the state population has grown 57% over the last two decades while roads have increased 8%. Over the next 25 years, road usage will increase 214% while road capacity will increase 6%. 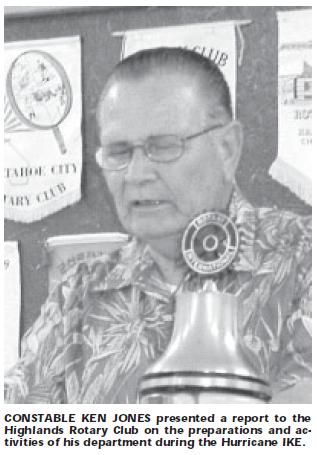 The Highlands Rotary Club heard a rundown on emergency preparations from one of the leading departments during the Hurricane Ike storm, and subsequent flooding and rescues.

Constable Ken Jones of Precinct 3 had prepared for the storm, by stationing his deputies at safe locations, such as the Wallisville courthouse, Hollywood constables office, Crosby High School, and a bunker at Champion Paper Company off old US 90.

Jones also prepared for this type of emergency by having table top training sessions with his staff twice a year, planning for such emergencies.

As IKE approached, he put his deputies on 12 hour shifts, and deployed them. From the day before the storm, Sept. 12, through Sept. 27, the department answered a total of 2,979 calls for service, Jones said.

Some were routine, such as traffic stops and burglar alarms, but some were dramatic, such as the rescue on Saturday, Sept. 13 of a woman with 3 children, in Castillian, with her roof blown away and high water stranding her. Deputy Ronnie Lee made the rescue, when others could not get there. 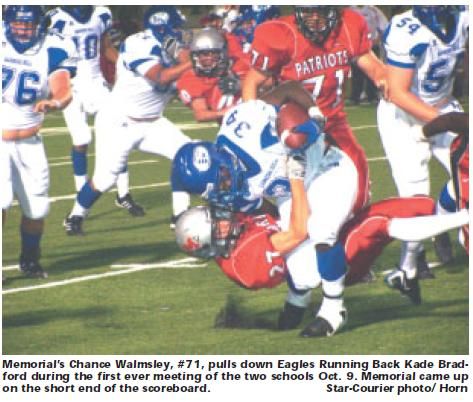 BAYTOWN/DAYTON  Last weekend was the weekend of rivalry with the Goose Creek Memorial Patriots playing their first ever game against Barbers Hill and Crosby renewing what has been a heated rivalry with Dayton.

Although the teams had no past history Patriots and Eagles fans were quick to start the new rivalry. On the visitors side, the Eagle-faithful wore shirts that read Friends Dont Let Friends Wear Red, in reference to the Memorial school colors. On the back was the school motto We Can, We Will, Were Barbers Hill.

The Patriots countered with their own short shirts which read Beat Barbers Hill on the front and on the back, You Cant, You Wont.

On the field, the Eagles racked up over 500 yards of offense in their 52-7 win over the Patriots.

Standing out for Goose Creek was De Martie Allen who rushed for a school record 237 yards. He also scored his teams lone touchdown on a 66-yard run in the first quarter.

The Crosby Cougars have had a long history with Dayton. Previously part of the same district, the UIL scheduled Dayton with the far-east Texas schools along the state border. In those two years Crosby and Dayton met in the first round of the playoffs with Dayton coming out on top both games.

Now matching up in District 17-4A, they resumed their rivalry. The Broncos got the best of the match-up this year 49-14.

The Sterling Rangers have turned their season around this year, starting the season 4-1.

However, fans will remember 2008 as the year the Rangers broke an eight-year losing streak to the Ganders with a 21-20 victory.

The margin of victory was Lees inability to convert a PAT in the second quarter.

Lee was also hampered by 111 yards in penalties and a 1 of out 9 completion rate by Quarterback Tim Jirrels.