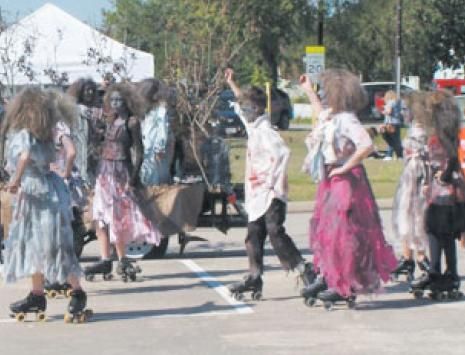 The 52nd Highlands Jamboree attracted a broad spectrum of the community to participate in the commemoration of the opening of the Highlands Bank with the Fig Orchard Jamboree. Above Princes Roller Rink brought a lively rendition of Thriller on skates to the Highlands Elementary School parking lot in front of festivities inside the school. The troop reenacted the Michael Jackson video dressed as zombies. Ceremonies began at the San Jacinto Community Center at 7:00 a.m. where 1k, 5k fun runs and a 12k bicycle race started. The Jamboree Parade brought participants from the business and church sectors. Pastor Richard Amador in traditional Ameridian dress danced a traditional Native American ceremony throughout the parade. In addition to the floats were the local fire departments and law enforcement. Many booths were located inside the Highlands school for the public to peruse the communitys many entities both business and civic organizations. Craft booths, live and silent auctions also went on inside the school while performances on stage presented a wide variety of local talent. Outside kids played on the moonwalk, played duck the clown, shot basketball and frolicked in picture perfect fall weather. St. Lukes Hospital was just shy of their goal of obtaining 25 pints of blood at the blood mobile.