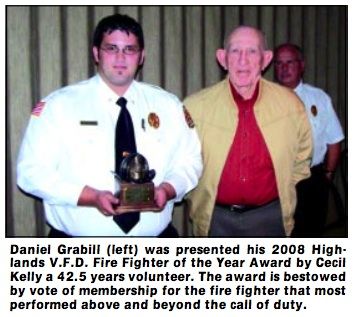 DEER PARK  The Highlands Volunteer Fire Dept. (H.V.F.D.) held their annual Installations Banquet on Jan. 17 at the Monument Inn with recognition of accomplishments and services, a review of goals and the years history, as well as naming officers and the years best awardees.

The highlight of the ceremonies was the award of 2008 Firefighter of the Year to 2009 Station 2 Captain Daniel Grabill by veteran firefighter Cecil Kelly. Although Kelly retired after 42.5 years of service in 1996, he stayed active on the Board of Directors for the next five years and still visits the station every now and again from out of town.

I am honored, it is great to have been here for the last seven years, said Grabill upon receiving the award.

H.V.F.D. has accomplished much this year with the support of the Highlands community. In addition to no at fault accidents for their apparati and ambulances their barbecue fundraiser was successful in spite of Hurricane Ike. Both maintenance costs and ambulance response times have remained low. Both fire stations never lost power during the hurricane due to new generators. The new ice machine used to store medicine and emergency provisions performed well during the storm. All fire hose and ladders passed inspection in 2008. A fire truck was refitted with a new 200 gallon water tank and pump.

EMS Chief Tracy Neathery spoke of the changing of billing companies, building certification for 15 paid medics, accomplishment of invitation of Lifeflight helicopter crews to train in Highlands and no capital expenditures as accomplishments by the ambulance crews. Goals are to achieve all aspects of a new Control Substance Security System and a battery operated stretcher for increased safety in 2009.

END_OF_DOCUMENT_TOKEN_TO_BE_REPLACED 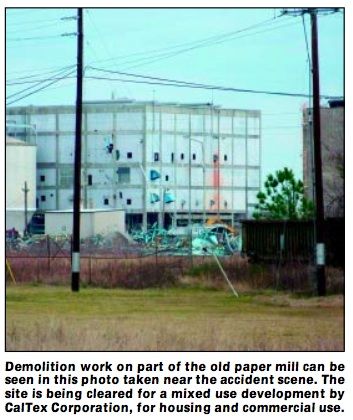 NORTH SHORE  A track hoe operator working at a demolition site in Northeast Harris County was killed Friday night in the 18500 block of Old Beaumont Highway at the Abatibi Paper Mill.

Sources say the plants construction was being altered for a new development of housing and commercial use by CalTex Corporation.

South Lake E.M.S. and Sheldon Fire Personnel repeatedly went to the location. Security guards stopped all news media at the gates that night and the next day, aided by sheriffs deputies and Pct. 3 constables. No statement has been issued for the cause of the accident.

According to HFD, the track hoe operator was working when a six story part of the building came crashing down on him. He died while working at the scene.

HFD said nine other people sustained minor injuries, but none of them was transported to the hospital.

END_OF_DOCUMENT_TOKEN_TO_BE_REPLACED

Green vows to fight for river cleanup despite subcommittee loss

EAST HARRIS COUNTY  During the last legislative session Congressman Gene Green fought to have a toxic waste pit on the San Jacinto River placed on the Environmental Protection Agencys National Priority List and be designated as a Superfund Cleanup.

As a member of the House subcommittee that oversees funds going to the EPA Green was poised to exert pressure to have the site remediated. Then politics intervened.

In a battle over the chairmanship of the House Energy Committee, Henry Waxman defeated fellow Democrat John Dingell 137-122. One of Waxmans first acts was to dissolve Greens subcommittee. The oversite that would have gone to the subcommittee will be split among other subcommittees.

Green said that he hoped Waxmans decision to dissolve the subcommittee was because Green did not have enough seniority to chair the committee and not that Green had supported Dingells election.

Despite the loss, Green remained optimistic that through his other subcommittees he will be able to help the residents who live along the river.

The site is question is located near the San Jacinto River Bridge, north of Interstate 10. The site contained dioxins and other pollutants discarded by a now-defunct paper mill. Because of the pollutants, fish and other wildlife have been contaminated. Despite posted warnings, people continue to fish and crab in the area. The dioxins have been linked to certain types of cancer.

END_OF_DOCUMENT_TOKEN_TO_BE_REPLACED

Some things change, other things dont

Several weeks ago I did a column on being upset over the Texas highways handling of the 2100 railroad overpass. Now that I am back in Crosby for a few months I am even more so. Every time I cross those railroad tracks it pains me that Highways has not only delayed the overpass construction but apparently doesnt even have it on its schedule. At least it hasnt announced any such schedule publicly that I have heard. Guess I have an objective to trying to find out more about that project during my stay.

Son David and I listened to most of the NFL playoff games this past weekend and were stunned by what we heard, or believe we heard, in the last of the four games. Early in the second half of the Steelers-Chargers game, when the outcome was still in doubt, the color announcer was talking about losses the San Diego Chargers had suffered during the season.

While I cant quote the announcer it sounded like he said, the last five games in a row the Chargers have lost this year the other team has scored more points! What? Lets do a replay on that comment. That begs the question, how does a team lose a game without the other team scoring more points?

The family took a trip to Dayton last week to have lunch at the Texas Kountry Kitchen there. We wandered into that restaurant several years ago and have made number of repeat visits. The Country Kitchen offers one of the best, and largest, $4 cheeseburgers I have found in the area.

I was driving, turned off U.S. Rt. 90 on to Main Street, and suddenly took a double-take. I thought for a few moments I had turned on the wrong street. Then I realized I was on the right street but it had changed. The buildings across the street from the Kitchen were gone and a one-story L-shaped building was in its place. We entered the restaurant, found it had enlarged and had been repainted.

Our waitress told us Hurricane Ike was the culprit. Every place we go we see more damage or repairs made necessary by Ike. Having never experienced a hurricane myself I find these results startling. One thing Ike didnt do was reduce the taste of my cheeseburger. It was a good as ever. I recommend you stop by a try one.

END_OF_DOCUMENT_TOKEN_TO_BE_REPLACED

Alone in a (chat) room full of people 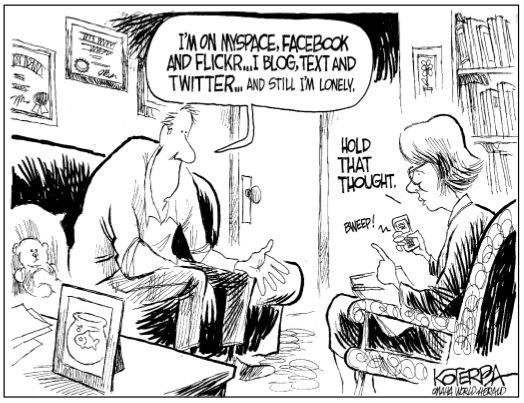