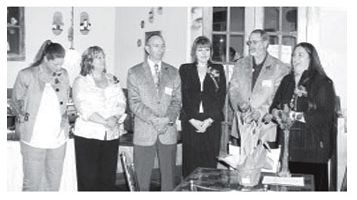 The new president of the Greater Highlands/Lynchburg Chamber broke tradition this year, and took the Chamber to an evening banquet for their installation cermony.

Stefe Cochran, of PlastiPak, had the dinner and swearing in ceremony at Lunas Mexican Restaurant in Baytown, and the event was in the evening instead of the usual luncheon.

About 100 guests, board members, officers, and community leaders gathered to hear opening remarks by Pct. 2 County Commissioner Sylvia Garcia, a recap of events by outgoing president Jessica Woods, a status report by Jim Strouhal on the Highlands Heritage Museum and Preservation Project, the swearing in ceremony by Judge Mike Parrott, and a welcome and look ahead by the new president, Stefe Cochran.

In her review of the status of
the precinct, Commissioner Garcia said that she was participating in meetings to secure part of the federal stimulus money for projects in the precinct. She had spent the day testifying to a committee that is putting together the request, she said. Other subjects that she knows the Highlands area is interested in are the 8-liners problem, and various road projects and traffic flow. She indicated that she was working with Austin legislators and agencies to bring answers to these problems. She also recently dedicated two more history murals, painted on oil storage tanks along Highway 225 in LaPorte, to further her STARS project.

Jessica Woods spoke about her accomplishments in the two years she has been president of the Chamber, saying 2008 had been a good year. In particular, the Highlands Jamboree had been quite successful, and noted the addition of a Childrens Pageant, in conjunction with Parents In Education at Hopper School, had helped. Also, the Chamber has been able to increase the hours of operation of the office, and noted that this Installation Banquet was the first one in the last ten years to be held in the evening, with full attendance.

She recounted the honor of presenting the Terry Davis award this year to Jim Brazzil. Also receiving support from the Chamber were the Boy Scouts, the Cub Scouts and the Highlands Heritage Museum, and the Partners in Education at B. P. Hopper School. She distributed letters from students as an example of this last relationship. She also mentioned that the Board was now at full strength, and that the Highlands Flag was available for sale at the office.

Jim Strouhal said that the restoration of the Highlands rail car was moving along, with new wood windows due to be installed this month. More display cases have recently been secured, the book on Interurbans with the history and photos of our rail car is now available for purchase at the Chamber office, and bricks have been ordered for the Memorial Wall in front of the office.

Judge Parrott swore in the new board and officers. These
included the following:

In his welcoming remarks, president Stefe Cochran said his goals for the coming year included an increase in membership, more community services, including the United Way, support of Partners In Education (He went so far as to be the Santa Claus at Hopper last year), more scholarships from Jamboree proceeds, and a robust 53rd annual Jamboree under the direction of 1st V. President Kristy Stallings.

END_OF_DOCUMENT_TOKEN_TO_BE_REPLACED

AUSTIN — The committee assignments have been handed out and local legislators have already begun filing bills as part of the 81st Session of the Texas Legislature.

Joe Crabb, a Crosby High graduate, is serving his eighth term in the State House. He serves as Vice-Chairman of the Rules and Regulations Committee. He also serves on the Agriculture & Livestock and Energy Resources Committees.

Crabb has authored or co-authored five bills so far this session. Two of the bills, HB 105 and HJR 19 are related to the creating of a Texas Redistricting Commission.

HB 267, which was also coauthored by Baytowns Wayne Smith, would change the law regarding the interstate sale of firearms, ammunition, reloading components and firearm accessories. Crabb is seeking to remove the restriction that only allows sales from contiguous states. Crabbs HB 794 would exempt volunteer fire departments from paying certain types of motor fuel taxes. He has also filed a bill, HB272, which would create a state board which would oversee disease control programs aimed at fighting the spread of infectious and communicable diseases including, but not limited to HIV, and Hepatitis strands A,B and C.

Smith, who represents Baytown, serves on the County Affairs and Transportation Committees. He has co-authored two bills. The first, HB 632, would require water and utility districts to maintain auxiliary generators to use in the event of a power outage. Through HB 742, Smith wants to provide property tax exemptions for disabled veterans.

Williams has served in the Texas Senate since 2003. He serves as chairman of the Administrative Committee. He is also a member of the Education, International Relations and Trade and Finance Committees. He has written 21 bills so far this session. Among the bills are school programs of the disabled, funding for county parks and a bill that would restrict the use of wireless communication devices for drivers under the age of 18.

Williams is also seeking to create a water protection pilot program for the San Jacinto River.

END_OF_DOCUMENT_TOKEN_TO_BE_REPLACED

Rep. Gene Green last week voted in support of H.R. 1, the American Recovery and Reinvestment Act (ARRA). This legislation will help Americans become more globally competitive and energy independent, modernize our infrastructure and healthcare systems, invest in the future of education, while providing unprecedented accountability and transparency. The American Recovery and Reinvestment Act was approved by a vote of 246-183, and will be sent to President Obama this week for his signature.

Today, Congress took action and passed a responsible solution that will put America on the road to recovery, said Rep. Green. We are not looking simply to provide a crutch for Americans who have lost their jobs. Our investment in the workforce is designed to not only rebuild America, but to transform our economy for long-term growth and make Americans globally competitive in growing industries like green collar jobs, new energy markets, and health care information and technologies.

The American Recovery and Reinvestment Act will create and save 3 to 4 million jobs and prepare our economy for long-term growth. This legislation focuses on the struggling economy today and on creating a sustained workforce for tomorrow. ARRA includes strong oversight and public transparency. More than three quarters of all Americans favor this legislation.

Right now Texas has an unemployment rate of 6 percent, and it is estimated that the Recovery package will create or save over 269,000 jobs in Texas alone, said Green.

A staggering 3.6 million American jobs have been lost since this recession began in December 2007. High unemployment and rising costs have outpaced Americans paychecks. The Recovery Act will help workers train and find jobs, and help struggling families make ends meet. Every dollar in unemployment or food stamp creates at least $1.63 in economic activity, as these funds are spent quickly. 95 percent of Americans will receive an immediate tax cut.

This jobs and economic recovery act contains plans to create or save 269,000 jobs in Texas over the next two years, provide a Making Work Pay tax cut of up to $800 for over 8 million workers and their families immediately, and modernize the states infrastructure and create jobs with an extra $2.8 billion dollars in funding.

We cannot afford to wait. Our economy is crumbling, workers are being laid off, people are losing their health insurance, and families are finding it harder and harder to make ends meet, said Rep. Green. This legislation will start us back on the right track by looking out for those who have been most affected, and by broadly investing in multiple sectors of our economy. It will take time to turn this economy around, but I am confident that this package will make our economy stronger.

Gene Green is the Democratic Congressman for East Harris County.

END_OF_DOCUMENT_TOKEN_TO_BE_REPLACED

Today, Congress passed the largest spending bill in our nations history  I voted NO.

This morning, before the vote, I was talking to my friend Sammy Mahan from Baytown, Texas, and I shared our conversation on the House floor today. Like most Americans, he was concerned about his business and what this is going to cost.

Sammy owns a wrecker business and has five wreckers under his service. He asked me, How are we going to pay for it? And I said, Well, we dont have the money so we are probably going to have to borrow it, maybe from the Chinese. Eventually there is going to be a tax increase.

I suspect that if most Americans read this bill and they realized how much it was going to cost them personally they would agree with Sammy. And since people I represent cant opt out, I am going to opt out for them.

Congress needs to come up with a plan that actually stimulates our economy by addressing the problems that got us here, not creating more. But in another failed attempt to save the day, Congress continued down the same path of careless and wasteful spending and voted 246 – 183 to pass this misguided spending bill loaded with pork. Congress needs to act to revive our economy, but a bill loaded with pet projects and more government programs is not the way to financial salvation. Government is not the answer  it is the problem.

Allowing Americans to keep more of their own money by providing tax cuts for everyone who pays federal income tax is the only proven method of giving the economy the shot in the arm it needs to recover. We do not need more government jobs, we need to allow our small businesses to increase their productivity and create jobs that will last. I believe that Americans know how to best spend their money, not the Washington elites.

Ted Poe is the Republican congressman for East Harris and West Liberty County.

END_OF_DOCUMENT_TOKEN_TO_BE_REPLACED 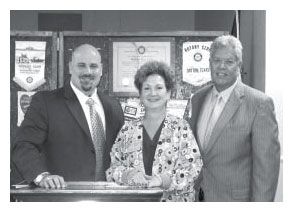 HIGHLANDS — Recovering from flood damage after Hurricane Ike, the East Houston Regional Medical Center on I-10 in Northshore has returned to almost full operation, according to CEO Jeff Holland, and is better than ever in terms of medical services and physical plant.

Holland was speaking at the weekly luncheon of the Highlands Rotary club, and explained that EHRMC has now combined with Bayshore Hospital in Pasadena, to offer more services and more specialty doctors.

East Houston is still a complete, free-standing hospital, with 131 beds, outpatient and inpatient diagnostic and surgical procedures, and a Level IV Trauma Center, the only one in East Harris County.

However, because of the merger with Bayshore Hospital, it can now offer more unique services.

Bayshore is larger, with 373 beds. Combined they have 700 doctors available. Both hospitals are a part of HCA, Hospital Corporation of America, with a total of 10 hospitals in Houston, and hundreds nationwide.

Holland said that HCA was able to reopen East Houston expeditously, because they have hospitals in Florida and are used to recovery from hurricanes. Improvements at EHRMC include digital X-Rays, a new MRI machine, a new Cardiac Catheter lab, and a new Nuclear Medicine Camera.

Building improvements include a new roof, new lift stations for sewers, and with the city of Houston, new emergency power for these pump stations.