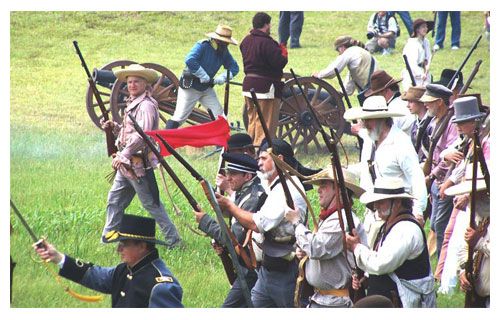 Texian troops storm the Mexican lines during a reenactment of the Battle of San Jacinto. The Battle of San Jacinto, fought on April 21, 1836, near Lynchburg, was the decisive battle of the Texas Revolution. Led by General Sam Houston, the Texas Army engaged and defeated General Antonio López de Santa Anna’s Mexican forces in a fight that lasted just eighteen minutes. Hundreds of Mexican soldiers were killed or captured, while only nine Texians died. 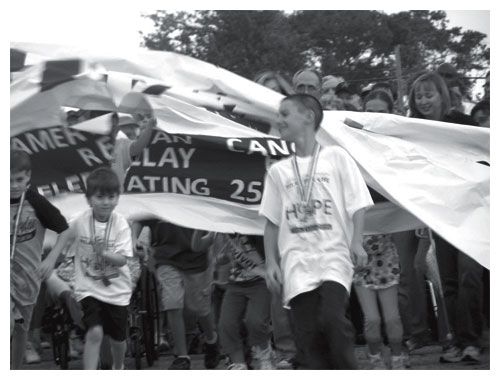 BAYTOWN — The Bay Area Relay for Life, a time to celebrate those who fought the good fight against cancer and to remember those who have lost the battle had another opponent this past weekend: the weather.

With dark clouds hovering, the Relays opening ceremony began shortly after 6 p.m. with a butterfly release and opening lap by survivors. Survivors, both young and old alike, each wearing a medal around their necks, walked the track to cheers, claps and yells of support. Within hours, however, thunderstorms came through literally raining on the parade of the thousands of walkers on the track. More than 150 teams participated this year.

As team members walked the track they cold not miss colored bags lining the track, each with a candle inside and bearing the name in honor of a cancer survivor or in memory of a person lost to cancer. More than 4,000 of the luminary were sold this year, topping the $70,000 goal the relay committee had set.

At 9 p.m. the candles were supposed to be lit. Mother Nature had other plans. Organizers decided that the weather was too bad to continue and shut down the event, rather than wait until 8 a.m. the following morning as planned. Event organizers say that this is the first time in the Bay Area Relay For Lifes 12-year history than the luminary ceremony had to be canceled.

The shortened event also hurt teams who planned to continue their fundraising throughout the event, whether it be Cedar Bayou United Methodist Churchs crawfish boil or Grace United Methodists raffle for a basket of tunes and two handmade crochet throws.

An estimated $570,000 was turned in on the day of the relay, about $200,000 short of the committees goal. However, more funds are expected to be turned in over the next week. Allison Selensky, of Grace UMC, said they continued to sell raffle tickets at the church on Sunday in order to raise more funds for the relay.

The Bay Area Relay for Life has been the top fundraising relay in Texas for the past eight years. Organizers say they will just have to wait and see if it will be nine in a row or not. The rain also caused some trouble for volunteers leaving the event site. Those who arrived early to set up their camps on Friday parked in a grassy field. The rain, however, turned the field into a mud pit that forced many cars to become stuck and left over night.

A few years back I mentioned my spoiled Old English Sheep Dog, Maggie, in this column. When in Texas we walk together around Sea Palms, Perdido, Challenger and then back on Sea Palms. We made that trip approximately 180 times (that seems a lot) from January 1 to April 4 of this year. We usually go twice daily. One of my sons remarked that is good for both of us.

Maggie is 7, and when she was about a year old our bank began putting doggie treats in the tube one gets when cashing checks, etc., at the drive-through. That has always worked well with her and she crunches away as we drive away. Recently our newspaper deliverer began putting a doggie treat with the newspaper. Maggie now loves getting the newspaper.

That gives us our first problem. Our mailbox and newspaper box hang from the same pole. Since I get a treat from one side why not the other? We go through this now every time I get the mail. Then there are turnpike and bridge tollbooths. To Maggie they look just like the booths at the bank so why no doggie treats?

Then the second problem! At our bank the drive-through lanes are on one side of the building and the parking lot is on the other. She has learned that if I turn into the bank and make a left she is going to get a treat. However, if I turn to the right, park, and go into the bank no treat will be forthcoming. She grouses a bit as we pull out.

This takes me back over ten years ago when we owned a large (145 lb.) Belgium Bouvier named Abbaye. She was big enough that she usually received a couple of treats and looked forward to them. One day the teller said, We are out of doggie treats today, sorry. I knew I was in trouble.

When the container came back and no treats came forth she got mad, barked at me, and the teller, and groused the three miles back home. I got most of the blame for that and we were not friends on the way home. She reacted the same as Maggie at tollbooths. I dont think she ever put the parking lot bit together but then she wasnt in the car nearly as much as I now haul Maggie around. I got the same reaction out of her at bridge and turnpike tollbooths.

Strange as it might seem, I have offered the same treats to the dogs as home and they sometimes turn them down. Go figure! Dont talk to me about dumb dogs.

I mentioned a column or so back that some streets in Newport are receiving new pavement. Those that were underway then seem to be finished and I dont believe any others are underway. Could be wrong as I havent been on every street in Newport.

New pavement always feels good to drive over and that is true on South Diamondhead. Nice and smooth!

The lifeblood of our all-volunteer army

The United States Army is the finest in the world. Throughout our countrys history, these brave men and women have demonstrated unparalleled patriotism, valor, and resolve. I join my fellow Texans in saluting the often unsung efforts of the American Soldier.

The Armys achievements would not be possible without the efforts of its Non-Commissioned Officers (NCO) Corps. These Soldiers — ranging in rank from Corporal to Command Sergeant Major and responsible for the nuts and bolts of daily training and operations in the Army at home and overseas — are truly the backbone of the Army. Oftentimes, commissioned officers are the public face of the Army, but NCOs work behind the scenes to get things done. Whether its the drill sergeant training new Soldiers, the squad leader caring for young Soldiers and their families, or the platoon sergeant leading a patrol in Iraq or Afghanistan, NCOs are out front, making things happen Army-wide every day.

The U.S. Army is celebrating 2009 as the Year of the Non-Commissioned Officer. Since 1775, the NCO Corps has distinguished itself as the worlds most accomplished group of military professionals. Historical and current accounts of NCO actions are exemplified by acts of courage coupled with a dedication and willingness to do whatever it takes to complete the mission. NCOs have been celebrated for decorated service throughout our nations military history  ranging from Valley Forge to Gettysburg, to charges on Omaha Beach and battles along the Ho Chi Minh Trail, to the current operations in the mountains of Afghanistan and streets of Iraq. The recent actions of Texas own Staff Sergeant Matthew Kinney, from Nacogdoches, represent the tremendous level of leadership, dedication and courage epitomized by the Armys NCOs.

Staff Sergeant Kinney had already served twice in Iraq when he was deployed to Afghanistan in 2008. Kinney, a flight medic, responded to an urgent MEDEVAC request for four casualties in the rugged Korengal Valley of Afghanistan on October 16th. Once on the ground, Staff Sergeant Kinney discovered six American casualties in a small mud hut, as well as several other Soldiers taking cover from fire.

Demonstrating strong and decisive leadership in a very difficult situation, Kinney ordered all nonwounded Soldiers to secure the outside area as he triaged the casualties and stabilized the critically wounded. As hoist operations began, the aircraft and the shelter came under heavy machine gun fire. While completing a hoist, Kinney was able to locate the direction of the fire and redirect Apache gunships to take out the enemy threat, ultimately saving the crew in their MEDEVAC aircraft as well as the Soldiers still on the ground. As Kinney continued the evacuation, he repeatedly exposed himself to enemy fire as he diligently cared for his fellow Soldiers, without regard for his own physical well-being. Then, while en route to the Forward Surgical Teams location, Kinney single-handedly treated the wounds of five critical patients.

His heroic actions that day earned him a Silver Star, our nations third highest military award for valor. He has also been awarded a Distinguished Flying Cross for a separate engagement in Afghanistan.

Staff Sergeant Kinney epitomizes the critical role played by our Armys NCOs, and he and other NCOs like him provide the gold standard for others to follow. Todays NCOs are more innovative and capable than ever; they lead by example, all while taking care of their fellow Soldiers, adapting to ever-changing environments, and taking on growing responsibilities. This year of recognition for our Army NCOs serves as an opportunity for Texans and all Americans to become better acquainted with the significant functions that NCOs carry out within our Army. They are truly a national treasure, deserving of our utmost gratitude and respect.

Please join me in celebrating the accomplishments of Staff Sergeant Kinney and these fine American patriots. I applaud the efforts of the Armys NCOs as they train and fight every day to preserve our way of life and care for the American Soldier. I also offer my sincere thanks to our Army NCO veterans who have sacrificed in defense of our freedom and who continue to represent the best of both Texas and the United States. I am humbled by your dedicated service. Well done!