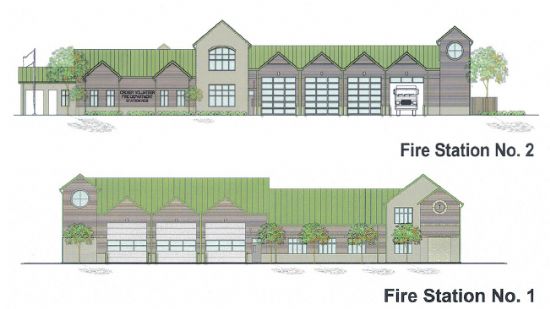 The first example of governmental architecture for Crosby that passersby on U.S. 90 will see in the future is going to be on the service road for U.S. 90 at Kennings and will be Fire Station #1. Station #1 is to be built on a 4.99 acre tract on the opposite side of U.S. 90 as Friendly Ford. It is to be of the same artful design pattern as Station #2 to take the place of the extant station in Newport. An examination of the architectural renderings at right seem to be steel structure with brick and tile features.

On June 22, HCESD#80 commissioners approved architecture plans for Fire Station #1 and Fire Station #2. Durotech, the construction manager at risk, was directed by commissioners to prepare the guaranteed maximum price for the fire stations. Durotech will be getting sealed bids for all aspects of the stations. Local contractors are wanted to contact Durotech for bidding information on the stations. Architect for the stations is Joiner Partnerships of Kingwood, they have design history in area stations and schools.

Crosby Volunteer Fire Department (CVFD) serves a 112 square mile area, roughly the same size as Crosby ISD, it began serving with minimal equipment and volunteer manpower. Now local fire fighters have outgrown their current central stations, Station #1 on Riedland Avenue and Station #2 on South Diamondhead Boulevard. Both of these extant stations were designed to be utility buildings only as are the other three CVFD fire stations that are built to lower the local ISO rating (and thereby fire risk and fire insurance bills for residents). Commissioners also are reacting to future developments in the area, projected growth plans, ISO audit, emergency plans, the impact of US 90 connecting to IH 10 and IH 610 and construction of the Overpass at the railroad tracks on FM 2100. Currently, the utility stations do not have facilities to house fire fighters overnight. Fire fighters stayed at Station #2 during Hurricane Rita and Ike but accommodations could not be described as comfortable. The buildings are said to be built for projections of the next twenty to forty years of needs for the community.

Plans show the area of Station 1 to be about 11,200 square feet about 4500 square feet of that are to be office space and living area. Living area will include two dorm rooms with four beds in each dorm room, separate womens and also  mens locker rooms with showers, kitchen and day room. The area for trucks and other fire apparatus is 60 feet by 100 feet or big enough to house up to six fire fighting trucks.

Not only will both stations be equipped with fire sprinkler systems and smoke detectors both stations will have natural gas powered standby generators.

Station #2 in Newport is to rest West of the current station on a 5.5 acre tract. The current Station 2, at 123 Diamondhead Blvd. South, will remain in service until the new Station #2 is completed. Then current Station #2 will be torn down to become a parking lot. Features of the future station are a training meeting room, offices, 3 dorm rooms, kitchen and day room. There are restrooms with showers, a fitness room and room for bunker gear washer and dryer, breathing air compactor. The apparatus bay is 80 feet by 100 feet and could house up to 8 pieces of fire fighting trucks.

According to Commissioner Randy Foster, Station #1 is more modular in scope than Station #2 (which although originally larger is limited by its property boundaries) so that if the future area of Crosby outgrows projections, additions can be made to house the new needs. The current Station #1 on Riedland Ave. will become the maintenance and garage facility for CVFD to have trucks to be fixed, serviced or upgraded.

Access for both Kennings and U.S. 90 frontage road can be made on the current plans for the future Station #1. Problems with existing Station # 1 include the facility being cramped with extant apparatus and in the future the station would be at a Teamwork rescue on FM 2100 ESD#5 Medics including Coordinator Christy Graves standing at right with backboard await Crosby Volunteer Fire Dept. Fire Fighters cutting a woman from the yellow jeep above that was struck by the white car on June 26 at about 12:15 p.m. The car was northbound and struck the side of the not yet moving jeep near the traffic light at Foley Road, according to Deputies. Lifeflight helicopters await the extrication to take the woman from the Jeep to Hermann Hospital. The woman from the white car was taken by ambulance to a hospital. projected difficult intersection to get through.

The new buildings are engineered to survive stresses of disasters like hurricanes and as much as is possible for tornadoes and have met all the standards set by Harris County.

Ball park figures for expected completion of the concurrently building stations run about a year once completion begins. A raw guess before contracts are viewed could place the cost estimate of Station #1 at about $2.8 Million and Station #2 at near $4.2 Million. More speculative projections could see the beginning of groundbreaking possibly as early as August but that will depend upon numerous factors.

Much of the reasoning behind building concurrently have to do with price and lowering bidding of contractors to do work like earthmoving, bricklaying and electric  knowing that they will be working in close proximity to an similar project, less back and forth travel.

END_OF_DOCUMENT_TOKEN_TO_BE_REPLACED 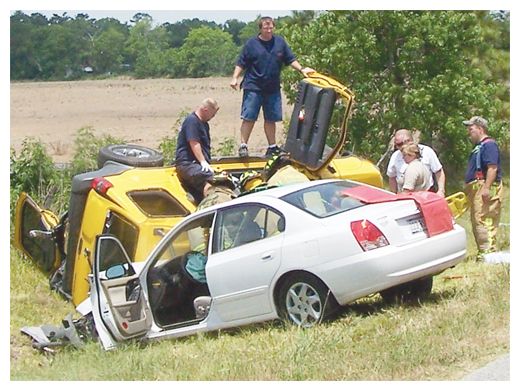 ESD#5 Medics including Coordinator Christy Graves standing at right with backboard await Crosby Volunteer Fire Dept. Fire Fighters cutting a woman from the yellow jeep above that was struck by the white car on June 26 at about 12:15 p.m. The car was northbound and struck the side of the not yet moving jeep near the traffic light at Foley Road, according to Deputies. LifeFlight helicopters await the extrication to take the woman from the Jeep to Hermann Hospital. The woman from the white car was taken by ambulance to a hospital.