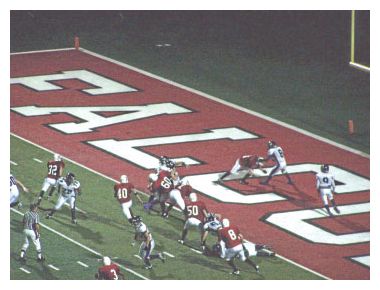 CROSBY  Coach Mac was the color of a Christmas tree bulb when he though his first game at Falcon Stadium was about to be rained out at 7:37 p.m. on August 28.

Weve waited 28 years for this game. he exclaimed in reaction to reporter questions as he marched his team back to the locker room when the opening game was delayed due to lightning.

But kickoff did happen at 9:00 p.m. and the Huffman Falcons would honor the dedication and sacrifice of the community to see that the Varsity team have a world class facility in which to play football. Although fans had to wait below the stadium seats and Press Box to keep dry, the excitement for the game never diminished. But seating had been packed to capacity before the game and just over a third of attendants stayed for the late game.

Huffman Falcons opened the game pushing the Willis Wildkats down the field to the 7 yardline but the drive faltered when a pitchout resulted in a turnover. First blood was drawn by #4 Casey Martin who dashed in 19 yards to the inside right of the Wildkats after a quick 10 yard pass from Cole DeBerry with 3 and a half minutes left in the first quarter.

Most of the big mistakes, fumbles turnovers in possession made by both teams happened in the second quarter when both teams scores seven points with less than three minutes left before the half. Joel Witwer #7 caught an amazing short pass from DeBerry. The Huffman defense had the short play but the Wildkats had the bomb, they got 7 off a 45 yard pass just before the half was over.

Desi Tchussen kicked extra points all night long and scored early in the third quarter with a 30 yard interception return. He would however fail one kick in the final three minutes of the third quarter.

Then the Falcons seemed to lose focus for scant minutes just after the turnover made points for the home team. The Wildkats were able to return a kickoff for 80 plus yards. About five play minutes later the Wildkats would score another touchdown on a wild, side to side field covering pass and dash.

It seemed the element of coaching however rallied the Falcons at 29 to 21 in the third. Joel Witwer caught a pass from DeBerry and made it count for 6.

Willis was determined to watch for Falcon flaws. When Huffman failed to complete that extra point kick by a pat block. The Wildkats Brent Walters sprinted 95 yards into the endzone as the third quarter was winding down into the last two minutes.

The amazing ability of the Falcons to shut down the short straight run must have been the seed of the Willis sideways run that more than eight times they pulled going for long yardage. A receiver would catch the ball then run a zig-zag pattern from one sideline to the other picking up extra yards when the Falcons were thrown off their game.

Four times a Huffman player however caught the runner and all that went for nothing. But in the fourth quarter the Wildkats put a fine 30 plus yard dash into the game. Willis had pulled from way back to up by one and the Falcons looked out of steam except for the steam from the Falcons defense that were heard popping pads on the line. Finally, Joel Witner landed with an all day in the air pass and sprinted it in for six. To make the show complete, Martin and DeBerry added two more.

The total yardage was about equal for both teams and possession of the ball nearly equal also. Willis scored more of the hurry up offensive because they had to against the Falcons defense. Cole DeBerry was hitting about 50% of his throws and that will improve as his receivers get better at catching the lightning. He gave Huffman about 100 yards more than Willis in passing at roughly 270 yards.

The bragging point for Huffman is that the team played clean and yet was popping on the line. Huffman had a few minor penalties but was not making the big obvious no-nos.

END_OF_DOCUMENT_TOKEN_TO_BE_REPLACED

I-10 reopens after year-long expansion

EAST HARRIS COUNTY  On Sept. 2, the Texas Department of Transportation (TxDOT) along with State Representative Wayne Smith and other supporting agencies celebrated the recent opening of IH 10 East Freeway in East Harris County near Highlands with a ribbon cutting on the road. Workers opened the east bound lanes during the evening hours of Sept. 1.

With the project complete, the I-10 Eastbound entrance ramp at Four Corners was also reopened this week. James Parnell, project manager for the work, said that the project was primarily focused on widening the lanes and installing storm sewers.

The project, which Parnell said was completed in 352 days, came in at a $20 million price tag.

The project spanned from just east of Magnolia Avenue to Spur 330 and consisted of two phases.

END_OF_DOCUMENT_TOKEN_TO_BE_REPLACED

A man was arrested in Highlands over the weekend when a neighbor recognized him as having been to the residence before to steal items from a local resident. The neighbor detained the suspect and waited for deputies to arrive.

The investigation concerns the driver of a pickup truck, described as involved in any of four other incidents.

A relatively new, dark pickup truck driven by an Hispanic, early 20s male driver is suspected in at least three home invasions, a burglary and a robbery.

Two home invasions including one of two that occurred last Thursday, August 27, had such a vehicle. Deputies stated that they believe much more investigation is needed to conclude that the two incidents were done by the same person. One occurred not long after 8:00 p.m. and the other after 11:00 p.m the same evening.

According to other deputies a 20 to 24 year old Hispanic male under six feet tall was described in four of the five incidents. In two incidents a younger dark haired female was noted as a participant and in another someone else was sitting in a dark truck.

In another apparent burglary incident, an Hispanic, slender, young woman was described as rummaging through valuables inside a Newport home by a baby-sitter that heard a noise inside the house.

Residents are advised not to open their doors to anyone unless they are certain who is waiting on the other side. Even innocent appearing, young females standing with arms akimbo outside the front door may be a cover for a male accomplice, hidden and waiting to pounce and bound through the door at a given opportunity. Locally, locking doors may not be a habit but needs to become a routine, said the deputies, to keep out those criminal elements that regularly check for opportunities to steal from easy targets.

END_OF_DOCUMENT_TOKEN_TO_BE_REPLACED 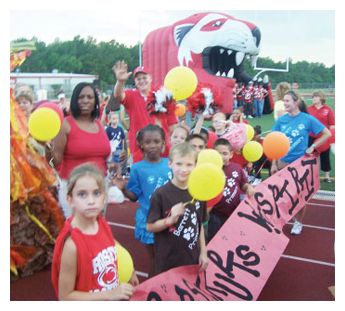 CROSBY  Local football has a large following, including the Cougars Varsity Football Team and youngsters in the Pee-Wee leagues of the Crosby Youth Football. Crosby ISD makes extra effort to get everyone involved with the game.

Two new lighted fields are at the Harris County Precinct 4 ball parks behind the Crosby Library. As training began for the tiny players much inspiration came from attendance of Heywood Jeffries, who played for the Houston Oilers for a decade.

The Crosby varsity team traveled to Waco on Saturday, following a large Pep Rally that was rained indoors just 17 minutes into the rally. Perhaps the results of Saturdays game would have been different had the rally not had to adjourn to Cougar Stadium that Friday. The Cougars played Ennis at Waco ISD Field.

High school Principal Dr. Marley Morris said, Whether it be on the football field or in the classroom Cougar Pride really is second to none!