Crash call at the doctors office? 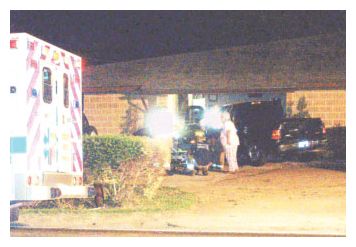 Newlywed Mary Helen Wolf and Jimmy Wolf got a call at about 3:00 a.m. Saturday that the office at which she works was crashed by a pickup truck off FM 2100 and that the entrance glass and part of the wall was smashed into making a security risk.

She was called instead of the chiropractor because Dr. Rob Rosenbaum was on a trip to Africa.


The couple went straight away to see if it could be true. It was, but according to Mary Helen there were good neighbors in abundance, too. She described the damage as substantial.

We are thankful that it didnt happen when we were open, but you know, surprisingly, it couldnt have happened at a better time, as it worked out. said Mrs. Wolf, Gods timing is better than ours.

Her husband is a senior supervisor for Tellepsen, builders of hospitals and high rises, he knows a thing or several thousand about buildings. A neighbor, Luke Morgan, owner of Millennium Builders stopped by and he went and got power tools, levels, crowbars even hauled over his trailer to put debris in to haul to his dumpster. He also called his friend, Roy Loggins of Loggins Ace Hardware in Highlands and Loggins Lumber Yard at 5:30 a.m. to get the materials to seal the gap in the front of the office.

On 09/09/09, the office reopened with minor physical modifications and a restored faith in human goodness.

It was a terrible experience but we got to find out about wonderful people who support us.

Mrs. Wolf explained, The staff all pitched in to do most of the internal clean up ourselves. The people that helped get the job done need to get the credit and we were warmed to find out about so many wonderful people who live about us.

Somebody got lucky but it was an accident.

END_OF_DOCUMENT_TOKEN_TO_BE_REPLACED

EAST HARRIS COUNTY  This week President Barack Obama held a speech directed at school-age children. In a move unique to the White House the speech was held during school hours.

Many students, however, did not get to see the address live with some districts in the area choosing not to show the address. Crosby ISD was an exception. Superintendent Mike Joseph said the address was broadcast live in campus libraries and auditoriums. Attendance was limited to those students who brought signed permission slips from home allowing them to see the speech.

Joseph said that the district has policies in place to address controversial issues and topics and when the speech was announced he followed that policy.

This is a parents right issue, he said.

The school district sent home letters to parents as well as posting the letter on their website, which advised parents of their right to stop their child from participating in any school activity they found objectionable. Copies of the address will be provided to social science and history teachers to use in their classes, he added.

The White House provided supplemental material for teachers to use in their lessons related to the speech. Crosby will not use the material, Joseph said.

Huffman ISDs Superintendent Dr. Dog Killian said that his district would not broadcast the speech live.

Since the speech was held during lunch, Killian said that he did not think teachers should be forced to readjust their schedule to fit the speech.

Goose Creek CISD is also among the districts that did not broadcast the address live.

Superintendent Dr. Toby York said that like Huffman he would not disrupt the regular class schedule to allow for live viewing.

As I have visited our campuses the past two weeks, it is apparent that students are engaged in learning that has been carefully planned by teachers and staff. I appreciate all of their efforts in utilizing our instructional time so efficiently, Toby York wrote in letter sent home to parents.

York said that principals and teachers would be provided with a copy of the broadcast for use in social studies classes in the same way they would incorporate other national event broadcasts into relevant instructional activities.

Recognizing the controversial nature of the program, York said that the district would follow its written opt-out policy. According to the policy a parent or guardian wishing to remove a student from a class or activity that conflicts with the parents religious or moral beliefs must provide a written statement authorizing the removal, York said.

In the letter to parents, they were instructed to inform the respective principals in writing by Sept. 4 if they objected to their child viewing the program.

Campuses will provide an alternative instructional setting and activity for any student not viewing the broadcast, he added.

York said that it was apparent that the President chose this particular date because it would coincide with the first day of school for many districts across the nation.

END_OF_DOCUMENT_TOKEN_TO_BE_REPLACED 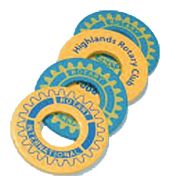 HIGHLANDS  The Highlands Rotary Club will finally get around to holding their Washer Tournament, only a year late thanks to Hurricane Ike. The tournament is scheduled for this Saturday, Sept. 12 from noon to closure, at Charlies Ice House, 906 N. Main Street in Highlands.

Last year the Highlands Rotary Club had scheduled their fall fundraiser, the competitive Washer Throwing Contest, for the week of Sept. 20. But Hurricane Ike hit on the 12th, and many things were canceled or postponed.

Rotary decided to dedicate their time and effort to disaster relief, so the Washer Tournament was skipped.

This year, all proceeds from the Tournament will be used for the work of the Rotary Foundation, which is heavily involved in international relief and charity work, Polio eradication, scholarships, and generally beneficial projects for national and international venues.

The public is invited to come and participate. In addition to two-man teams, there will be a silent auction, and food and refreshments. The tournament itself is a double elimination style, giving a team that loses one game another chance to recover and win.

The tournament is under the direction of club president Robert Woodall, but it is a project in which all the club members will partipate, both as gamers and as workers, Woodall said.

Based on previous years when the club held the tourney, it is expected that there will be 50 two-person teams, made up of local Highlands folks and Rotarians from all over the district. This is the 3rd Annual tournament, and like many activities held by the Highlands club, the reputation spreads wide throughout the sixty clubs in the greater Houston district 5890, for fun and a lively time. Rotarians thrive on fellowship, and this is one of two major fundraisers that the Highlands club holds to support their community activities. They also participate in many District and National activities.

The Highlands Rotary Club is always looking for new members, so if you are interested, be sure and attend, meet a few Rotarians and have a good time. You can even throw a few washers for a good cause!

END_OF_DOCUMENT_TOKEN_TO_BE_REPLACED

Tales from the garden

Labor Day weekend, tis. This time last year we were in preparations for Hurricane Ike to come to town. It also reminds me of the blackberry wine which was started after we lost power. The wine has been working the entire year now and its still working; might end up knocking your socks off.

The blackberry patch is No Mas (thats Spanish for No More) as it has been cut to the ground being nearly dried up. That is good soil where the blackberry patch was, been thinking of getting some thornless blackberries or maybe something else we can eat to plant in its place. Should be a rule, nothing is planted that you cannot eat.

Only have five things in and around the yard besides grass (weeds) that you cannot eat. A Confederate Rose, a Seven Sisters Rose, a Tuberose (has the fragrance of the Gods), a Red Apple Ice plant and a palm type plant that is leftover from my father-in-laws funeral, not sure what it is so it is called Don McAninch. The two rain containers under the back roof and porch contained a bit of water but not enough to amount to anything. It is used mostly to sustain the Tuberose lately.

Out on Liberty Hill Road at the little house on the hill there were three large washtubs that gathered water as it came off the side of the tool shed. The water was used to wash the clothes and all. Out from the edge of the tool shed past the water tubs was the artichoke patch.

A Jerusalem artichoke is one that you dig and not like the globe shaped artichoke one sees in the stores nowadays. The roots are knobby and Ma Pearl used to make pickles known for their sweet, nutty crispness in turmeric spiced pickles. A South of the Mason Dixon line recipe with onion and red pepper. Makes me wonder how the artichoke would do in the old blackberry patch. If the plant is ordered now, it will not be shipped until spring. Time will tell as they are ordered.

Memories of the wash day chore out in the country come back then – laborious as all get out with the ringer type washer. It was fun to put the water soaked clothes up and into the ringer only it was not so much fun when my hand went up into it. I squealed like a cut hog and my grandma came running and set me free. No longer did I think it was so much fun cause that hurt. No Mas.

END_OF_DOCUMENT_TOKEN_TO_BE_REPLACED

HUFFMAN  After putting in an outstanding performance in Hargraves Week 0 win over Willis, Joel Witwer has been named a Texas High School Football.Com Player of the Week.

Witwer shares the Southeast Texas 3A Player of the Week honor with Brian Bell of China Springs.

Witwer had six catches for 130 yards in the Falcons 37-30 win. Whitwer also scored three touchdowns including the game-winning touchdown on a 69-yard catch with 2:01 left to play.

He also dominated on the defensive side of the ball with seven tackles and two interceptions.

Witwer is currently the teams leader in rushing and receiving yards and touchdowns.