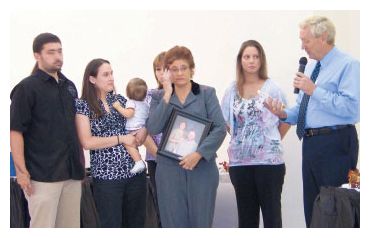 Led by president Phillip Morris, Kristy Stallings, and Jessica Woods, the Chamber made presentations to outstanding citizens for Service and Commitment in 2008 as follows:

Sheriffs Deputies ROGER SWANEY & RICHARD WAGNER, motorcycle deputies, presented by Sgt. Parker, for conscientious investigation of a hit and run fatality accident, that led to the discovery of a murderer that had committed the crime the night before; for breaking up an auto theft ring in the area; and for keeping the I-10 Freeway open after a bad accident that initially blocked several lanes and looked like it would take all day to clean up;

Business/Organization of the Year, PORTRAITS OF TEXAS, to Ramona Hanagriff for her willingness to always help the Chamber and those in need;

and the Terry Davis Award, to Alan Hanagriff posthumously, for his dedication and love of the community, his willingness to give time and effort to others, and his joy of life that he shared with his family, friends and community members.

The Terry Davis Award was accepted by Alans widow and family members, about a dozen who were in attendance.

Open House at Portraits of Texas

As part of a thank you to the community, Ramona Hanagriff and Jennifer Nolan announced that they would have an Open House for the community, on Saturday, Sept. 19th and invited everyone to come.

END_OF_DOCUMENT_TOKEN_TO_BE_REPLACED

The newly elected board of the Crosby Fair & Rodeo raised awarding scholarships from five $3,000 scholarships per year to five $5,000. The board is preparing to host their Annual Membership Feed at the Fairgrounds on Saturday, September 19 at 5:00 p.m. Membership tickets for the 2009 2010 year will be available in October. Above are the newly elected board members and officers of the Crosby Fair & Rodeo, they are: Tannie Gillespie, Russell Rogers  President, Sonny ArmstrongFirst Vice President, Bill Busby  Treasurer, Heath Matthews, Doug Hall  Chairman of the Board, Eddie Glover, Jr., Rick Larkin  2nd Vice President, Billy NashGeneral Manager, Ralph Bartholow  Secretary.

END_OF_DOCUMENT_TOKEN_TO_BE_REPLACED 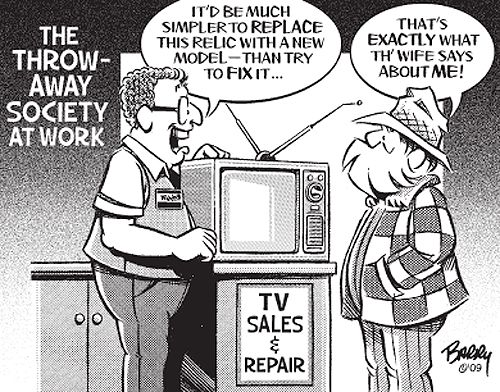 END_OF_DOCUMENT_TOKEN_TO_BE_REPLACED

As many of you know the Springers reside in West Virginia and find our way to Texas via various interstates at least three months of every year, sometimes more. We love Texas (and Crosby).

We had an interesting event here over the past six months that I want to relate to you. I call it:

Out of the mouths…

State officials were adamant about raising the tolls on the West Virginia Turnpike, which is a part of I-77 from Charleston to the Southern border with Virginia. The tolls were $1.25 for each of the three tollbooths along the 100-mile route. The proposed toll would be $2.00 each for a total of $6.00 one way. A hue and cry went up from residents who use the turnpike daily. Much ado was made of this verbal battle. They lost, the state won, and the tolls are now $2.00 times three.

A local Mother was traveling to South Carolina on the turnpike recently with her young son to visit relatives. The third tollbooth sits near the top of one of the highest mountains in the area and has a beautiful view.

As they approached that tollbooth the six-year-old offered, Mommy, West Virginia is a beautiful state isnt it? Yes, replied Mommy, pleased that her young son would take notice. As she prepared to pay her toll he commented, And you have to pay to get out and then pay to get back in.

I couldnt have said it better.

The End of an Era!

Linda and I live on a 1-acre tract on the banks of the beautiful Coal River near Charleston. Before ours, and the adjoining subdivision, were developed the land was a large apple orchard, according to a map in my possession that dates back to the early 1900s.

When we bought our property about 38 years ago it had eight or ten of the apple trees remaining. They were about the only apple trees left in the development. Over the years a windstorm took out one or two of the older trees, others died and I removed a couple due to property improvements.

After 35+ years, there remained one apple tree, much younger than the others, that we have nursed along for several years. Over the past three to five years I have had to remove several dead limbs. Earlier this year I had the entire tree cut down as it was about to die. It was the last of hundreds of apple trees that once called the subdivisions acres home. It truly was the end of an era and we miss it.

Such are the people places and things that have touched my life in my home!