The increase (from $1.04 to $1.17) is in Maintenance and Operations, the portion of the school budget that deals with salaries, instructional equipment, supplies, fixing roofs but does not deal with existing debt from bond elections or building new facilities. That last portion, the Interest and Sinking, the board voted to decrease from 30¢ to 27¢ per 100 valuation. This was enabled by the increasing property values and increasing numbers of new property owners.

At the sparsely attended Sept. 21 meeting of the Crosby ISD School Board, Marley Morris, Principal of Crosby High School, presented a 4 minute video clip that dealt with some of the new instructional equipment that is lacking for students at Crosby High. One of the primary expenses calling for the increase is $2.1 million dollars in new technology equipment and a $300,000 budgeted annually for technology upgrades.

Morris video outlined that while SAT scores at Crosby High are now averaging 1027 and over 1000 for the last 10 years, they are behind for example in number of LCD Projectors, (the new equivalent of the chalkboard of 30 years ago. The LCD is a device that can link to information and tools on the Internet and become part of the classroom instruction.)

Superintendent Mike Joseph explained the need for 15 new buses, we currently have 5 spare buses to accommodate trip requests before our regular routes are completed in the evening. With a growing enrollment, we are adding 1 to 2 new routes a year. At this rate we will not have any spare buses in 2 years. We need to allocate $300,000 per year to replace old buses, at a cost of $100,000 per bus. The tax increase would allow us to do that.

Joseph said, We currently need to add two science labs so that all of our students have the opportunity to attend a science class in a lab setting. The state now requires all students to have four years of science to graduate, which has increased our need for the additional science labs. We need to renovate the Instructional Annex to have 11 classrooms available for elementary growth  Crosby is a growing district. Our enrollment as of last Friday was 5039 students. The additional classrooms would allow for the projected growth in the elementary grades for the next 4 to 5 years.

Then there is security Joseph says, Security and safety of our students  We need to invest money in a security system at each of our elementary campuses. This system would place cameras in all front offices and outside the building. In addition, the tax increase would allow us to modify the driveway at Barrett Primary School so that we would get all of the pickup traffic on FM 1942 off the road.

The budget includes $220,590 in fire alarm and intercom systems, renovation of restrooms $220,884, and $175,000 in other new vehicles. Renovations are planned for the roofs of Crosby Middle School and the Administration building. Salaries increase 2.5% midpoint for all professional employees, $1235 for teachers and $43,051 first year salary.

END_OF_DOCUMENT_TOKEN_TO_BE_REPLACED

Beat the Heat thanks Salinas, Jones for help 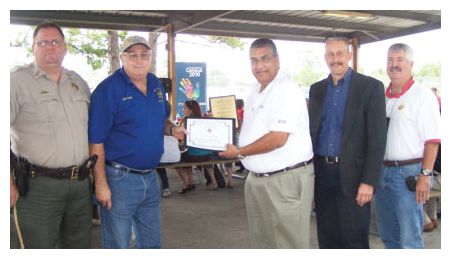 Sgt. Mike Parson and Bob Ward, long time Beat the Heat members and friends of slain Houston Police Officer Henry Canales, Sr. present Fred Salinas, owner of Friendly Ford of Crosby a plaque at the Crosby/Huffman Chamber Of Commerce Picnic in the Park September 17. Also attending the presentation were HPD auto theft members Lt. Scott Dombrowski, Officer Jim Woods and Officer Louis Garcia. Henry Canales Jr. was able to represent his father by driving his daddys racecar in his fathers namesake memorial race in Washington D.C. on Sept. 11 and 12. Salinas offered a Ford F-150 Crew Cab to pull the trailer of the racecar to Washington and back.

END_OF_DOCUMENT_TOKEN_TO_BE_REPLACED

Walkin the Walk: Goose Creek reaches out to dropouts 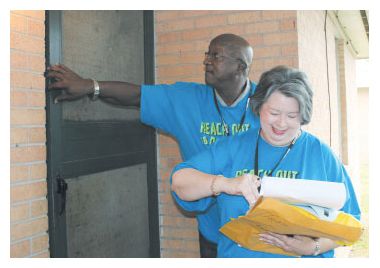 BAYTOWN  Goose Creek CISDs Reach Out to Dropouts Walk seeks to convince students who have left school to return and graduate.

This is achieved through door-to-door conversations between targeted teenagers and district and community volunteers who come with a belief that everyone deserves a second chance  the dropout and the school system.

Heres how it works: a group of volunteers headed up by San Jacinto Elementary Principal Becky Robins and San Jacinto Family Involvement Coordinator Sara Serrano knocked on a door of a home in old Baytown this past weekend.

A man answered. He was the grandfather of a ninth-grade dropout. He said that no one was home. But after a few follow-up questions, her two sisters  who attend Goose Creek schools  came out the door.

Robins asked them if their sister was home, and they answered yes. She was asleep.

After about five minutes, a sleepy-looking young lady appeared at the door. After a few questions, the young lady said she was interested in returning to school.

But the catch was, she needed a ride. Robins spoke up: How about if I pick you up on Monday morning?

The young lady agreed, and the group went on their way.

Robins said she thought about the teen all weekend. Why would she trust me? Would she be there? I was nervous, and Im sure she was nervous, Robins said.

On Monday morning, Robins arrived and the teen  with notebook in hand  was ready to go. She re-enrolled in school that day.

So far, 16 dropouts have re-enrolled because of Goose Creek Consolidated Independent School Districts second annual Reach Out to Dropouts Walk on Saturday, Sept. 12.

I am amazed by the follow up from the volunteers at our walk. We have many calling me to ask about specific students. What could they do to help? If they need to call, etc., said Walk coordinator Janci Alexander-Alfaro, Goose Creeks Director of Guidance and Counseling. It truly makes the efforts worthwhile to have the kids supported beyond the actual walk itself. It makes me proud of my community.

As it is billed, Reach Out to Dropouts Walk is a program that recovers students who have not returned to school.

Nearly 300 volunteers turned out for the Reach Out to Dropouts Walk this year. Teachers, administrators, and community volunteers went to the homes of 245 former students and made them aware of after-school programs that could help them finish their education.

Most re-enrolled students will require tutoring. Some will need flexible schedules for work and school. More than a few will need day care for their children. And others will require all of the above.

Whatever the need, Goose Creek will provide as much help as possible. Knocking on door is to evoke a sense of, we care, we are concerned, said Superintendent of Schools Dr. Toby York. Your education is important to us and we want it to be important to you too. And we also have the opportunity to get the whole family involved and have a conversation with them.

A 2007 report from Columbia Universitys Teachers College found each high school graduate provides a $127,000 net benefit in terms of reduced government spending and increased revenue. And according to the U.S. Education Department, workers with high school diplomas begin their work lives with about $10,000 more in earning power.

END_OF_DOCUMENT_TOKEN_TO_BE_REPLACED

Going to the birds…

Me and the Mrs. took a little R & R and a four day weekend down the coast to Port Aransas. We stayed on Mustang Island and spent a couple of days in Rockport, Texas attending the Hummingbird Festival.

More fun than that was the Last Chance Forever live birds of prey show that is dedicated to the rehab of sick, injured and orphaned birds of prey. Hawks, Owls, an Eagle, a Buzzard and a Falcon were on display Friday night and Saturday morning.

The birds were allowed to fly in the school auditorium Friday evening and awesome cannot describe this event. Additionally, vendors had their bird wares available from T-shirts, feeders, blown glass hummer ornaments, high dollar binoculars and scopes were available for purchase. The Mrs. noticed and purchased a 72 ounce sugar water feeder that hopefully will last more than one day without having to be refilled.

They had rain down in that part of the country a week or so ago and the skeets were out in volume. Finally found a place that has the skeets as bad as we do in the back yard. They should name it the Skeeter Festival because they outnumbered the hummers 10 to 1.

This ole Georgia Boy never has been a big fan of chowing down on fish and bait. Back in the Coast Guard in Boston on Fridays they served seafood and lobsters in abundance, back then related to a Catholic requirement of no meat on Fridays. Of course, I never had eaten the big crayfish much less any other seafood, giving mine away and opting for a bologna sandwich.

Time changes all or most anyway. Had my first taste of Mahi-mahi fish and found out just how good tis. Ate it five times and consider the grilled much better than the fried. Speaking of fried fish, the restaurants down there do not serve catfish or at least the six eating places we visited. The Mrs. put two of her shrimp on my plate reciprocating for a piece of the fish yours truly gave her. Later that evening, the shrimp were still swimming and I swear they were cooked in coon oil.

The Mrs. agreed we might move to that part of the country and it sure beats the fire out of the Smokey Mountains that she has wanted. We spent the better part of a day riding around Mustang Island, Rockport, and Fulton looking at homes for sale getting a sampling of the area. The house she wanted was $399K and mine was over a Mil so we have to wait on her to reach retirement age and maybe our ship will come in so we can buy down there.

We are back at the poor house now and it do feel good, peas and cornbread for supper, back to basics.

END_OF_DOCUMENT_TOKEN_TO_BE_REPLACED

Casey Martin goes up in the air for the catch during the Falcons game against Hamshire-Fannett Friday. Martin had seven catches for 101 yards in the Falcons 41-14 win.

Casey also scored one touchdown in the game, on a 19-yard catch in the first quarter when gave Hargrave their first points of the night less than three minutes into the contest. Hargrave Quarterback Cole Deberry completed 21 of 25 passes for 373 yards with three touchdowns and one interception.