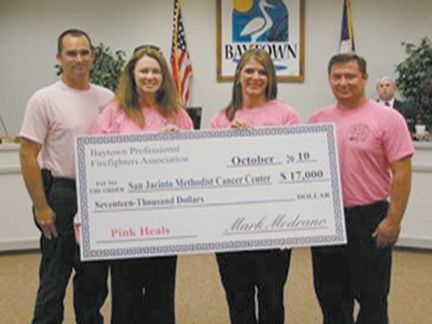 BAYTOWN On Oct. 25 the Baytown Professional Firefighters Association presented San Jacinto Methodist Hospital Cancer Center with a check in the amount of $17,000.
The funds, that will go to battling cancer locally, were recently raised through t-shirt sales and various activities at the Pink Heals Event on Oct 8.
The hospital assisted in the fundraising efforts by hosting a pink heels decorating contest and sold t-shirts as well.
In addition to the check presentation, Stephen DonCarlos, Mayor of Baytown, presented the firefighters with a proclamation. The proclamation was dedicated to the firefighters efforts to raise awareness for women fighting cancer. The firemen, along with all city employees, wore pink for three days starting Oct. 25 – 27, which was part of the Pink Out Baytown initiative. 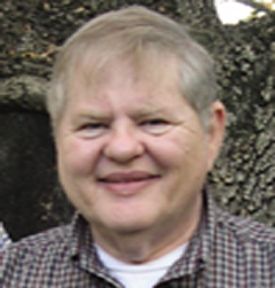 CROSBY– Jack Sheffield, who worked in the banking industry for nearly 40 years, passed away Nov. 1 at the age of 66.
Sheffield began his career at American National Bank in Beaumont. He later worked for Lone Star Bank in North Shore, which later became Sterling Bank, where he served as vice president of commercial lending.
He ended his banking career at Crosby State Bank.

James Edward Jack Sheffield, 66, beloved husband, father and grandfather, died Nov. 1. He was a resident of Mont Belvieu.
Jack was born in Beaumont July 6, 1944 to James and Louise Sheffield. Following his fathers death in 1966 his mother married L.C. Horn, who became a surrogate father to him, his brother and grandfather to his and his brothers children.
A graduate of Beaumont High School and Lamar University, Jack began his banking career in 1969 at American National Bank in Beaumont.
Over the course of his nearly 40 years in the banking business, he served at First National-Houston, Lone Star Bank and later Sterling Bank of North Shore, and Crosby State Bank.
Among his interest were his membership in the Marine Reserves, the Optimist Club, Sons of Confederate Veterans, and the National Rifle Association. Later in life he trained to be an EMT.
He was a staunch conservative and part of the TEA Party movement.
He was preceded in death by his parents and stepparents.
He is survived by his wife Linda Sheffield, daughter Michelle Pustejovsky and husband Clint and grandchildren Charles and Rebecca Pustejovsky; son Jason Sheffield and wife Summer and grandchildren Trevor Turnbough and Bryce and Hayden Sheffield; brother Robert and wife Kathy, beloved nephews Robert and James Sheffield and beloved niece Elizabeth Wenner.
Funeral services were held Nov. 3 at St. Timothys Episcopal Church in Houston. A private interment followed in Beaumont.

By LEWIS SPEARMAN
CROSBY/HUFFMAN  Tickets for traffic violations, such as speeding, are being written by Ken Jones Precinct 3 Constable Deputies along FM 2100 in response to a public outcry against the number of people killed during the last six months on the highway.
Two patrol deputies are working the traffic along FM 2100 with the specific duties of writing tickets. On November 5, the day the initiative started, some 15 tickets were written during the morning hours.
According to Captain Jack Hagee, If people want to speed they need to go somewhere else. Due to the loss of life and the loss of property we have pulled out the stops and we are starting to write tickets. This is not short term, they will be there from now on because we intend to shut the speeding down on this Highway as it has become dangerous. We have had numerous complaints to our department concerning dangerous driving patterns. According to the Commissioner, We are going to put a stop to it.
The majority of cases will find that if they are pulled over they will receive a ticket. The patrol units will be dedicated to writing tickets if they encounter someone with open warrants they will call other units to transport the suspect. The vehicles will be marked Traffic Enforcement on the back bumper of the patrol car.
The measure is in response to five fatalities that have occurred on the roadway since the end of the last May and numerous other collisions. Reasons for the accidents are numerous but mostly FM 2100 has seen an escalation in traffic beyond the capacity of two lanes to handle at excessive speed. 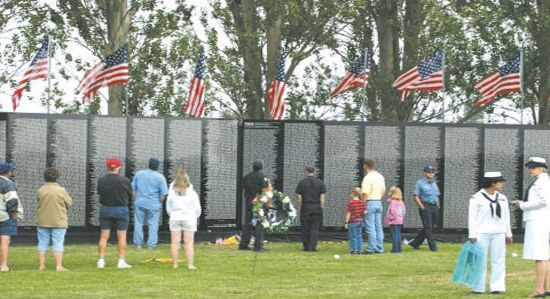 CROSBY– Plans are underway to bring the Vietnam Traveling Memorial Wall to this area next year in celebration of Veterans Day Weekend for a Thursday to Monday stay.
Participants currently include American Legion Post 658 in Crosby, Son Harvest Church, and United American Riders that list is expected to climb dramatically by next May. The Vietnam Traveling Memorial Wall is owned and operated by the Vietnam and All Veterans of Brevard, a grass roots veterans organization out of Cocoa, Florida.
It is a 3/5 scale replica of the Vietnam War Memorial in Washington, D.C. and measures 144 feet for each wing. The Wall has etched inside the names of those that gave the last full measure in the service of their country during the Vietnam Conflict inside Vietnam.

Plans are to have a motorcycle escort including groups such as Patriot Riders bring in the memorial to be erected on the grounds of the American Legion Post 658s grounds. Estimated costs to bring the Wall to this area are $6,326 and growing so the need for sponsors is tantamount.
The event will be in conjunction with the Highway of Honor and the Veterans Feast as held last Saturday. Current plans are to have the Wall arrive on Nov. 3 and be put together that night and opening ceremonies will be held on Nov. 4. The wall will receive visitors from 9:00 a.m. until 9:00 p.m. Sat. and Sunday. Closing ceremonies will be held Sunday night and Monday the Wall will be deconstructed for its trip back.The Wall hopes to attract students to spark and interest in history.
Vietnam Veterans will be at the Wall to brief students and answer questions. For information on assisting with this community project contact Lynnette Crainer by calling 281-883-8500, 281-328-6295 message phone or e-mail shc.veterans@yahoo.com.