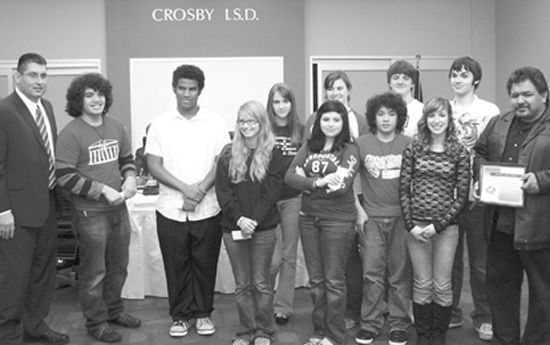 By LEWIS SPEARMAN
CROSBY  Last Monday, Nov. 15, the school board meeting started at 7:30 and ended at 10:43 p.m. officially canvassing the board election from Nov. 2. The also heard from citizens, recognized student accomplishments, decided finances, heard presentations, and reviewed approaches to academic goals.
Local school district trustee positions are the toughest unpaid jobs, that sometimes paint a target on your back and yet give opportunity to do the maximum good for your community.

The giant elephant in the room that no one is yet discussing is that the state is about to inform Crosby that it will not return back to Crosby over $1 million due to budget shortfalls, although standards are increasing and so are the number of students.
Election Results
First was the politics. Tanya Shaye Eagleton took 327 votes of 389 cast within the area for the election in Trustee Position 1. Incumbent JoAnn Crawford won with 518 to Ruben Leals 351 in Trustee Position 2. John Lindsey took all 534 votes in Trustee Position 3. Incumbent Dan Kasprzak won the at Large Position with 2,360 over Cedric Patterson, Jr. with 1,237 and Will Locke with 595. There were 13,565 registered voters and 6,253 ballots so about 46.1% voted locally.
Having accomplished the official canvassing, Gerald Blankenship was elected President of the Crosby ISD School Board Trustees. Tanya Eagleton was elected Vice President. JoAnn Crawford was elected Secretary. Leaving the Presidency, Carla Mills-Windfont was elected Assistant Secretary.
Concerns and Complaints
Next, a parent stepped forward with a complaint that his son takes home no school books or study guides. His son was disciplined for having his cell phone out and alleges that the principal looked inside his cell phone to see if he had been texting during class. The parent indicates that this is a violation of privacy. The board would later put onto the agenda to look into the matter to see if privacy had been violated. The parent indicates that the purpose of school is to teach and that I.S.F. disciplinary school did not engage students as students frequently napped when they should be studying.
Next a parent questioned the ethics of school board trustees related to a trustee speaking to her about politics as she campaigned outside the voting location, the administration building. She made accusations that he spoke to her at the school board meeting and she finally asked if there was any disciplinary action for school board members. She indicated that she was intimidated. She indicated that he had tried to argue with her again. She said that when she was leaving from campaigning yet another school board member approached her and asked if she knew that there were several raises given to several transportation employees. She indicated that she was a school bus driver.
Plaudits
Megan Sanchez was recognized for Excellence in Academic Achievement by the College Boards National Hispanic Recognition Program.
The CHS Tennis Team was recognized for their accomplishments. Coach Leuwellan was called forth to speak to the board by Athletic Director K. Flannigan. The director presented accolades for attracting capable athletes to the team. The team has only lost one match and aspires to Regional.
Jo-El Bennett was awarded recognition for Our School Needs contest for Math Tutors.
Coach Flannigan described the Leadership Presentation used to inspire the athletes to achieve goals and to lend aspiration to younger students through contact interaction with the athletes.
Dr. Robert Tatman explained his successes in obtaining grants for the school district. He has accomplished increased technology money. He is involved in the application and qualification process of numerous programs.
Patricia Kay, Assistant Superintendent of Academics made the most detailed presentation concerning new approaches to teaching. She forewarned, I could be here all night,
In money matters, the CRE8 Architectss Bevins answered questions from the board on the progress of renovations. Some $90,000 has been set aside for renovation furnishings of the Annex that is to become a grade 1 through 4 limited number student campus.
The most intra-board conflict came over the question of some board members going to San Francisco to attend School Board Teaching Conferences. In the past new techniques have been developed for application in the classroom but the expense has come into question. 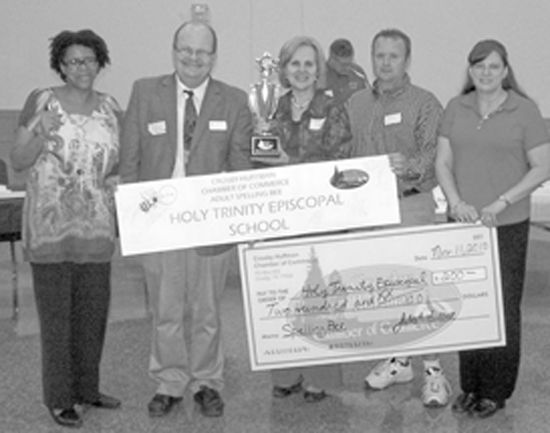 CROSBY Can you spell a word of English origin that has 34 letters and is the title of a song in the popular musical Mary Poppins? (Supercalifragilisticexpialidocious)
The Crosby-Huffman Chamber of Commerce, Crosby ISD, and Huffman ISD hosted the first ADULT Spelling Bee on Nov. 11, in the Crosby High School Commons.

Eight teams of four members each participated in this event. Teams paid an entry fee to compete in the Adult Spelling Bee and all proceeds from the event are being donated to educational programs and projects in the local school systems. The teams had 9 sponsors at $150. Final figures will be around $1,340 less awarding $350 in prizes with expenses running about $70 to $80.
Susan Armstrong donated the trophies and Crosby Office Supplies donated the pens, pads and various items for use by contestants and judges. Crosby Project Graduation group provided concessions. In addition, Boy Scout Troop #1411 was responsible for the Flag Presentation.
Of course, all who participated were winners but the group that walked out with the $200 check was Holy Trinity Episcopal School.
According to team leader Shirley Ellisor the school is preparing for two spelling bees to be performed by their students including the P.I.S.A. and the one that eventually competes at the nationals in Washington, D.C. The check will ultimately go to Help our kids in their academic achievement. 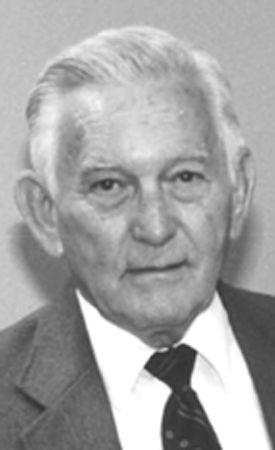 EAST HARRIS COUNTY A Harris County Constable who served for this area for close to 30 years passed away last week.
James L. Douglas, 82, of Old River-Winfree was born Jan. 15, 1928 in Quitman, TX and passed away Nov. 10, at home.
He was a U. S. Army veteran and a member of the Goose Crook Masonic Lodge #1192 and the Baytown Shrine Club.
He began his career in law enforcement in 1952 with the Texas Liquor Control Board and retired in 2000 after serving 28 years as Harris County Precinct #3 Constable.

He was preceded in death by his parents, Rabon and Eula Douglas; sister, Johnnie Bullock; and niece, Judy Jones. He is survived by his wife of 49 years, Opal Douglas and daughter, Sheryl Fisher, both of Old River-Winfree and grandsons, Cody and Dylan Fisher, both of Beach City.
Funeral services with Masonic Rites was on Nov. 13, at Navarre Funeral Home with Chaplain Kevin Taylor officiating. Burial followed at White Cemetery in Highlands.
Serving as pallbearers were Harris County Deputy Constables.
Arrangements were under the direction and personal care of Navarre Funeral Home & Cremation Services, 2444 Rollingbrook Dr., Baytown, TX, 77521 (281) 422-8111.