LIBERTY COUNTYDry weather conditions, and the threat of wildfires had prompted Liberty County to order an outdoor burn ban.
According to the order, signed Dec. 13, circumstances present in all or part of the
unincorporated area of the county created a public safety hazard that would be exacerbated by outdoor burning.
The order does not prohibit outdoor activities 1)related to public health and safety that are authorized by the Texas Natural Resources Commission for: (a)Firefighter training; (b)Public utility, natural gas pipeline, or mining operations; or (c).Planting and harvesting of agriculture crops; or 2) burns that are conducted by a prescribed burn manager.
Violation of the burn ban Order is a Class C misdemeanor, punishable by a fine not to exceed $500.
On Dec. 14, commissioners added a ban on aerial fireworks. The fireworks included in the ban skyrockets with sticks and missiles with fins said County Judge Phil Fitzgerald.
The ban is schedule to be in effect for 90 days from the order date, unless cancelled by commissioners court.

END_OF_DOCUMENT_TOKEN_TO_BE_REPLACED 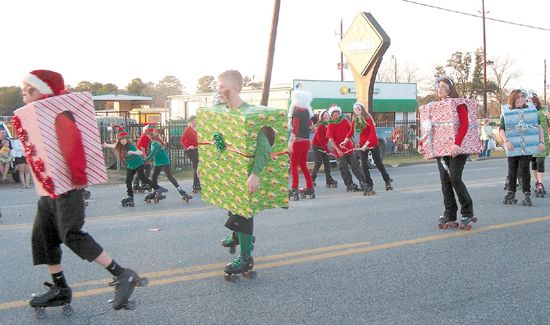 END_OF_DOCUMENT_TOKEN_TO_BE_REPLACED

By BOBBY HORN JR.
EAST HARRIS COUNTYHow efficient are school districts like Crosby, Goose Creek and Huffman spending their funds?
A new state report might just answer that question. The State Comptroller of Public Accounts has produced the first ever efficiency study of how effectively the states school districts utilize their monies.
The Financial Allocation Study for Texas (FAST) was created to examine how school districts and campuses spend their money  and how this spending translates into student achievement.
Each district and campus is assigned a FAST rating of one to five stars, indicating its success in combining cost-effective spending with the achievement of measurable student academic progress.
Five stars reflect the strongest relative progress combined with the lowest relative spending.

According to the report Crosby ISD earned three and half stars. The district, which has population of 4,793 students, has an adjusted spending of $5,969 per student. This is considered very low.
Districts earning the most stars are the ones with low or very low spending. This would indicate that the districts are able to achieve academic success while keeping costs in-check. Districts with high spending generally scored poorly on the FAST rating.
The report also shows that Crosby ISD is in the 35 percentile for combined math and reading progress.
The 20,519-student Goose Creek CISD earned three stars. Their adjusted spending of $7,076 is considered average.
The district is the 50 percentile for combined math and reading progress. Huffman ISD services 3,044 students. They earned three stars as well.
While they had a very low adjusted spending of 5,924 per pupil, their combined math and reading progress in the 14 percentile.
Academic Progress, Cost-Adjusted Spending and Spending Index measures are three-year averages through 2008-2009.
All other academic data, including accountability ratings, are from 2008-09. Through the State Comptrollers office, school districts can access advice on improving their ranking by studying financial allocation smart practice tips shared by school districts across Texas on a range of topics including instruction and staffing, financial management and technology solutions, purchasing and student services and facilities.

END_OF_DOCUMENT_TOKEN_TO_BE_REPLACED

By BOBBY HORN JR.
CROSBYA report issued by the Texas Comptrollers Office shows positive growth for the local economy.
One of the factors used to determine fiscal health and the future financial health of a community is sales tax collection. A comparison of November 2010 state sales tax collection to November 2009 collection shows Crosby far exceeding the state average of an 8.7% increase.
The Harris County Emergency Services District #5 (the EMS) has a 1% sales tax. Their November collection was $1,26,598.09.
This is a 40.04% percent increase over November 2009, when revenue collected was $90,396.87. Year to date tax sales tax collection for the ESD has been $1,515,801.81, up 17.32% from 2009 figures.
The Harris County Emergency Services District 80 (fire department) also has a 1% sales tax.

They had a similar November to ESD 5. This year, their collection for the month was $131,857.04, up 43.69 % over 2009s $91.767.16. Year to state revenue is up 13.82%from $1,301,679/14 in 2009 to $1,481,701/17 this year.
In Highlands, the ESD #14 (fire and EMS) had a November collection of $46,432.82. On April 1, 2010 a 2% sales tax went into effect for the district. Since that time, they have collected $335,589.98.
(State) sales tax revenue has now grown for eight consecutive months compared to year ago levels, with recent gains above the five percent mark, said State Comptroller Susan Combs. Novembers monthly gain showed growth in a range of sectors like manufacturing, the oil and natural gas industry, retail trade and restaurants.
The Comptroller will send cities, counties, special purpose districts and transit systems $435.8 million in December sales tax allocations, up 4.5 percent compared to last December. The final sales tax allocation of 2010 brings local sales tax revenue for the year to $5.6 billion, a fraction of a percent less than in 2009.
November state sales tax collections and December sales tax allocations to local governments represent sales that occurred in October.
The next local sales tax allocation will be made on Jan. 14.