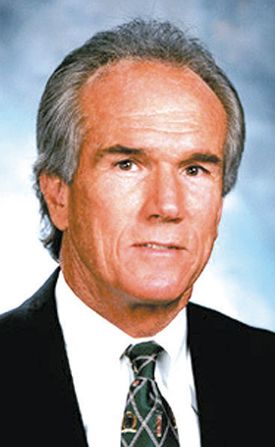 HARRIS COUNTY The U. S. Attorney for Houston, Jose Angel Moreno, on Tuesday unsealed a federal grand jury indictment against County Commissioner for Pct. 4 Jerry Eversole and another, businessman Michael Surface.
The 31 page indictment lists conspiracy, receiving a bribe, and filing false income tax statements against Eversole. It lists conspiracy and paying a bribe against Surface.
Eversole and Surface appeared in federal court on Tuesday, bound in handcuffs and shackles, a pitiful site for a powerful office holder such as Eversole. Both defendants pleaded not guilty, and were released after posting $100,000 bond each.

The charges stemmed from a corruption investigation that has been ongoing for several years, and of which Eversole was aware. He commented to several media representatives this year that he expected to be indicted.
Eversole is charged in the detailed indictment, with receiving such things as vacations, clothing, antique firearms, and financial support for his home mortgage from Surface, and in return voting to award Surface and several of his companies with lucrative county contracts. He also appointed Surface to the Sports Authority Board, and even conspired to retire in favor of Surface assuming his commissioners seat, according to the indictment.
Eversoles attorney, Rusty Hardin, stated that the two men have been friends for over 25 years, and the dealings were personal and not related to county business or favors.
Eversoles trial is set for February 22 before Judge David Hittner. The government is asking for restitution of all monies, and punishment that could be as much as 20 years in jail.

END_OF_DOCUMENT_TOKEN_TO_BE_REPLACED

MONT BELVIEUThe City of Mont Belvieu will celebrate the grand opening of its new 70-acre park and sports complex with a New Years Eve Bash.
The event will kick-off at the park on Eagle Drive at 5 p.m. with a ribbon cutting and opening ceremonies.
From 6 to 10 p.m. there will be rides for the kids and food.
Hot dogs, chips and drinks will be sold for $1. BBQ sandwiches, chips and drinks will be sold for $1.50.
Vendors will be on hand to sell kettlecorn, funnelcakes and lemonade. Volunteer groups will serve hot chocolate, coffee and cider.

Three county bands will provide the entertainment in the parks amphitheater. Leading off at 6 p.m. will be local artist Jimmy D. Smith. At 8 p.m. Django Walker, son of Texas music legend jerry Jeff Walker will take the stage.
The nights headliner, Honeybrowne will take the stage at 10 p.m. The Austin-based band recently released their latest album Indie Till We Sell Out.
A fireworks display will begin at midnight.
The new park has been four years in design and construction and features, nine lighted ballfields, three multi-purpose fields, seven playgrounds, two group pavilions, a splashpad, skatepark, amphitheater and large amenity pond.
The park was designed to serve our growing community for many years to come, Mont Belvieu Mayor Nick Dixon said. We believe everyone will be impressed with the quality design and detail to attention that went into the project.
Everyone is reminded to bring your lawn chairs to enjoy the bands in the amphitheater. Also, alcohol is prohibited in the park and coolers are prohibited for this event.

END_OF_DOCUMENT_TOKEN_TO_BE_REPLACED

HIGHLANDSEfforts to contain hazardous materials leaking into the San Jacinto River from waste pits could start in as soon as Jan. 5, says the Environmental Protection Agency.
Valmichael Leos, a project manager with the EPA Region 6 office said International Paper and McGinnes Industrial Maintenance Corporation, (the PRP or Primary Responsible Parties) have begun the site management work, which includes clearing away brush, installing a decontaminate line and setting up a trailer to serve as an on-site office adjacent to the waste pits.
Construction of the actual containment berm is scheduled to begin Jan. 5.


Status reports are available online at www.epaosc.org/SanJacWPremoval.
The berm, Leos said, would be a barrier designed to temporarily contain the contaminants until a permanent solution can be found. The EPA was successful in getting a barrier comprised of clean fill (earthen material, sand, rock and gravel) that can withstand a 100-year flood event.
Leos said that their primary goal is to stabilize the source and keep it from going into the river. He added that he suspected the PRPs reluctance has to do with the expense of the project. He estimated the cost for the containment the EPA is asking for would be in the $7 million-range. A cost the PRP would have to pay from their own pockets.
Once the construction begins, completion is expected between six and nine months depending on weather conditions.
Located in along the western bank of the San Jacinto River just north of I-10, dangerous waste contaminated with a hazardous substance commonly known as dioxin, lies partially submerged in waters from the 1960s when it was dumped there by a paper mill company.
The ingestion of dioxin is known to cause cancer, skin conditions, delay physical and neurological development and is known to have long-terms effects on the immune and reproductive systems.