Huberty sworn in as Rep. for State House District 127 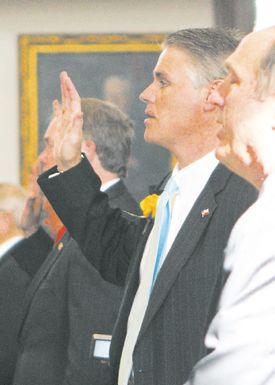 AUSTIN – On Tuesday, January 11, Dan Huberty took the oath of office to serve as State Representative for House District 127 in the 82nd Legislature.
It is an honor to be serving the people of District 127 in the Texas House. I know I have the support of the community behind me and am proud to be a voice for them, Huberty said. This session we will be tackling big issues with a projected $27 billion shortfall. Today is the first day of our 140-day long attempt to help fix those problems and I am ready to get to work.
Family, friends and supporters made their way to Austin for the exciting day.
Accompanying Dan at his desk for the swearing-in ceremony were his wife, Janet, and three children, Brianna, Ryan and Dylan. Sitting only a few feet away were his parents, Dick and Maureen Huberty; his sister Lisa Holden and his cousin, Tom Huberty.


Huberty also asked several of his Humble ISD colleagues to join him on the House floor, including Superintendent Dr. Guy Sconzo and Trustees Charles Cunningham, Dave Martin and Lynn Fields. City Council Member Mike Sullivan and his wife, Kim, and Constable Ron Hickman were also there to support Huberty.
Kingwood Tea Party leaders Jim and Robin Lennon, Daniel Ledoux, Larry Lane and Gus Faris chartered a bus to depart Kingwood early Tuesday morning. They brought more than fifty constituents to Austin to be a part of the Opening Day ceremonies to support Huberty.
Janet and I were extremely pleased to have so many of our friends and neighbors here with us on this special day. I believe everyone enjoyed the ceremony and the events of the day, Huberty said.
Huberty is replacing Representative Joe Crabb who served the community for 18 years in Austin.

END_OF_DOCUMENT_TOKEN_TO_BE_REPLACED 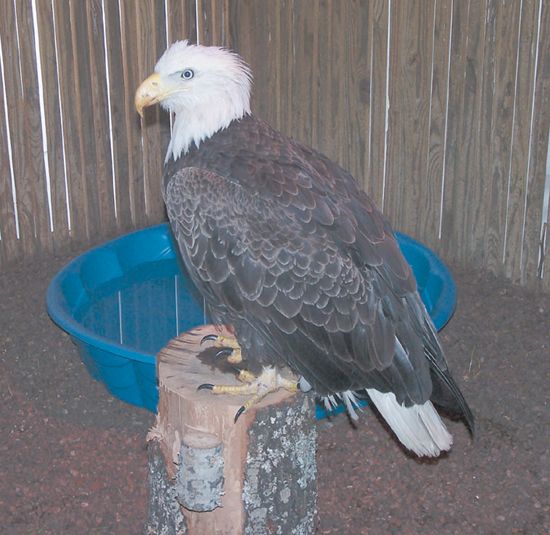 By BOBBY HORN JR.
CROSBYAn American Bald Eagle, founded injured in Crosby, now has a new home in Bellville at the Lone Star Wildlife Rescue.
On Jan. 9 game wardens with Texas Parks and Wildlife were able to capture the eagle in Crosby after it had been reported injured.
Parks and wildlife said that they were first made aware that a sick eagle was in the East Harris County area three weeks ago, but that it had been difficult to capture.
Unable to fly any true distance to a broken scapula and suffering from dehydration, the bird was found on the side of the road in Crosby.

Wardens took the bird to the Wildlife Rehab and Education Center, near the Heights area of Houston. The Wildlife Rehab and Education Center provides care for injured and orphaned wildlife.
Shirley Rogers, with Wildlife Rehab, said they were able to stabilize the birds condition and give it first aid.
On Jan. 14 the male bird, believed to be between three and four years of age, was transferred to its new home.
Rogers said the federal fish and wildlife agency has very strict rules about animal and bird rehabilitation. Since the Houston facility did not have the proper permits to continue the birds rehabilitation another site was needed.
Besides, Rogers said. They have a 100-foot flight cage. All we have is a puny 60-foot flight cage. He is going to be real happy there.
Eagles common
in area
Rogers said that eagles, even the American Bald eagle, are common to Harris and Brazoria County. They (eagles) migrate here all the time, in fact we are seeing a resurgence of them, Rogers said.
We are in a unique location in that we are on the path of two major flight ways, she added. Bird watchers come here from across the world to see them.
Rogers said that Humble and Atascocita have become popular viewing sites for both eagles and hawks, especially near water. Eagles like to fish, she said. So look for them near waterways.
Bald eagles were officially declared an endangered species in 1967 in all areas of the United States south of the 40th parallel, under a law that preceded the Endangered Species Act of 1973.
Until 1995, the bald eagle had been listed as endangered under the Endangered Species Act in 43 of the 48 lower states, and listed as threatened in Wisconsin, Minnesota, Michigan, Washington and Oregon. In July of 1995, the US Fish and Wildlife Service upgraded the status of bald eagles in the lower 48 states to threatened.
On June 28, 2007 the Interior Department took the American bald eagle off the Endangered Species List. The bald eagle will still be protected by the Migratory Bird Treaty Act and the Bald and Golden Eagle Protection Act. The Bald Eagle Protection Act prohibits the take, transport, sale, barter, trade, import and export, and possession of eagles, making it illegal for anyone to collect eagles and eagle parts, nests, or eggs without a permit. Native Americans are able to possess these emblems which are traditional in their culture.