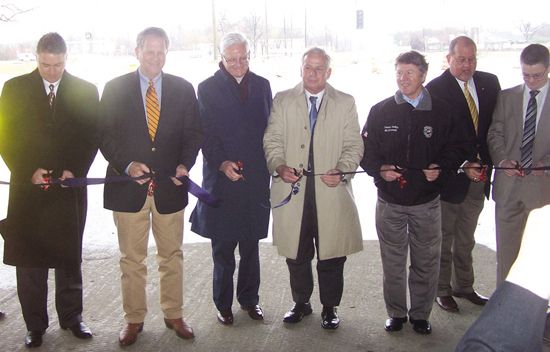 By LEWIS SPEARMAN
Federal, State and local officials joined the Texas Dept. of Transportation (TXDoT) to celebrate the opening of the newly-constructed segment of The Crosby Freeway from Beltway 8 to IH 10/610 Interchange last Monday, although the eastbound section remains under construction until later this week or early February.

Elvin Dennis, District Engineer for TXDoT in Houston, directed ceremonies and made opening statements including that the roadway was to improve access to northeast Harris County in communities between Lake Houston and Interstate 10 to areas such as Channelview, Crosby, Liberty and Dayton benefit from improved access to Houston and Loop 610 East, and I would be remiss if I didn’t point out on behalf of our attending congressional delegation’s financial contributions helped bring into existence for TXDoT these projects into fruition. TXDoT received approximately $6 million in Congressional appropriations made possible by Congressman Gene Green and some of his co-horst at that time and to help deliver this U.S. 90 construction.
The project started in September, 2006 and it was completed at a cost of $157 million. It includes approximately 7 miles of main-lane freeway paving, three direct connectors, storm sewer installation and detention ponds. The roadway will feature three main-lanes in each direction and allow for direct access to and from IH 10 East and IH 610 East Loop.
The extension of US 90 encompasses three distinct contracts with the full limits having been constructed by Williams Brothers Construction Company. The project was built without having to rebuild the IH 10 and IH 610 interchanges and it is expected to bring relief for trucking traffic along the Beaumont Highway, says a TXDoT press release.
Congressman Gene Green (D.) 29th pointed out that the state had owned the property for 30 years he first thanked Congressman Ted Poe because when Poe was elected in 2004 Poe was placed on the Transportation Committee, Ted made me a better deal than I thought I could get for all of the construction in our district we needed $4 Million more. And Ted said If you can come up with 2 I can come up with 2. Thank goodness Ted understood that so many from his district will use this everyday. It is a partnership between the State, the Federal Government and our County officials.
Green also recognized Doug Peacock attributing to Peacock his learning to how to obtain funds for highway projects. Green also pointed to the flyover in Baytown and pointed to yet another flyover hopefully in a few months at Highway 59 and Beltway 8.
Congressman Poe said, This is a good example of how we can work together in congress to do some mutual good for the entire community. I enjoyed working with Gene on this issue and money other issues as well. For some reason, I never figured it out, U.S. 90 just stopped. On the way over here we saw all the trucks exiting on 610 exiting Wallisville going through that flooded underpass trying to get on Old Highway 90 those days are going to end very soon thanks to this. Highway construction and being able to move through places like this is an economic issue.

END_OF_DOCUMENT_TOKEN_TO_BE_REPLACED

CROSBY/ HUFFMAN– Jan. 29 will be a busy day in the Crosby and Huffman communities.
The Crosby Huffman Chamber of Commerce will hold their annual Consumer Expo on Jan. 29 in the Crosby High School commons from 10 a.m. to 3:30 p.m. Admission is free.
The purpose of the event is to allow area businesses to sell their products and promote their businesses to the community. Throughout the day there will be door prizes as well as live entertainment.
There will also be a blood drive and health fair.
FFA Auction
Saturday will also see the culmination of the Huffman FFA Livestock Show.
A buyers dinner will be held from 12 to 1 p.m. on Jan. 29. The livestock auction starts at 1:30 p.m. at the Huffman FFA Arena at Hargrave High School.
Spring Ball Signups
Saturdays event will also see the final day for Crosby Sports Association Spring baseball and softball. Registration will be at the Crosby Sports Complex from 10 a.m. to 2 p.m. For those able to attend, registration will also be during the evening of Jan. 28 from 6 to 8 p.m. at the sports complex.
Rotary Chili Feast
Final preparations are also underway for the Feb. 5 Highlands Rotary Club 36th Annual Chili Feast, Raffle and Auction.
The event will be held at the St. Jude Thaddeus Catholic Church, 808 S. Main. in Highlands from 11 a.m. to 3 p.m. A live auction starts at 12:30 p.m.
Raffle tickets are $100 each. The Top prize is a 2011 Chevy Camaro or 2011 Chevy Silverado pickup. Other prizes include shotgun, camera and television. Chili dinner tickets are $7 each or free with raffle ticket.

END_OF_DOCUMENT_TOKEN_TO_BE_REPLACED

Tire recycler for old US90 has TCEQ protest hearing

By LEWIS SPEARMAN
SHELDON  A huge proposed tire recycling facility is on the Texas Commission on Environmental Quality (TCEQ) docket this week that would, if successful in hearings, be located just blocks from Crosby Municipal Utility District’s service land on the Beaumont Highway near the San Jacinto River and Lake Houston.
Implications of this case impact a variety of public conversations and issues currently ongoing, including: Should government entities be trusted to do their duty?, to Where have all the jobs gone?, to Are we going to have to live close to more pollution and mosquito nests? Liberal, conservatives and the victims of the same all have a stake in this outcome.

Genan, Inc. ( originally a German Company) obtained a decision on Oct. 28, 2010 to be issued a Tire Registration No. 6200673 for a scrap tire storage facility, the company is requesting approval or a registration to transport store and process scrap tires at a facility, at 18038 Beaumont Highway.
The stated Genan’s vision is twofold. We want all scrap tires to be recycled in the environmentally and economically most beneficial way. For us, the environment and the economy go hand in hand.
Genan’s scrap tire recycling concept is unique. In a highly technological process, developed and optimized through practical experience over more than 20 years, all kinds of scrap tires are separated into the original elements: rubber steel and textile., and The output from a Genan plant consists of 67% rubber powder and granulate, 18% steel, 14% textile and 1% waste, which primarily stems from impurities like sand and stones absorbed by the scrap tires. Genan, Inc. indicates. Currently the most important rubber modification is modification of asphalt, bitumen, infil in artificial turf and industrial usages. Steel is remelted in large steel works. … the textile … is currently going through a comprehensive product development which will lead to final products within the noise and heat insulation industry. Genan, Inc. describes their works.
Genan, Inc. had promised nearby Emergency Service Districts that the company would bring trainers from Germany to train local people to be employed to run the facility.
However Citizens for Responsible Recycling (CRR) replied for rehearing and/or motion to Overturn the Executive Director’s decision to issue the permit. They say that Pastor Charlie Tutt runs a school at 17522 Beaumont Highway within 1/2 mile of the proposed facility. The workshop teaches students employment skills and workplace behavior, with the goal of assisting students in finding employment upon completion of the program.
CRR’s attorneys questions impact on surface water drainage, rain events have created drainage problems on roadways near the facility and on the San Jacinto River about 2 blocks from the facility.
Questions are raised about water and air quality from Constituents like cadmium, asbestos and also high carbon from the steel. Air quality issues are raised stating that of his students, many suffer from asthma.
Fires are an issue of concern, the complainants say that there is no way to put out a fire involving whole tires. Water is not effective.
Impacts on home values are raised, a subdivision known as Sheldon Woods consists of 450 homes with all the issues would reduce the value of property.
Sheldon’s Fire Dept. was assured that the tires would be brought in wrapped and bundled to be stored within a facility and that facility and the robotic manufacturing area have a drop floor chamber and in the event of a fire the facility can drop a million gallons of water into the chamber smothering the fire. They were told that the single building would sit on the ten acres there and that humans never touch the tires inside the facility. The dept. was assured that tires would only be coming from the United States.
On Nov. 22, Marisa Perales, on behalf of CRR filed a motion to overturn the executive director’s approval of Genan’s application due to fatal deficiencies including insufficient information regarding the proposed site and surrounding areas, noncompliance with technical various requirements, inadequacies in the Site operating Plan and failure to provide information required.
Genan, Inc.’s attorney responded, of course, to the complaint on all issues.
The TCEQ, Les Trobman extended the time for the Commission to act on this motion until Jan. 27, 2011 to Anne Idsal, Assistant General Counsel at (512) 239-5537.
The TCEQ’s Executive Director responded via staff attorney Ron Olson on all issues raised and concluded that he had acted correctly to allow the permit.