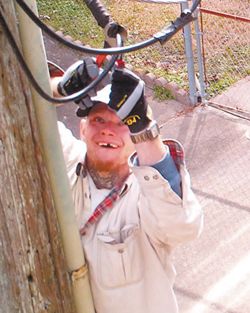 By BOBBY HORN JR.
HIGHLANDSA man wanted for stealing copper near Dayton, has been identified by authorities as Lance Leon Mears, 25, of Highlands.
Last week the Liberty County Sheriffs Office released photos of a man on a pole cutting electrical wires, allegedly attempting to steal the copper.
After the pictures were released the sheriffs office received tips leading them to a residence in the 100 block of Pin Oak in Highlands. However, Mears was not at home.
A warrant has been issued for his arrest for the Dayton theft. The sheriffs office said that Mears is also suspected of other copper thefts in Liberty and Harris County.
Mears has had other encounters with law enforcement.
On Nov. 1, 2010 the Harris County Sheriffs Office arrested Mears on a charge of driving with a suspended drivers license.