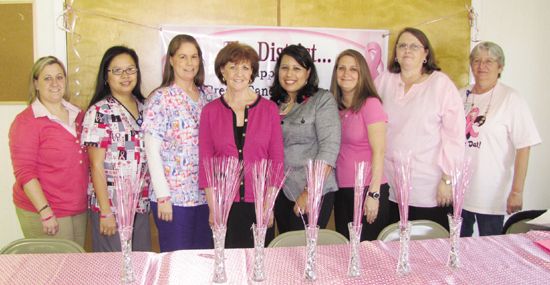 END_OF_DOCUMENT_TOKEN_TO_BE_REPLACED

LIBERTY COUNTY– A Liberty County Sheriffs Office employee has been indicted for federal violations in the Eastern District of Texas, announced U.S. Attorney John M. Bales March 2.
Naneasse Renae Fletcher, 21, of Liberty, was indicted and charged with possession of marijuana with intent to distribute and providing a prohibited object to a federal inmate. If convicted, Fletcher faces up to five years in federal prison for each charge.
The indictment alleges that on Feb. 24, 2011, Fletcher, a medical staff member at the Liberty County Sheriffs Office, was arrested for arranging to deliver marijuana and tobacco into the Liberty County Jail to a federal inmate in exchange for money.
This case is being investigated by the U.S. Marshals Service, the Liberty County Sheriffs Office and the Texas Department of Public Safety and is being prosecuted by Assistant U.S. Attorney Randall L. Fluke.
A grand jury indictment is not evidence of guilt and all defendants are presumed innocent until proven guilty beyond a reasonable doubt in a court of law.

END_OF_DOCUMENT_TOKEN_TO_BE_REPLACED

MONT BELVIEU Barbers Hill Trustees voted unanimously Monday to call for a bond election May 14, in concurrence with the election for School Board positions 3 and 4.
Board members cited an average growth rate of five percent each year during the past decade, with similar projections for future growth, as the critical factor in calling for the $75 million bond referendum.

District sees growth
We just need more classrooms, said Board President Carmena Goss. Our Middle School campus is being renovated now to handle overpopulation. But with the number of younger students continuing to enter our district, we have to prepare now in order to meet their education needs in three years, and beyond.
The call for a bond election followed a recommendation presented Monday by the community Growth Committee, which has met during the past four months to assess district needs.
For voters, bond approval would mean an average tax increase of 1.6% each year for four years. On a $153,000 home (the average home value in BHISD), that equates to approximately $23 per year, or a total of $92 in four years.
Following Growth Committee recommendations, Board members divided the bond into two propositions: Proposition One, totaling $65.2 million, addresses classroom space.
Proposition Two, totaling $9.8 million, includes classroom expansion for band, choir, theater arts and drill team to address overcrowding in auxiliary programs, an inner-campus road, and safety upgrades and other improvements to athletic facilities.

3 new campuses
Proposition One would provide three new elementary campuses.
One campus would house grades 4-5 and would be built adjacent to the current Elementary School, with the two campuses sharing facilities such as the cafeteria and library. Two additional elementary campuses would be built in the same shared-facilities design  one for grades 2-3 and the other for grades 4-5.
We want to be sensitive to the economic times while still being proactive in planning for the future, said Superintendent Dr. Greg Poole. Building campuses with shared facilities is just smart. What weve seen in our current Primary School and Kindergarten Center, which follow this format, is that the cost savings is enormous  not only in the construction phase but in day-to-day operations as well.
New Road, facilities upgrades
The Proposition Two primarily addresses the need for more space for the 150-plus member Soaring Eagle Band, choir, drill team and defending State Champion Theater Arts program.
The inner-campus road would help alleviate traffic on Eagle Drive. Athletic facility upgrades would address critical needs for safety compliance in the visitors seating at Eagle Stadium. It would additionally provide restroom facilities for the auxiliary track and field that is used daily by four campuses as well as community members.
Since its inception in 1929, Barbers Hill ISD has had twelve bond referendums and all have passed with the most recent bond election occurring in 2005.
Early voting for the bond election will be held April 27  May 10, followed by Election Day on Saturday, May 14. For more information, visit www.bhisd.net.

END_OF_DOCUMENT_TOKEN_TO_BE_REPLACED 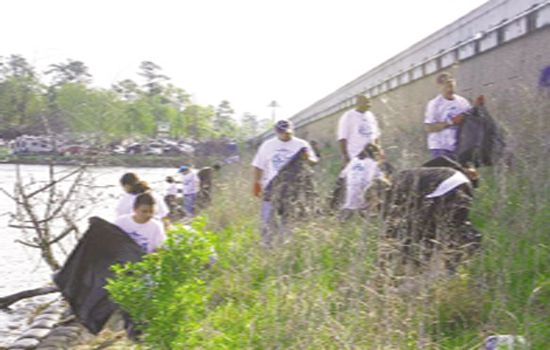 EAST HARRIS COUNTY One of the states largest waterway cleanup events is just around the corner. River, Lakes, Bays n Bayous Trash Bash is celebrating its 18th year and youre invited to join the party. More than 5,000 Texans will gather at 17 locations across the Houston-Galveston area to participate on Saturday, March 26.
Local locations include: Lake Houston Marina, 10611 FM 1960 East and Luces Bayou, 27514 Huffman New Caney Road, both in Huffman.

Registration will be from 7 to 8 a.m. From 8 to 9 a.m. collection and safety equipment will be distributed. Cleanup will be from 9 to 11 a.m. followed by lunch, entertainment and a raffle until 2 p.m.
Mobilize your family, school, church, neighbors, and organizations to remove tons of trash and debris from your community – the Galveston Bay watershed. Participating in this half-day cleanup event is easy. Just visit www.trashbash.org and choose your site.
Download your registration/liability forms and bring them to your chosen Trash Bash location or fill out a form onsite. Groups of six or more are encouraged to contact their site coordinator for special instructions that will ease registration.
Every site will provide volunteers with gloves, trash bags, t-shirts, lunch, door prizes, and educational activities. A commemorative patch is available for scouts and patch collectors.
For more information visit www.trashbash.org

END_OF_DOCUMENT_TOKEN_TO_BE_REPLACED

By BOBBY HORN JR.
HIGHLANDSThe Highlands-Lynchburg Chamber of Commerce is expected to take up the issue of gambling during this weeks membership luncheon, planned for March 10.
The gambling discussed is not local game rooms, but rather slot machines. Recently Craig Bean, representing a group called Win For Texas contacted the chamber of commerce.
The group is advocating for the implementation of slot machines at existing racetracks and Native American reservations in Texas. Bean has asked the Highlands-Lynchburg Chamber to pass a resolution in support of slots at tracks.
Bean said that there is legislation working its way through Austin that would create a Constitutional Amendment proposition. Voters would then have their voice in the matter.

All that we are asking is for our lawmakers to let the people of Texas decide whether or not they want slot machines at racetracks, Bean wrote in e-mail to the chamber.
Chamber President and Restoration House Church Pastor the Rev. Dr. Phillip Morris said they would put the issue to membership.
During the meeting, he said that he would ask membership whether or not they wanted to take a position on this matter, and if so does the chamber support or oppose the legislation.
I believe that we should have at least 75% of our members in either position to proceed with this as a body, less than this will not be sufficient to present as a unified commitment representing our body of members as a whole, Morris wrote in an e-mail to chamber members.
Bean said that other chambers of commerce are supporting them. specifically Cy-Fair, Corpus Christi, Tomball and San Antonio.
If Highlands were to take action on this issue, they would be the first chamber of commerce in the area to do so.
Representatives from the Crosby-Huffman, Baytown, West Chambers County and Dayton Chamber of Commerce have each said that they have not been contacted by Win for Texas seeking their support.
School rezoning an issue
During the luncheon, which will be held at the San Jacinto Community Center at 12 p.m., Goose Creek CISD Superintendent Dr. Toby York will be the guest speaker.
Earlier this week the school district held a public meeting to discuss attendance zones and rezoning, and how the district was going to respond to increased student population. Recommendations for new elementary and secondary school boundary lines were also presented.
According to the district, over the next five years they expect to add an estimated 1,700 students.
The school district adds that eight of its 13 elementary campuses and three of five junior high campuses are over capacity. Goose Creek Memorial High is also listed at 104% capacity.

END_OF_DOCUMENT_TOKEN_TO_BE_REPLACED 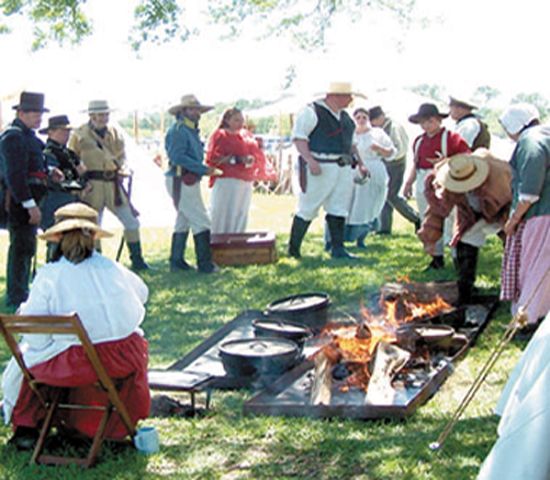 By LEWIS SPEARMAN
TEXAS  The past week has been one of great remembrances from 1836 here and the saying that The past is always with us. has never been more obvious or held more cause for excitement.
March 2 was the day for remembering the Texas Declaration of Independence.

Last Sunday, March 6 at 6:00 a.m. was the 175th Anniversary (with reenactment) of the last Assault by the Mexican Army on the Alamo, last of the 13 Days of Glory. Reuters News said that day Mexican Troops won the battle but Mexican-Americans are winning the demographic battle. Indicating authorities say Texas will soon be a Hispanic majority state.
This April 16, the Texas Army will reenact the Battle of San Jacinto, where Sam Houstons Army defeated El Presidente Antonio Lopez de Santa Annas force of more than twice their number. The Texians at San Jacinto were remembering the Alamo and Goliad but have been critiqued for being harsh to would be captives after this battle that occurred April 21.
This spectacle is entertaining and educational for the entire family. Kids can drill with the Texas Army, learn what it was really like back in 1836, watch the militia form lines of attack, watch cavalry and feel the shock wave from and hear real cannon.
Reenactors sometimes personally express disapproval to observers of Santa Anna revoking Mexican Constitution, dissolving congress, forbidding firearms to settlers and forming a centralized dictatorship backed by a well trained Mexican Army.
The new Texas Army was reformed on April 21, 1969 to honor its predecessor and 2 months later Governor Preston Smith reactivated it for ceremonial purposes. It fields to events throughout the state.