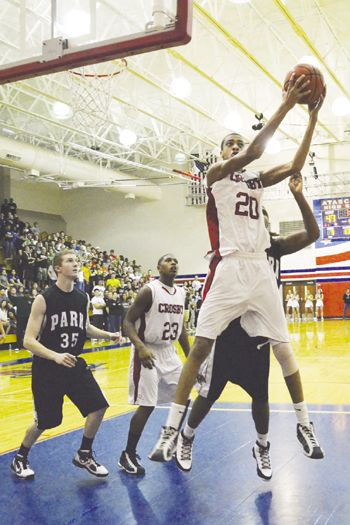 By BOBBY HORN JR.
CROSBY– Postseason honors continue to come in for the Bi-District Champion Crosby Cougars basketball team.
Senior Keynan Willis has been named the District 19-4s Most Valuable Player.
Teammate TJ Stewart (a sophomore) was voted the districts Newcomer of the Year and Head Coach Edwin Egans was named Coach of the Year.
Willis led the 24-12 Cougars with 18.1 points per game, and an Area Playoff Appearance. He also scored 434 points this season. Stewart averaged 11.1 points per game.
Joining Stewart on First Team All District was Tenarius Mills.
Kevin Bass, Keldrick Williams, Paul Singleton and LaChad Chatmon were named All District Honorable Mention.
Crosby and C.E. King led the All-District Selections with nine players each. 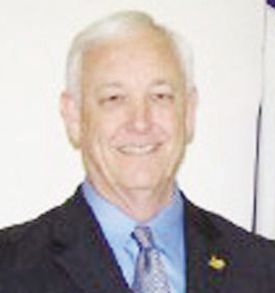 By GILBERT HOFFMAN Star-Courier
HIGHLANDS Like the football coach that he used to be, Goose Creek school superintendent Toby York was an outspoken booster for his team, the teachers and students of Goose Creek CISD, at his talk last Thursday for the Highlands-Lynchburg Chamber.
York has headed the district of 21,000 students for several years, and points to achievements of the students and individual campuses.
However, he cautions that all school districts this year are faced with cuts in their budgets, due to the state and national financial situation, and some programs and personnel may have to be cut from current curriculum.

Although final budget figures will not be known until the state sets their reimbursement amounts in July or August, now York is expecting quite a budget reduction. The state comptroller has indicated an income shortfall of $15 billion, a growing need for another $12 billion due to population growth, for a total shortfall in state funds of as much as $27 billion. Of this amount, he expects a reduction in education funding of as much as $9 billion.
The Goose Creek CISD budget is currently about $169 million, but may fall to as low as $139 million to match income from local and state sources.
The state has several options to help, including using a Rainy Day fund which has $9.4 billion available, delaying payments to districts for several months, or hopefully realigning income projects to increased revenue.
York hopes he will not have to fire any teachers or employees, but use retirements and non-hiring to reduce the staff. He stated that the budget has been trimmed where possible to date. Other options include increasing class size, or even going to a 4 day school week. Class sizes in K-4 are now mandated by the state at a student/teacher ratio of 22/1. Most 5 through 11 classes try to stay at 25/1, and 12 grade at 30/1. However, some of these might be increased.
There are 3000 employees and 1500 teachers in the district, York said. They have helped achieve a Recognized rating for the district from the state, and in fact there are 9 Exemplary campuses.
Yorks approach to his job is to build relatioonships with his students. He wants to know them, and be able to see how successful they will be in 10 or 20 years from now. They are currently testing well on state TAKS tests, he said.
The ethnicity of GC CISD is white 27%, African-American 17%, and Hispanic 56%. Economically disadvantaged children make up 65% of the student population.
One advantage the Goose Creek district has is a robust tax base. Due to the petrochemical industries, the area is 83rd in the state out of about 1000 districts.
Because of the importance of maintaining state funding for the district, York asked citizens to talk with their state representatives and senators, and asked that education funding not be cut. He said that Goose Creek CISD covers 6 state senators and 6 state representatives in its service area.
York thanked past school board member Weston Cotten for vigorously representing the Highlands area on the board and helping bring new schools and teaching programs to Highlands.
Jessica Woods spoke about the Goose Creek Education Foundation, the need for financial aid for this group that supports special projects for students in the classrooms, including field trips, drug awareness progams, and science projects that they otherwise would not be able to afford. 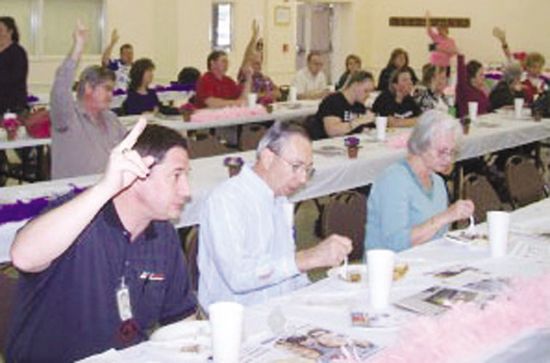