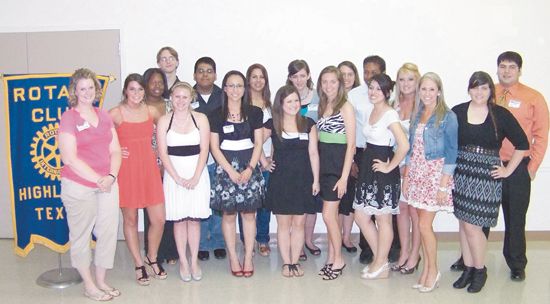 HIGHLANDS The Rotary Club held their annual scholarship banquet last Monday night at the Community Center, and awarded 18 scholarships totalling $30,000 to students from Highlands, Crosby, and Chinquapin.
Scholarships are funded by Rotary activities during the year, primarily the Chili Feast and Raffle held in February.
The event was hosted by club president Michelle Lomazoff, and the keynote speaker was the director of Chinquapin School, Dr. Ray Griffin. Chairman of the Scholarship event was Dr. Larry White, assisted by ten Rotarians on the review committee.

In his remarks, Dr. Griffin congratulated the students on their accomplishments to date, and pointed out that colleges and universities are the pathway to success in this information age.
Griffin thanked the Rotary club for their scholarship efforts, noting that many students do not finish college due to financial problems. He reviewed the history of Chinquapin, noting that over 80% of his graduates do complete college. Chinquapin was founded in 1969 as a private school for low income urban students. He said that students succeed through hard work, and having a personal relationship with a great teacher.
Dr. White said that Rotary wants to invest in people in the community with these scholarships. There were 42 applicants, and 18 scholarships were awarded. This included 3 named scholarships at $2500, and 15 at $1500. He commented that all the applicants were outstanding, and it was a difficult job to choose only these 18.
The named scholarships were as follows:
J.E. Bird Scholarship, presented by Weston Cotten, to Cesar Larraga of Chinquapin;
Pat McPhee Scholarship, presented by Barbara McPhee to Sarah McKeon of Crosby High School;
Dr. W. L. Doc Herndon Scholarship, presented by his daughter Patricia Herndon Scott, to Jaime Blair of Goose Creek Memorial High School.
In addition, scholarships were presented to Goose Creek Memorial students Keely Bertsch, Crystal Chavez, Lauren Deluca, Alexander Galvan, Alexander Hunt, and Allison Little;
Also, from Crosby High School, to Rosemary Leal, Reuben Vega, and Darrian Ellison;
And to Marissa Garcia from Chinquapin, Dianna Muldrow who was home schooled;
And to the following students currently in Universities: Amy Brewer, Merlanie Muldrow, Casey Parson, and Katie Stephens.
In presenting the Bird scholarship, Weston Cotten noted that the recipient Cesar Larraga was class president, also president of the Rotary Interact Club, and an outstanding student.
In presenting the McPhee Scholarship, Barbara McPhee noted that her husband Pat had a heart for giving and thought it was appropriate to continue this with the award to Sarah McKeon.
Patricia Scott said that her father, Doc Herndon, had wanted the Rotary Club to be a big little club as it is now known city-wide, and he and Chester Stasney came up with the idea of an auto raffle, which has allowed the club to make generous contributions to the community over the years. She said that Doc Herndon lived for Service Above Self the club motto.
President Elect Denise Smith made a point of thanking the Banquet and Scholarship sponsors:
Platinum: Sterling-White Funeral Home & Cemetery, J & L Plastics;
Gold: Dane Listi, Texana Waste Services, Mega Sand;
Silver: State Farm Jeremy Rosenkranz, Robert Woodall Enterprises, Judge Mike Parrott & Constable Ken Jones, Tutor Security, CommunityBank of Texas, Griffin Truck & Equipment;
Bronze: Capital Bank, Hollico, Iris Inspection Services, Woodforest National Bank, Boaz Export Crating, United Community Credit Union, Southern Truck Sales, Safeway Signs.

END_OF_DOCUMENT_TOKEN_TO_BE_REPLACED 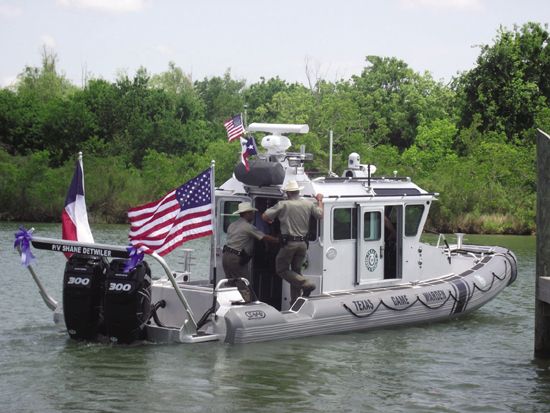 By BOBBY HORN JR.
OAK ISLANDHonored as a local hero, a state hero and a national hero, Chamber County Sheriffs Deputy Shane Detwiler was memorialized in a ceremony which marked the maiden voyage of the Texas Parks and Wildlifes newest vessel on May 7. The ceremony was held at Oak Islands Job Beason Park.
The states 29 patrol vessel was commissioned as the PV Shane Detwiler in honor of the former game warden, and deputy. Texas Parks and Wildlife Colonel Peter Flores said that the PV Shane Detwiler has been assigned to Region 4 District 4, with the hailing port in Anahuac.
The vessel will be the corner stone in our enforcement efforts, he said.
With his voice cracking at times, Chambers County Sheriff Joe LaRive told the audience how Detwiler served his nation, first as a members of the U.S. Army and then later as member of the National Guard. While serving in the National Guard, Detwiler participated in a year-long tour in Afghanistan, earning a Bronze Star for valor and a Global War on Terrorism Service Medal.
After his first tour in the Army, the Texas native returned home. He joined Parks and Wildlife, serving as an s a Game Warden in Anahuac, the same district where the vessel that bears his name will patrol. Then, he joined the Chambers County Sheriffs Office.
July 31, 2009 will be a day that will live on in the memory of friends, relatives and fellow officers. That was the day that, while responding to a shot fired call at a trailer park in West Chambers County Detwiler was fatally shot by a suspect.
Flores said that it was the tradition of Parks and Wildlife to name patrol vessels after game wardens who had fallen in the line of duty and he was honored and humbled to add the PV Shane Detwiler to the fleet.
During the ceremony Detwilers wife Trish, sons Aiden and Audie and daughter Abigail were presented with a plaque from the boats manufacturer recognizing the day, a life saver ring bearing the name
PV Shane Detwiler and commemorative life vests.
Following the official ribbon cutting, the family joined game wardens and deputies aboard the vessel as received First Orders and officially left the dock as a new member of the fleet.

END_OF_DOCUMENT_TOKEN_TO_BE_REPLACED

DAYTONThe Liberty County Sheriffs Office has made it easier for citizens to get in contact with a deputy as well as helping deputies become more efficient.
Last week Sheriff Henry Patterson announced the opening of an office in the Liberty County Courthouse Annex in Dayton on F.M. 1960.
The Sheriffs is equipped with a desk, telephone, computer and printer which will allow Deputies assigned to the Dayton area to remain in the Dayton area for longer periods of time, Patterson said.
The office will not be staffed 24-hour hours a day, but with the equipment there it would eliminate the need to go to Cleveland or Liberty to file reports, make phone calls or access department records.
He added that they expect the office to help reduce extended response times to emergency calls in the Dayton area as Deputies can respond from the Dayton Annex in lieu of having to respond from the main station in Liberty.

END_OF_DOCUMENT_TOKEN_TO_BE_REPLACED

By BOBBY HORN JR.
HIGHLANDSRecent tragedies in Highlands underscore the importance of making wise decisions.
On May 9 a 17-year old Houston boy, who had reportedly skipped school to go to the San Jacinto River with friends, drown.
According to the Harris County Sheriffs Office Fabian Salgado, a senior at Milby High School in Houston, was swimming in the river near the Banana Bend Beach around 12 p.m. when the undercurrent pulled him below the surface.
Witnesses say that Salgado and another boy were swimming when they began to call for help. Friends were able to get to the other boy but were unable to locate Salgado. Dive teams located the body three hours later, about 80 from the shore.

Investigators believe that Salgado became tired, underestimating how far the bank was to him and was unable to fight the strong currents. Alcohol is not believed to have been a factor.
Divers say that extreme caution must be taken with the river, noting dangers not only from the currents but also debris, both natural and made-made, that can trap a swimmer.
There were seven drownings in this area of the river last year.
A double tragedy
For the Salgado family, the tragedy was doubly worse. Eleven years ago Fabians older brother Felipe, then 14-years old, drown in the river a few miles north of Banana Bend.
On May 25, 2000 at 6:53 p.m. deputies were called to the abandoned sandpits in the river, near the Highway 90 bridge.
Witnesses told authorities that Felipe was swimming with a group of friends, when they decided to leave the river. He stayed behind. Shortly thereafter a shout of a man is drowning was heard. Before his friends could get to him Felipe slipped under the water and did not come up. Marine units recovered the body about a half-hour later.
Go-cart crash injures 2
On April 30 two girls were seriously injured in a go-cart accident in Highlands.
Fire Chief Harvey Little said the girls, who are in the eighth grade at Barbers Hill Middle School, were driving the go-cart in a residential section of the town. The girls were on Poinsettia when they drove through a stop sign and were struck by a car driving on Thorn.
The girls were taken by ambulance to Memorial-Hermann Hospital. One of the girls suffered a head injury and the other a broken pelvis. Both are reported to be recovering in the intensive care unit. Harvey said they initially put a call into LifeFlight. They told us the ETA (estimated time of arrival) was 18 minutes. We could not sit around for 18 minutes waiting for them to show up so we went by ground transport, he said.
Harvey said that he was seen too many children on go-carts and scooters go through intersections without stopping and that they should be reminded that the streets can be a dangerous place to play.