AUSTIN  Gov. Rick Perry has reappointed Douglas Walker of Beach City to the Coastal Water Authority Board of Directors for terms to expire April 1, 2013.
The board oversees the authoritys provision of untreated surface water to the cities of Houston, Baytown and Deer Park.
Walker is retired director of the ExxonMobil Chemical Companys Singapore Chemical Manufacturing Plant.
He is treasurer and past chair of the Lee College Foundation Board of Directors and chair of the Bay Area Rehabilitation Center Board of Directors.
He is also past president of the Rotary Club of Baytown, past assistant governor of Rotary District 5890, a past member of the American Institute of Chemical Engineers and past board member of the Baytown Chamber of Commerce and Baytown YMCA.
Walker received a bachelors degree from Bucknell University and a masters degree in chemical engineering from Cornell University.
Also reaapointed was Zebulun Nash of Houston.

END_OF_DOCUMENT_TOKEN_TO_BE_REPLACED

CHAMBERS COUNTY It is now time to Pay It Forward.
Chambers County is raising funds to help the victims of the recent deadly tornados that ravaged Mississippi, Alabama and Illinois. County Officials have talked with Officials in Monroe County Mississippi where in the small town of Smithville almost every building was destroyed and 19 people lost their lives.
The county asks that you donate to this worthy cause. Funds will be given to Community Bank For Smithville Relief Fund to help Monroe County, Mississippi.
The county has set a goal of Paying It Forward of $33,000; Doubling It Forward of $66,000 or Tripling It Forward of $99,000 by August 1, 2011.
On September 13, 2008 Hurricane Ike cut a path of destruction through Chambers County.
In the aftermath of the worst disaster ever seen in our community we felt the kindness and selfless acts of individuals, organizations and corporations from across the United States.
Chambers County employees thank Jackson County, Ms. for their $33,000 contribution. Jackson County, Ms. had received help from Jackson County, Mn. in the aftermath of Hurricane Katrina and had chosen to Pay It Forward to Chambers County.
For more information contact: Chambers County Judge Sylvias Office at 409/267-2440 or mail to: Chambers County Long Term Recovery Organization ~ P. O. Box 410 – Hankamer, TX 77560.
Make donations payable to: Monroe County, MS Relief Fund
Donations may also be made at East Chambers County Bank, Anahuac National Bank or Barbers Hill Bank.

END_OF_DOCUMENT_TOKEN_TO_BE_REPLACED

MONT BELVIEU Barbers Hill ISD voters on Saturday overwhelmingly approved a $75 million bond referendum consisting of two propositions  one for $65.2 million and the second for $9.8 million.
Proposition One which will pay for three elementary school buildings and their furnishings, passed with a 79% approval rate, while Proposition Two which will pay for an internal campus road, classroom additions for various fine arts programs and improvements to athletic facilities, was approved by 78% of the voters.
There were 1,109 total votes cast in the May 14th election.
After the successful election, Superintendent Greg Poole said, This election and the margin of the support speaks volumes about our community and its willingness to support public education. Small wonder Barbers Hill has been the leader it has for the past 80 years and this election result will allow us to continue a tradition of excellence.
Proposition 1 received 871
Yes votes, with 675 coming in early voting. There were 234 No votes cast.
The school district won the issue in all three polling locations: Mont Belvieu, Cove and Beach City.
Proposition 2 received 853 Yes votes and 244 No votes.

END_OF_DOCUMENT_TOKEN_TO_BE_REPLACED 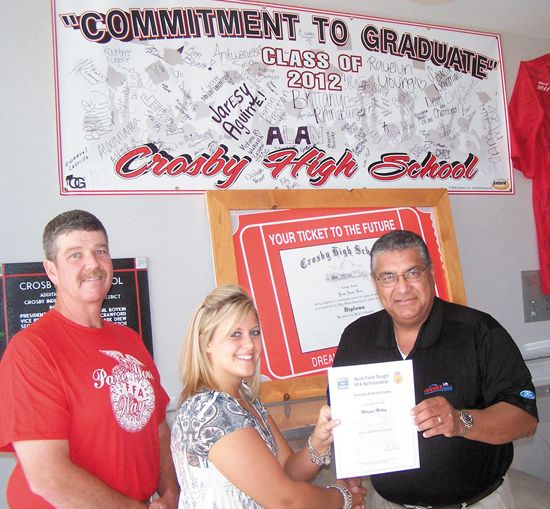 CROSBYA local senior recently won the Built Ford Tough- FFA Scholarship Program by Friendly Ford of Crosby.
Morgan Motley says she was recruited by Tiffany Rooks to attend St. Phillips College in San Antonio, Texas and major in Agriculture Education. She plans to present a steer, pig, goat and a showbox for Agricultureal Mechanics at the Crosby Fair and Rodeo Livestock Auction to occur on June 8.
Motleys parents are James and Wendy Motley of Crosby.
The Built Ford Tough- FFA Scholarship Program is designed to recognize FFA members talents and accomplish-ments while encouraging their future academic achievements.
According to Dale Chennault, Crosbys F.F.A. advisor, Motley has been in F.F.A. all 4 years at Crosby High participating in F.F.A. projects.
The scholarship is one of 526 scholarships awarded by ford Division, Ford Motor Company and Ford Dealers to FFA members who are high school seniors planning to attend college in the fall of 2011, or current collegiate students. The program is part of Fords overall commitment to the National FFA Foundation.
Additionally, five National $1,000 BFT-FFA Scholarships are being awarded on behalf of Ford Trucks as a special project of the National FFA Foundation.
Ford has supported the National FFA Foundation since the first F-Series truck was introduced in 1948 and has sponsored the Built Ford Tough collegisate scholarship program since 1997. To date, the program has awarded $6,586,000 in scholarships to 6,586 Ffa members throughout the country.

END_OF_DOCUMENT_TOKEN_TO_BE_REPLACED

By LEWIS SPEARMAN
HIGHLANDS  A meeting attended by 45 surrounding areas residents at the Highlands Community Center had representatives of the Environmental Protection Agency (E.P.A.), Texas Dept. of State Health Services, Agency for Toxic Substances and Disease, Harris County Health Department, Congressman Gene Greens Office and Texas Commission on Environmental Quality (TCEQ) to continued the dialogue with the surrounding community concerning the San Jacinto River Waste Pits Superfund Site.
The Public Health Assessment reported on the removal efforts of sediment from three Waste Pits on about 20 acres of land situated on the West bank of the San Jacinto River just North of the I-10 Bridge contaminated with polychlorinated dibenzodioxins and dibenzofurans.

This substance is largely from paper bleaching agents dumped at the site. Land has subsided since a paper mill began pouring waste there between 1964 and 1973 (mostly 1965 and 1966) such that two of the pits are now below water.
The location had been a popular fishing location and the highest level of cancer causing agents are found in blue catfish and crabs near the location followed shortly by Hybird Striped Bass then Spotted Seatrout. Any fish from these pits are likely to have 2.04 pg/g. It might strongly be suggested not to eat fish or crabs from near these locations and avoid wading near these Federal Superfund pits.
Sand was once mined from northwest of these locations, according to the University of Houston in a Dioxin TMDL Project Report. Where the sand went is unknown. Levels of concentration of dioxins in the mined sand is also unknown. Sand from the contaminated pits has washed downstream during heavy rains and runoff.
Depart. of Health and Human Services evaluated 7 on-site samples and 4 off-site samples from samples collected by the TCEQ. According to E.P.A.s Stephen Tzhone contamination of collected samples appeared diminished substantially the farther from the sites on the river. The contamination seems to be tied to sediment in the general area. Oral contact with sediments, having the sediment on your skin and eating fish or crabs containing higher levels of dioxins and furans are the likely ways to be exposed to the apparent cancer causing agents.
It was determined that exposure from airborne dust is unlikely, groundwater exposure is unlikely and surface water injestion is less likely.
Children, subsistence fishermen and sporadic fishermen over years near the location were most likely to be effected negatively by exposure.
Specifically the sites that had the highest measured contamination was at the sand pits (15,594 pg/g,) near the sand pits (82.24) then the Houston Ship Channel above and West of the San Jacinto River(65.69.) Next the contamination was Up-Stream and tributaries (15.97) and downstream from the pits (13.75.) Of all locations sampled off site only 40.04 pg/g were measured. It is suggested that 100 pg/g per year is dangerous and increases the risk for cancer.
Tom Hill of Tug Boat Marina asked some pointed questions concerning the contaminations. His questioned groundwater contamination, economic loss for businesses from contamination, how far North of I-10 has been contaminated and what effect Hurricane Ike had on spreading contamination. After those questions he addressed is the site being stabilized or is the contamination being removed. Then he asked what are the reparations or cost recovery for businesses effected by the contamination.
Hill asked the study makers to come out and test the ground water of nearby houses to give assurance of the drinking water being free from contamination. Hill was kind enough to point out that the representatives are there to fix the problems and did not cause the problems.
The data to completely say how effected by toxins the farther away areas are has yet to completely be concluded but samples show less concentration in areas away from the pits. Dioxin levels within a half mile radius of the pits show low levels, so levels they are not considered different from most other locations.
New location studied
A new location has been identified as possibly contaminated over South of the Superfund Pits on the other side of the I-10 Bridge on a longer strip currently near existing businesses and houses.
Jim Strouhal specifically pointed out to the public that the new location was being studied for benzene, chloroform, naphthalene and other contaminates not related to the Superfund Pits should be paid attention. He said, If you have a water well within 5 miles of 18310 Market Street, those people and anyone else that is interested should be at this meeting to find out what this Municipal Setting Designation by the City of Houston is about and is another issue of which we should all be aware.
Concurrently with the Remedial Investigation, a Time Critical Removal Action is implemented to stabilize the source of the Site contamination. Currently about 40,330 tones of the sediment has been placed as of May 10, 2011. The average placement of the toxins is about 750 tones per day. This placement is about 65% complete and on target to meet the E.P.A. schedule.
The E.P.A. is accepting comments on this site until May 31, 2011. For more information on the Public Health Assessment visit on-line www. dshs.state.tx.us.epitox.posted or one can visit the Stratford Library at 509 Stratford in Highlands.

END_OF_DOCUMENT_TOKEN_TO_BE_REPLACED

Come on Down: The Price is Right for Crosby resident 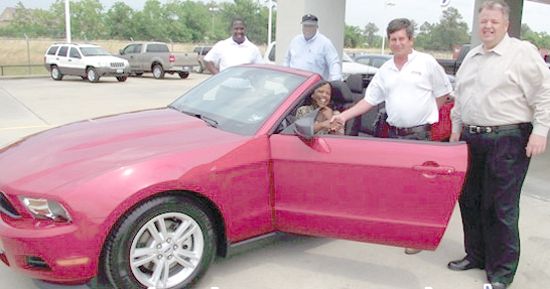