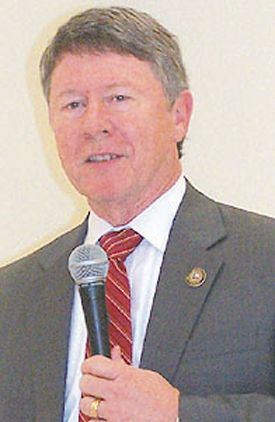 By LEWIS SPEARMAN
CROSBY Harris County Judge Ed Emmett addressed the Crosby/Huffman Chamber of Commerce on county problems and projections. It was not the usual talking points with the same old promises as made for the last 20 years. This time someone with an understanding of how the logistics of the county actually get dysfunctional made a suggestion on how the county can save money.
Here locally the county has problems that are going to start eating our lunch. The criminal justice system, right now the jails are overcrowded, we are sending prisoners to Louisiana and other counties. We have to get some of those people out of our jails. The first people we need to get out of our jails have mental health issues. They are our frequent flyers, we see them over and over.

When I became County Judge I thought I was going to be a transportation guy, now I am much more of a mental health guy. We have got to address the mental health of our county. The largest mental health facility in the State of Texas is the Harris County Jail. On any given night, there are more people there receiving psychotropic medications than any other facility in Texas. That is fundamentally wrong, I dont care if you are a Republican or Democrat it is wrong. Yes, they have committed crimes but we take them in for the term of their sentence and set them loose and say Have a nice life. What we want to do is take them at the appropriated number of hours before they are released and take them to a reintegration center and introduce them to good flight M.H.M.R.A. or Systems of Hope or anybody else who can provide services. M.H.M.R.A. can provide mental health services for about $30 a day in the jail we spend about $300 to $500 a day. When I hear someone say, We dont have the money build a new reintegration center, I say we dont have the money not to build one. We cant keep doing what weve been doing. said Emmett.
On indigent health care the county is obligated by federal mandate to keep treating those that show up at emergency rooms and beyond that treatment must prevent a pandemic from breaking out in this County. We need to start spending our money on preventive care not on emergency room care. What is happening so many do nothing and end up in emergency rooms. There is nothing more expensive and emergency repair a fraction of that amount of money in preventive care and we have better outcomes.
Emmett took on the issues of statewide financing and school education next.
Emmett had been in the Texas House 1979 until 87. He chairman on the Energy Committee and Transportation Committee. In 1989 President George H. W. Bush nominated him to the Interstate Commerce Commission, he was confirmed and served for three years.